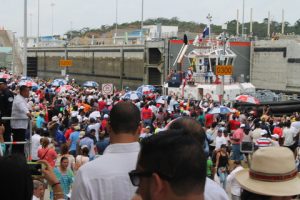 From theory and simulation to practice to reality, the new locks of the Panama Canal have changed the theoretical approach of the Canal people  and the text books of the world.

As in 1914, when WWI took all the headlines and relegated the Panama Canal opening  to the inside pages, last month, when the modern expansion of the Panama Canal opened, again the international press did not give much importance to it.  For instance the BBC devoted less than 30 seconds in their major news programming to the Panama Canal, a victim of the many hours allotted to the Brexit vote as the major item by far of that particular week. 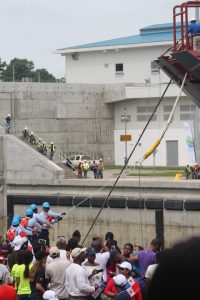 Now, one month later and with the  ink on the papers for the grand opening of the Canal expansion scarcely dry, suddenly I find that Panama is making headlines, and for all the wrong reasons.

Thousands like me, in the special public viewing area by the locks on Sunday 26th June watched in admiration the first official transit through those new locks. The honour went to an enormous ship, the Cosco Shipping Panama, with a length of 299.98 m and breadth of 48.25 m, this meant a tight fit in a lock measuring 49 m – less than 38 cm spare on each side to keep clear of the wall.

Now with Brexit being old news and terrorist attacks well documented and summer upon us, the press is looking for something different. It seems that the scratching of one of the neo-panamaxes or the loss of a fender, while going through a 30-day-old lock has caught the attention of certain  journalists, and they are having a field day, without mentioning all the facts and all the human endeavour. 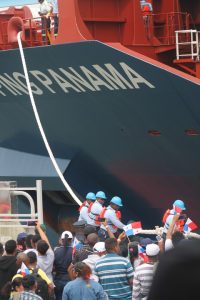 …and off she goes through…

Those locks were built in the middle of fields, and now there is a canal full of water coursing through, a volume which is recyclable three times. A saving of 60% to ecological benefit is not as important to today’s press as the scratch of a ship as the efforts of all the men who built the project, some at the cost of  their lives, an engineering feat that transormed world trade.

It is a path that is giving peace, prosperity and dictating the way ships are built and markets are trading. This little country with its Canal is a major player in the region and offers a new outlook and opportunities after its huge upgrade.

The Panama Canal programmed various actions to ensure its personnel were trained to maintain effectiveness and safety in every step of transit operations.

The integration of Canal operations and the new set of locks is not child’s play and the commitment to safety and to the users are very high on the Canal authority’s agenda. 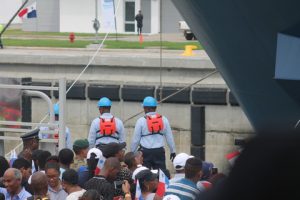 In an interview for the magazine El Faro, Capt Guillermo Manfredo Jr, a senior pilot who is Canal Operations Director said that “the prepared tasks and schedules for the new transits were made using all the available tools in the market; starting with theory classes given in the Canal’s own Simulation, Investigation and Maritime Development Centre (SIDMAR) and also involving the different divisions of the Panama Canal. The three simulators of the SIDMAR centre were used. One of them in particular is a 360 degrees simulator that allows tug masters to have a ‘real’ transit in the canal, and includes the new locks and the new navigation routes and lanes.

“A few months ago the Manoeuvring Centre opened, with models made to the scale 1:25 and this is another step in training for the pilots and tugs masters. The chosen pilots, line handlers and all the team at the locks have gone through a process of education for the new operation”. 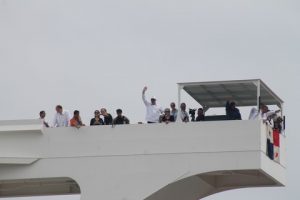 The Salutation of exceptional success!

Capt.Manfredo continued in his interview: “The last step to integrate all the teams involved in the transits through the new sets of locks was the arrival on June 8th 2016 of the [contracted neopanamax dry bulker] Baroque. The Baroque mission was to integrate the theory, the human, technical and logistic resources needed to operate the new locks in the real world.”

The Baroque has a length of 255.3 m and a breadth of 43 m. The ship was at anchorage on the Atlantic side and on the Gatun Lake to make in real time the transit through the three chambers of the Agua Clara locks.

The goal of the Canal chiefs was to train pilots and five complete tug crews, as well as line handlers and all personnel involved in the transits. 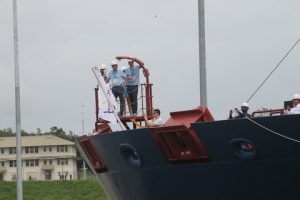 The presence of the Baroque was to validate the procedures already established and designed by the Panama Canal Authority, to satisfy the strict standards expected by the maritime industry.

The Panama Canal has changed once more the trade patterns of  world commerce, the major ports are digging their ports to accommodate such large vessels, and once more, this magnificent engineering feat has not been given the importance that it deserves. On the contrary, lacking a intelligent interpretation of news, the world press is giving importance to the first scratches during a transit, without even meditating on the efforts and re-training of marine professionals who have an impeccable record. 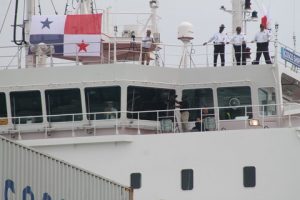 One of the World’s mostly known banners!!!!!

New locks, new measures and even new ships, factors of wind, tides and currents, all play a significant role, and enormous thanks is due to the Panama Canal personnel, as I would not like to think what state the Canal would be in if they were not available when the captain of a ship sought to get through the new locks with a new ship under conditions never experienced before.

I have had the privilege to meet canaleros: pilots, analysts, cable handlers, technicians and tug masters, etc. All of them are very hard workers and have spent decades always learning, always improving, and always giving their best. The Panama Canal accident rate is low, and the administrator a hardworking man who has devoted his life to the Canal. These are people loving their work, their country and the shipping industry. They deserve recognition and respect more than ever. 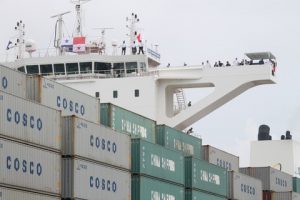 The pride of the Panama Canal goes through; a new era begins with boxhips having their day!