The limited edition Team Singapore MyStamp sheet is priced at S$20.00 and honours the Singapore athletes for their efforts and achievements at this year’s Olympic games. The total face value of stamps is S$6.60. 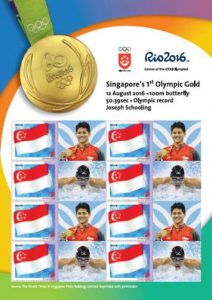 Mr Woo Keng Leong, CEO (Postal Services) of SingPost, commented: “As the nation celebrates a historic Olympic Games for Team Singapore, SingPost is pleased to collaborate with the Singapore National Olympic Council to issue these special edition MyStamp sheets. Together, we commemorate the Team’s achievements. With these stamps, every Singaporean can own a piece of this milestone. Most importantly, these stamps demonstrate our support of Singapore’s talented athletes and their pursuit of sporting excellence at the highest levels.”

SingPost will contribute all net proceeds, or a minimum of S$10,000.00, to the Singapore Olympic Foundation.

These MyStamp sheets will be available at all Post Offices and the Singapore Philatelic Museum from 29 August 2016. They may also be purchased online atwww.stampdelight.com.

Pre-orders will be accepted at all Post Offices and online atwww.stampdelight.com from 22 August 2016.

SingPost is celebrating Singapore’s first Olympic gold medal with two commemorative slogan designs. Most stamped letter mail from now until 9 September 2016 will be imprinted with the commemorative postmarks. The designs for these are based on the themes of ‘Stamp of Distinction’ and ‘Stamping Greatness in 50.39 Seconds’.