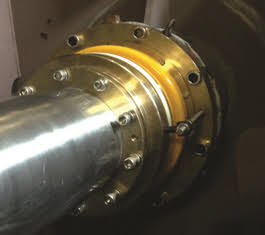 Hownblower, one of the leading river cruise operators in the U.S., operates a fleet of 70 sightseeing and dinner cruise vessels in several cities across the Golden State, the United States and Canada.

After several years of development, Thordon Bearings introduced the TG100 mechanical seal in 2013 for small vessels operating water-lubricated propeller shafts in both abrasive and clean waters.

Scott Groves, Thordon Bearings’ Business Development Manager – Marine, said: “We are delighted to add Hornblower Cruises & Events to a growing reference list of vessels operating TG100 seals. The Inspiration Hornblower crew will be the main beneficiary given that the seal is maintenance-free and has no required spare parts within the first 10 years of operation.”

Since its market introduction, Thordon Bearings has supplied more than 180 TG100 seals to operators of a wide range of vessels, including workboats, naval patrol vessels, ferries, yachts, tugs and tow boats.

A unique feature of the TG100 is the emergency seal that permits stand-alone operation to allow the vessel to safely return to the nearest port, preventing permanent seal damage. The unique omega “O” shape of the proprietary elastomeric bellows minimises torsional vibration and maintains the required spring force throughout the allowable range of axial shaft movement. This elastomeric bellows has no shelf life and no scheduled replacement.

“While the TG100 seal is effective as a stand-alone installation, the optimum solution is in combination with our water-lubricated RiverTough tail-shaft bearings, which have now been installed to more than 400 vessels,” said Groves.

RiverTough and TG100 combination packages have also been ordered for installation on 14 pushboat vessels operated by a Columbian owner.