A nostalgic day on the S/S John W. Brown

A few weeks ago a friend invited me to spend a day visiting an authentic U.S. Liberty Ship. The ship was the S/S John W. Brown. The Brown is a restored stunning example of the thousands of Liberty ships each built in just a few weeks, in the early 1940’s, which supported the Allied war effort in World War II. These ships also plied the Atlantic in the war post war recovery, after 1945 and into the decades of the 1950/1960s. The Liberty Ships played the most dominant role in supplying post war Europe while recovering from the War’s devastation.

My dad was a Master aboard the S/S Sea Garden, a Liberty ship owned by Peninsular Navigation, a small Liberty and Victory fleet based in New York. Captain John Faraclas was also a minority partner in Peninsular. Two of my uncles also served as Masters on Liberty ships.

In an effort to cement our relationship with Dad, the family was together on the Sea Garden every summer, for about 12 years. The slow crossing, (Liberties topped out at about 12 knots), also created a unique bond with my two brothers, since we were the only kids on the ship. We spent our time on the ship by keeping a log, staying up to date on our studies and most enjoyably by participating in the in the maintenance of the ship. The daily walk down to the Engine Room and participating, in a very minor role assisting the Oilers was always a highlight. We prepared for the Engine Room work by inserting a rag in one back pocket & a flashlight in the other. As children we deemed this as part of the uniform for anyone working in the Engine Room. 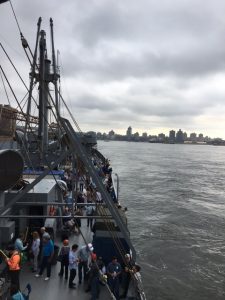 A view of visitors on the deck

About 6 weeks ago a neighbor, who was also a Master, advised that the John Brown was calling at a Downtown berth located on the East River, and that a ship tour and four hour cruise, meals and entertainment were being offered. Naturally I jumped at this opportunity and on September 18th spent a very emotional day on this beautiful ship. I visited my quarters on the 3rd deck, in the former Cadets quarters, where I slept with my brother Nick and spent the entire day walking around the ship in every area. Most surprisingly everything about this ship was familiar and I never was in area that I did not remember most clearly. I actually was asked by the touring maritime officionados to relate my experiences and assist in familiarizing them as to the Ship’s layout and my experiences on board the Sea Garden.

The Brown, after she was retired from service, was run by the New York City Board of Education, as a Maritime High School and served in that role until the mid-1980s. Many of her graduates moved onto the NY. State Maritime College and the US. Maritime Academy, the US Coast Guard and of course the US Merchant Marine. 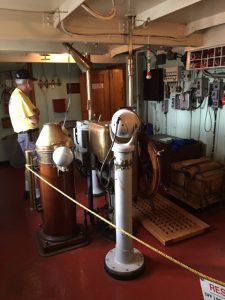 Since then she has been maintained by volunteers, retired or former seamen, and is now headquartered in Baltimore. These volunteers do a remarkable job caring for the vessel. The ship was in top military condition. The crew even fired the guns that were still mounted in their torrents.