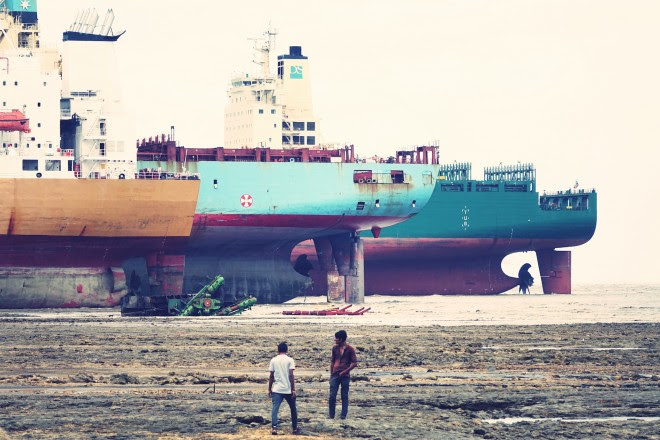 Brussels, 13 October 2016 – Investigative journalists from Danwatch today release their comprehensive report on the reality inside Shree Ram shipbreaking yard in Alang, India, where the Maersk Georgia and Maersk Wyoming are currently being dismantled. The in-depth investigations reveal breaches of labour rights, workers exposed to grave risks for their health and safety, and severe environmental pollution caused by the breaking of ships in the intertidal zone. The story first came out on Sunday in the Danish newspaper Politiken, and has been covered widely in Danish media. The investigation not only confirms the serious concerns with the beaching method which the NGO Shipbreaking Platform has been voicing all along, but it shows that Maersk’s shipbreaking practices do not even remotely meet the standard the company has set for itself.

“The unacceptable conditions in the beaching facility in Alang which Maersk has been praising for its alleged high standards can no longer be ignored. Journalists have documented workers without contracts and men endangering their health and lives when exposed to toxic fumes and risks of explosions when torch-cutting in only T-shirts. When asked about the environmental impact of their activities in Alang, the world’s leading ship owner does not have an answer. Maersk’s trial and error approach in India is seriously flawed. The conditions under which the Maersk ships are being broken are even worse than what we expected,” says Patrizia Heidegger, Executive Director of the Platform.

The Platform and the Clean Shipping Coalition have strongly criticised Maersk for its U-turn from state-of-the-art ship recycling back to the beaching yards in India [1]. Over many months, the Platform has shared its concerns with the shipping line. The Platform’s detailed critique of the Maersk “Responsible Ship Recycling Standard” highlights why the Standard is far too weak to ensure the health and safety of workers and to provide safeguards against pollution.

Not only have NGOs warned Maersk of the serious risks, the shipping line itself commissioned a report on the pitfalls of breaking ships in the intertidal zone. Danish consultancy Litehauz highlighted severe pollution risks and the lack of solutions on the Alang beaches. The report clearly states that huge investments to build adequate infrastructure would be necessary in Alang, and questions the commercial viability of investing in beaching yards, especially because some of the problems are likely to be impossible to solve in the intertidal zone. Despite the warnings, Maersk chose to ignore the concerns of environmental and human rights experts.

“Maersk expects to make an extra profit of 150 million USD by selling off an estimated 70-100 ships to the beaching yards. While masking their U-turn as a ‘good deed’ for India, Maersk has not invested a single penny in new infrastructure in Alang”, says Patrizia Heidegger. “Instead of pocketing this huge extra profit, the world’s largest ship owner should just stick to its previous off-the-beach policy. And if Maersk wants to support a real shift in India, why are they not investing this amount in a state-of-the-art facility off the beach?”

Danish experts with whom the journalists have shared their documentation were shocked to see the serious risks for workers’ health and safety as well as the grave environmental impact of Maersk’s practices in Alang. Had this happened in Denmark, the yard would have been closed on the spot, they say. The UN Special Rapporteur on Toxics and Human Rights, Baskut Tuncak, also emphasises that the beaching method by its nature does not allow for environmentally sound practices.

Only last December Shree Ram received a Statement of Compliance with the Hong Kong Convention from the Japanese classification society ClassNK. Such statements have been used by industry stakeholders to claim vast improvements in Alang and that the beaching method is able to provide acceptable levels of environmental protection. Shree Ram is supposed to be one of the “best” yards in Alang. The Danwatch revelations clearly show the wide discrepancy between the industry’s greenwashed presentation of Alang and the factual conditions in the yards. ClassNK did not want to comment on the breaches found by the journalists, but has earlier stated that their certification of four Alang yards is only based on procedural checks, not performance.

Members of the Danish Parliament, led by Pia Olsen Dyhr, former Minister of Trade and Transport, now request the Environment Minister to respond to whether Maersk has put pressure on the Danish government to promote the Alang beaching yards at the European level. Beaching is banned in Denmark and the rest of the EU. A new Regulation at the EU level asks the European Commission to publish a list of acceptable ship recycling facilities globally. Shree Ram is known to have applied to be on that list, but is not expected to be approved. The findings of the investigations by Danwatch and Politiken render this impossible.

“The findings at Shree Ram show how meaningless statements of compliance with the Hong Kong Convention are, and underlines that the Alang yards come nowhere close to providing the safeguards needed to ensure truly clean and safe ship recycling”, says Patrizia Heidegger. “The lobbyist of beaching have been cornered with their green-washing. In light of these revelations, their attempts to put pressure on the European Commission to list these beaching yards as acceptable seem even more pitiable”.