Ugo Salerno, chairman and chief executive of classification society RINA, has strongly reiterated his organisation’s backing for additive manufacturing, or 3D printing as it is more commonly known.

Mr Salerno was speaking at the 2016 annual conference of the International Union of Marine Insurance, in Genoa, the city where RINA has its head office.

He said: “The real challenge is continuous and fast innovation. We are at the start of a real industrial revolution. All the parties of the industry must work together.”

RINA is among a select group of leading businesses in marine and offshore that have advanced into research and practice of the special technique. 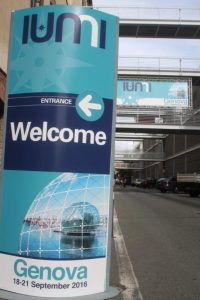 IUMI at forefront in Genoa.

Mr Salerno highlighted the society’s link with Rome-based Centro Sviluppo Materiali D’Appolonia. RINA in 2014 took a majority stake in CSM, with Mr Salerno at the time describing the deal as “an important step in our long-term growth strategy.” CSM was founded in 1963 by Italy’s major steel manufacturers and end-users with the mission of developing steel technologies and applications.

CSM is developing prototypes for “a complete new way of designing parts where there is availability of the right basic material powders.” In the process, digital 3D design data from a CAD (computer-aided design) basis  is used to build a component one layer after another of metallic or other substances, hence the term additive manufacturing. Although AM is well-established in the aerospace and medical sectors, it is now beginning to be rapidly adopted in the Energy and Marine sectors.

Mr Salerno said that additive manufacturing is used for example in aerospace to build high technology pieces.  “If they can be used on spaceships, why cannot they be used on ships at sea?”

Hyundai Heavy Industries, the world’s largest shipbuilder, is planning a larger application of 3D printing, foreseeing that implementing such manufacture into the product flow could save around $1.8bn a year.

Among shipping companies, Maersk has 3D printers on board some of its ships. Instead of sending for spare parts to a ship, replacements can be built on the spot, avoiding voyage hold-ups, said the RINA chief. This would reduce repair time and avoid costly warehousing. There were estimates of a 40% reduction of labour costs, and 90% faster repairs.

According to the independent site www.additivemanufacturing.com, “AM application is limitless. Early use of AM in the form of Rapid Prototyping focused on preproduction visualisation models. More recently, AM is being used to fabricate end-use products in aircraft, dental restorations, medical implants, automobiles, and even fashion products”.

Experts at hydrodynamics research organisation Hamburg Ship Model Basin have said that the technology is particularly useful for manufacturing appendages such as rudders and for energy-saving devices, especially important because of tighter emissions regulations.

In addition to RINA, other leading classification societies are paying close attention to developments. Lloyd’s Register, in conjunction with engineering research and technology firm TWI, launched in 2015 its goal-based additive manufacturing guidance notes to industry.

He cited the involvement by the multi-national company GE, which a few days earlier had announced plans to acquire for $1.4bn two suppliers of additive manufacturing equipment. GE chairman and chief executive Jeff Immelt said of the deal: “Additive manufacturing is a key part of GE’s evolution into a digital industrial company.” GE has invested some $1.5bn in manufacturing and additive technologies since 2010, and has 346 patents in powder metals.

On other technological developments, Mr Salerno referred to the possibility of autonomous and unmanned oceangoing ships at sea by 2035, and he was “almost 100% sure that we will see it, but the technology will allow it.” He reminded underwriters at the IUMI conference that e-navigation also meant risks, underlining the $445bn annual cost to the global economy from cybercrime.