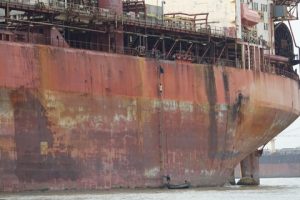 A Maersk oil ship is just now being scrapped in a dangerous shipbreaking yard at the infamous Chittagong beach in Bangladesh. Danwatch can furthermore reveal that, in 2014 Maersk pressured its partner to send 14 container ships to Bangladesh and India for scrapping.

Two new Danwatch investigations reveal the controversial actions, that have already made investors demand an explanation from Maersk.

Head of Sustainability in Maersk, Annette Stube, admits that Maersk has not been good enough to ensure that the ship was sent to scrap to a secure yard. She emphasizes that Maersk is “really, really regret that this has happened.” 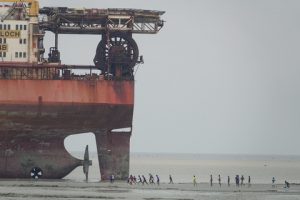 Another view of the beached Producer – photo credits: S. Rahman

Janata Steel shipyard in Bangladesh, where the Maersk oil ship is now being scrapped, violates both national legislation and international standards. The workers bear no safety gear  despite the fact that they breathe in dangerous gases from torch cutting, and the fact that there is a high risk for fatal accidents. This year alone, 17 workers have lost their lives in the shipbreaking yards in Chittagong, Bangladesh.

Maersk has for years publicly distanced itself from the shipbreaking practices in Bangladesh which do not live to the Hong Kong Convention or Maersk standards for responsible ship recycling.

Although Maersk regrets that its ship ended up in a dangerous shipbreaking yard in Bangladesh, the company says that the ship is not its responsibility.

“It is the cash buyer, who sent the ship to Bangladesh, who is responsible,” says Annette Stube, who is head of sustainability at Maersk.

Danwatch also reveals that, this is not the first time that ships from the Maersk fleet end up in Bangladesh.

Leaked documents, which Danwatch have gained access to, show that two years ago Maersk played an active role in sending 14 container ships to scrap at some of the world’s deadliest shipbreaking yards in Bangladesh and India.

The confidential documents, Danwatch have gained access to, reveal that Maersk demanded of  the owner of the 14 ships, German MPC Flottenfonds III, that it should do its utmost to achieve the highest possible price for the scrapping of the 14 container ships that Maersk had hired for nine years. A requirement which in practice meant that the ships could only be sent to scrap in substandard and dangerous shipbreaking yards.

Danwatch confronted Maersk with the confidential contracts, and the company acknowledged that it should not have pressured MPC Flottenfonds III to scrap the ships at a high price.

“The termination contract indicates that the vessels were dismantled in facilities that do not live up to Maersk’s standards. It is highly unfortunate. We admit that, we should not have entered into an agreement that influenced the owner to seek the highest price for the steel,” Annette Stube from Maersk says to Danwatch.

Viewers can find the the investigations in English here:

MAERSK AND THE HAZARDOUS WASTE IN BANGLADESH

MAERSK AND THE SHADOWY DEALS