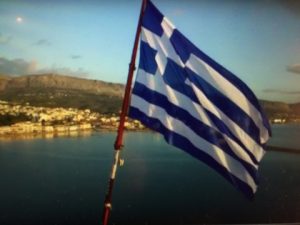 A huge Greek Flag (150 sq.m) proudly waving in the Port of Chios, Eastern Aegean, Greece, for the celebrations of the 76th Anniversary of the 28th October 1940, the day that will remain in Greek and World History written for the heroic “NO” of Greece to Mussolini who wanted to freely parade in Greece, triggering Greece’s entry into the fry-pan of WWII.
We are indebted to Konstantinos Milt. Anagnostou for yet another excellent video.
Viewers can log herebelow and see this unique video which serves as a timely message to those disrespecting history and international treaties. It also serves as a reminder to the current and future generations of Greece and all on Planet ocean in respecting humane and national freedom / identity.
Long live Chios, Long Live Greece, Long Live the 28th of October 1940, Long live those blessed Seafarers Greeks and form Greece’s Allies who gave their lives in the name of freedom, losing same in the cold waters of the oceans, particularly that of the Atlantic in the name of Universal Freedom!