Surviving in a Changing Environment…

It was a worrying start. Underwriters in the offshore energy sector who were present at a debate at the International Union of Marine Insurance 2016 conference saw that the panel discussion was given the heading “We’re all doomed!”.

Were things really so bad? Simon Williams, chairman of the IUMI offshore energy committee said after the session had offered unnerving market insights but some glimmers of rising oil demand: “We were almost doomed… I am so glad we came back.”

A series of presentations was given under the more prosaically-worded title Surviving in a Changing Environment.

Stewart Williams, a senior research vice-president at Wood Mackenzie, set the tone by exclaiming: “It has been brutal out there. The response of oil companies [to the downturn] has been very quick. When oil prices were high, oil companies basically got fat and lazy.”

Most oil companies have cut dividends, and spending in 2015 fell 25% compared with the previous year. There was a big squeeze on rig rates paid to contractors, and a big increase in borrowing – some companies were even borrowing to pay the dividend. There was a stark drop in mergers and acquisitions, following Shell’s takeover of BG in 2015. Distressed companies are holding on, borrowing as much money as they can to sustain their debt, said Stewart Williams.

The first thing that took the brunt of cost cutting was exploration, the Wood Mackenzie man continued, and in 2016 this was continuing. Upstream investment had fallen 40%. He had lived in Scotland for 20 years and never seen rigs before in the Firth of Forth; the Cromarty Firth was full, and “now rigs are stacked further south.” 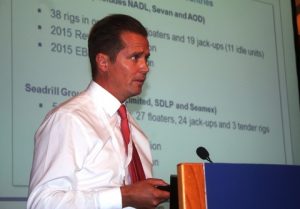 Seadrill is one of the largest companies of its type, with renowned marine entrepreneur John Fredriksen as chairman and major shareholder. Seadrill operates in more than 18 countries, and had earnings before interest, tax, depreciation and amortisation  in 2015 of $3.6bn.

The oil price at the time of Mr Bergstad speaking was $49 per barrel, down 57% from its peak at $114 in 2014 [the oil price rose slightly after Opec and Russia proposed production cuts totalling 700,000 bpd in a deal due to be confirmed at the end of November 2016, but in early November fell back a little to around $47]. The exploration and production spend was down 23% in 2015, with a further 15% cut forecast for 2016. “We have had it too good for too long. We just have to admit it,” said Mr Bergstad.

Despite this, he said, the fundamentals were that “the world needs more energy, and it has to come from oil and gas. Offshore is competitive and sustainable.”

He said: “We know that a lot of Opec countries are producing oil at a price which is not sustainable.  This has to change.” If the oil price reached $54, it would challenge American shale oil. “Sooner or later, the market will come back.” More than half of production growth through 2020 is expected to come from the offshore segment.

Morgan Stanley Research had made a base case forecast of demand rising from 80.2m barrels per day to 84.2m from 2015 to 2020. The marginal cost of extraction suggested prices must rise.

As the downturn continued, though, customer discussions had become more and more difficult. Demands to re-negotiate contracts and simply cut day rates were increasing. Some oil companies were willing to terminate high dayrate contracts and pay penalties, because they had no work, or could sign up another rig and still pay less overall.

“Traditional” drilling contracts were being challenged and “new” solutions introduced.

Seadrill had made 2,500 people redundant and unfortunately would probably have to make another 1,000 redundancies, said Mr Bergstad.  The group had been aiming to have 12,000 people, but by September 2017 would probably be at only 5,000.

The group had 16 of its 54 rigs laid up. Delivering on four priorities “will help us through the challenges of 2016/17: safe and efficient operations; savings and cost competitiveness; refinancing plan; and customers and backlog.”

In answer to a question during a panel discussion about dismissals of staff causing a looming skills gap, Mr Bergstad admitted: “They do come back, but we have lost a lot of competent people who will never come back to the industry.”

Andrew Jackson, head of energy claims at WillisTowers Watson, London, presented statistical tables, a speciality in which he is an industry leader.  Mr Jackson said that 2011 – the underwriting year following the semi-submersible Deepwater Horizon explosion in the Gulf of Mexico – was a spectacularly bad one for market losses: the worst on record for downstream and natural catastrophe insured and uninsured losses.

It was too early to have an accurate claims overview for 2015 (but it was “creeping up there”) and far too early for 2016, although there were reports of a big loss in the Jubilee field offshore Ghana. According to the Willis Energy Loss Database of upstream energy losses (incidents in excess of $1m) if the 2016 loss record matched 2015, underwriting losses would almost certainly result.

In April 2016, in its first Energy Market Review under the merged title WillisTowers Watson, the firm had said that the industry is facing possibly its greatest challenge for 50 years, as oil prices plunged and inventories reached record levels. It said that reduced risk management budgets brought about primarily by the collapse in oil prices were having an increasing impact in 2016, as programme limits reduced and self-insured retentions increased. As a result, the available premium income pool continued to be eroded, particularly in the upstream sector where the lack of new projects and the scaling back of major drilling operations contributed to a significant overall reduction in premium.

It is noted that many of the leading corporations use captive rather than commercial insurance, and mutuals also have a big slice of offshore insurance business.

Earlier, Simon Williams (who is head of marine and energy at Hiscox, London) had spoken of another relentless rise in insurance capacity, a factor which makes it difficult for underwriters to defend individual premium levels. Upstream operating insurer capacity in 2016 was estimated at $7.5bn. Ten years previously, it had been somewhat above $2bn.

“Rating levels are now moving into late 1990s territory. Sooner or later the market will have to turn – but when?” asked Simon Williams.