Top Posts
Don’t take chances where your health is concerned…
What a week that was: Falling Markets, Warring...
New Hapag-Lloyd East Africa service arriving in Kenya...
American Club member Alert (May 14, 2021) –...
Hot Port News from GAC
Alternative events for Paris 2024 approved by World...
Daphne Technology seeks financing through crowdfunding platform
PRIME’S DAILY MARKET REPORT MAY 14, 2021
GLOBAL & REGIONAL DAILY (Friday 14 May, 2021)
Seaboard Energy has chosen Topsoe’s HydroFlex™ technology to...
Inflation surges in the US, but ECB may...
Home HRAnniversaries The brilliant event for AMVER 2016 and the Celebration of 80 years of Propeller Club in Greece!
AnniversariesAwardsClubsCorporate Social ResponsibilityEventsPeople and Places

The Board of Governors with USA’s Ambassador to the Hellenic Republic H.E. Geoffrey R. Pyatt

On Monday, October 31st, 2016, the annual AMVER Awards Ceremony of the International Propeller Club of the United States, International Port of Piraeus, was celebrated with great success, this year combined with the Piraeus Propeller Club’s 80th Anniversary, the venue being the Intercontinental Hotel of Athens, Greece.

The President of the PCP, Mr. George Xiradakis welcomed hundreds of guests and said that the attendance of so many people causes euphoria perfectly reflecting the rays of the Propeller Club into society. He welcomed the U.S Ambassador as well and officially announced the taking of his office as honorary Chairman of the Piraeus Propeller Club wishing him good luck in his new duties, quoting the words of Henry Ford, which essentially describe the secret of success of the Propeller Club of Piraeus in the eighty years of its life: “Coming together is the beginning, continuing together is progress, working together is success”.

Mr. Xiradakis also congratulated the shipping companies that participate in the AMVER program, noting that this major part of Greek Shipping, proudly maintains the Greek vessels & Greek flag at the highest level of the global shipping industry, evidencing its major devotion of social responsibility to the global community through saving lives and property at sea.

The U.S. Ambassador in Greece Mr. Geoffrey R. Pyatt in his maiden speech in front of the members of the Propeller Club and generally the Greek shipping family, praised the role of the Club as an aid to the development of human and business relations in the world and especially to the maintenance and development of the relationship between Greece –US. He welcomed the Greek Minister of Shipping to the event and he referred enthusiastically to his desire for good faith and constructive cooperation with the Greek Government during his term of office in our country, in order to further develop the Greek-American relationship. “The biggest challenge currently for the relationship between our Countries is the preparation of the historical visit of the US President during November”.

The Greek Minister of Shipping in his speech congratulated the organizers for the excellent event. He assured the new Ambassador of the United States about his desire and that of his colleagues to continue the constructive cooperation of maintain a relationship between the two countries. He congratulated the companies which were awarded for their participation in the AMVER Rescue Network and he expressed his satisfaction to them for keeping the characteristic of Greek shipping unaltered through their continuous social contribution. 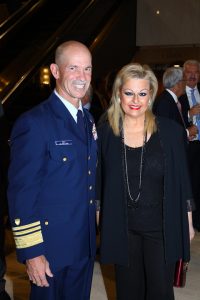 Mr. Charles W. Ray, the Vice Admiral of the US Coast Guard addressed greetings to the large audience and stressed the importance of saving lives at sea and of course everywhere else. He congratulated the Greek Shipping industry for its participation in the AMVER Network while he spoke with great words about the constant struggle of the Greek Coast Guard, especially nowadays where a dangerous wave of mass emigration is taking place. Mr. Ray congratulated the Propeller Club Port of Piraeus for the event.

The meaning of this year’s Awards was depicted by the special Rescue Awards, which were presented to five companies, by the Vice President of Southern Europe and North Africa of the International Propeller Club, Dr. Konstantinos Rokkos.

The vessels honored for rescue operations were:

Also awarded was Mr. Panos Moraitis, Founder of ERCI – Emergency Response Centre International and CEO of ASPIDA for the valuable assistance provided to the human treatment of refugees. The ERCI has faced many difficult rescues, the work continues with the refugees coming to Greece through the voluntary work program.

The Secretary General, Mr. Costas Th. Kontes stressed before the award ceremony 1685 vessels from 212 Shipping Companies that: “This year’s AMVER revealed the perpetual dedication of Greek Shipping in life rescue at sea and the full support of the Greek seafarers to human beings distressed at sea, he highlighted the altruism and the unparalleled solidarity that characterizes the people of the shipping industry worldwide”.

The first fifteen companies out of a total of 170 that awarded were:

A special moment of the evening was the Special Award prize “Champions reward the Champions” to the President of the Greek Olympic Committee Mr. Spyros Kapralos, who inspired and implemented the program “Adopt an athlete on the road to Rio,” which was intended to find sponsorship for the participation of athletes in the Olympic games in Rio.

The emotional presence of Gold medalist in Still Rings Lefteris Petrounias, the presence of Olympic medalists in Sailing, Panagiotis Mantis and Pavlos Kagialis, the Chief of the National Team in Water Polo Christos Afroudakis, the World Champions in swimming Kelly Araouzou and at pole vault, Kostis Filippides, as well as coaches Nikos Gemelos and Dimitris Gemelos, to Olympic Champions, spread a wave of euphoria and emotions amongst the attendees. Τhe presence of Olympic Athletes who honored the President of the Greek Olympic Committee Mr. Spyros Kapralos, was momentous, same by recognizing his personal contribution and the continuous effort, which aimed to the excellent presence of the Greek Olympic Mission in the Rio Games. The Propeller Club awarded for the creation of such fundraising, Mr. Kapralos. Our Olympic Athletes were given a special recognition plaque for their contribution to the international recognition of our country.

The Governor and Chairwoman of the Fundraising Committee of the Propeller Club, Mrs. Zoe Lappa-Papamatthaiou referred to the importance of the social contribution in these difficult times and emphasized the profound will of the Club to invite all the members and friends to continue to support the Propeller Club.

Τhe celebration for the 80 years of the Propeller Club Port of Piraeus was emotional. The President and the members of the BOG welcomed the former Presidents of the International Propeller Club Mr. Giorgos Besis, Mr. Savvas Kalafatidis, Mr. Giorgos Dalakouras, Mr. Argyris Skondras, Mr. Vlassis Karatzos, Mr. Nikos Tsavliris, Mr. Marios Kyriakou, and Mr. Anthony Stamos Faraklas, on stage, all together with the Ambassador of the U.S in Greece Mr. Geoffrey Pyatt and the Vice-Admiral of the US Coast Guard, Mr. Charles Ray, blowing the candles.

More than 900 guests from the shipping, business and political world attended this wonderful evening. The entertainment part of the event was taken over by the Philharmonic Coast Guard, and the leading guitarist Panagiotis Margaris with the singer Eleanna Finokalioti.