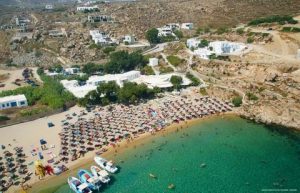 Mykonos is fully behind the Greek National Tourism Office’s drive to stimulate year-round tourism nationally. The Cycladic island is blessed with excellent climatic conditions, which means it welcomes visitors outside the cruise season of early April to October or the beginning of November.

Mykonos mayor Konstantinos Koukas was among scores of delegates from the Greek mainland and islands whose presence enabled the country to set up—as is now traditional – one of the largest national pavilions at the World Travel Market in London from November 7-9 2016. 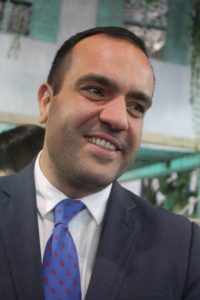 Mr Koukas, the youngest mayor in Greece, has played an important role in promoting his homeland’s tourist appeal.

The encouragement of 12 months-a-year tourism chimes well with one of the island’s marketing slogans: “Mykonos and yet more Mykonos! Take your time…”

The island greets each year more than 1m tourists, of whom 700,000 arrive as passengers on standard or fast ferries sailing the 150 km from Athens, departing from Piraeus or from Rafina, the second port of the Attica region, with several services each day during the main season. Mykonos is fortunate too to have its own airport, which opened in 1971 and is served by international airlines and charters during the summer season and by domestic airlines in winter.

Mykonos has been a prime beneficiary of the general rise in tourist interest in Greece, which has defied expectations that the economic woes of the country might put people off. The island has been undergoing a building boom with shops, restaurants and accommodation.

The Aegean resort is a mere 85 sq km and is often represented pictorially by its windmills, built by Venetians in the 16th century to take advantage of the strong northern winds. Many of the 10,000 residents are independent-minded and consider their island to be almost ‘a separate state’ from Greece.

In Greek mythology, the tranquil spot in the midst of the Cyclades was formed when Hercules buried the bodies of the giants he had killed under huge rocks.

One way of viewing windmills.

A one-time naval power, especially under the aristocratic heroine Mando Mavrogenous, who financed armed vessels to participate in the 1821 revolution against Ottoman domination, Mykonos was also a great entrepôt before the opening of the Corinth Canal.

One of the main attractions is a naval museum with models of ships, and charts, navigation equipment and amphorae. It is one of several cultural highlights including archaeological displays which provide a diversion for tourists from the dreamy beach and sailing life. The temples and other ancient sites of the nearby island of Delos afford an opportunity to combine both types of experience.

Since the 1960s, Mykonos has attracted a wide variety of holidaymakers, including royalty, businesspeople, Hollywood stars and hippies, but mostly these days middle class Europeans and other foreigners including Chinese. 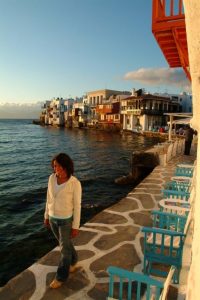 A stroll on Mykonos.

Mayor Koukas says that Chinese tourists take a special interest in the heritage of ancient civilisations visible on Mykonos and Delos, and they often travel in what for the Aegean are off-peak periods.

Now aged 34, Mr Koukas was elected mayor for a five-year term in May 2014. He has his own law firm on Mykonos. He studied at Thrace Law School and holds undergraduate degrees in law and in the civilisation and philosophy of Black Sea nations. He has a post-graduate degree in European and international studies.

The demise of General Aviation in Greece