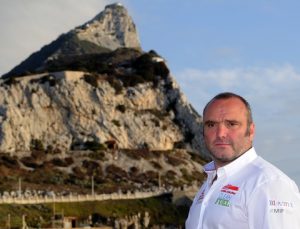 Plymouth’s Lee Spencer (47) is taking on his latest challenge and returning to the seas by stepping aboard the crew of Team Britannia, a new round-the-world powerboat record attempt.

The veteran of more than 24 years’ service in the Royal Marines will join the record attempt, which hopes to cut up to seven days off the current time of 60 days 23 hours 49 minutes, held by New Zealander Pete Bethune.

Team Britannia, led by British ocean racing legend Alan Priddy, will use a revolutionary semi-wave slicing boat that will carve through the waves, rather than surfing them. The super-efficient design, a variant of the “fast displacement hull” will reduce fuel consumption by up to 30 per cent and make the 24,000 mile trip smoother and faster.

The boat will be crewed by a team of 12, including up to five wounded, injured and sick servicemen and women (WIS) on each of the seven legs of the voyage who are being supported by Blesma (the Limbless Veterans Charity).

Mr Priddy commented: “I am delighted and proud to welcome Lee on board Team Britannia’s record attempt. Lee’s impressive military career will stand our team in good stead, contributing to the grit and determination of those on board. Lee already has an impressive ocean-going pedigree with his awe-inspiring row across the Atlantic – although we all hope he’ll be travelling a bit quicker this time around!”

Lee added: “This is certainly going to be a different challenge to my unsupported row across the Atlantic last year. I miss the camaraderie that comes from being part of a team, so I’m really looking forward to getting stuck in to this record attempt.”

He added: “I want to show that there is life beyond disability and that I am not defined by my disability – a message which I hope our mission will deliver to others right across the world.”

Lee, who lives in Tavistock near Plymouth, will be one of several wounded and injured (WIS) veterans in the crew.

He lost his right leg and injured his left in a freak accident. While stopping to help at the scene of an accident on the M3 motorway in January 2015, a second incident catapulted part of a car engine and gearbox into him.

Despite the significant injury and shock, Lee remained conscious for nearly half an hour after the accident, calmly instructing a good Samaritan how to make a tourniquet and stem the life threatening blodd lose.

Following the terrible injury he was medically discharged from the Royal Marines on 23rd September 2016 after more than 24 years’ service, serving in Northern Ireland, Iraq as well as three tours of Afghanistan.

Before his accident, Lee was a committed fundraiser for the Royal Marines Charity – of which he is now an ambassador and regular talks about the work of armed forces and the work of the service charities.

Just 11 months after losing his leg, Lee with three other veterans rowed “unsupported” across the Atlantic in the Talisker Whiskey Atlantic Challenge as part of Row2Recovery crew.

The boat is being built by the Aluminium Boatbuilding Company who are based near Portsmouth and will be fitting the latest navigation and communications equipment from the British marine industry.

It will be launched in late 2016 and will then commence sea trials. The record attempt will get underway early next year using the iconic Europa Point in Gibraltar as its timing mark.

To complete the record attempt the boat must pass through the Suez and Panama Canals, cross the Tropic of Cancer and the Equator and start and finish in the same place. The world record authorities, UIM (Union Internationale Motonautique) have approved Team Britannia’s proposed route, which will start in Gibraltar and call at Puerto Rico, Manzanillo, Honolulu, Guam, Singapore, Oman and Malta to take on fuel.

Mr Priddy concluded: “We are at a crucial and exciting point in the project. The boat is being built and we are putting together our team, both shore-based and those who will take part in this epic challenge. Getting the right team together is crucial if we are to smash the current record, so I am really pleased to have Lee on board – someone with the proven physical and mental resilience required to bring the world record back to Great Britain.”

The whole construction process is expected to take around nine months before it starts a programme of sea trials around the UK.

Team Britannia will launch their record bid in spring 2017 from Europa Point in Gibraltar.