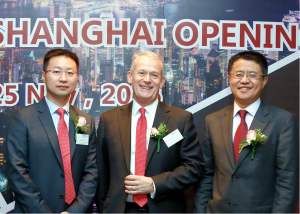 Over 100 prominent members of the Chinese shipping community celebrated the opening of North P&I Club’s new office in Shanghai at The House of Roosevelt on the west bank of Huangpu River last Friday (25 November 2016). North’s new office, located in the Pudong financial district just across the river, opened for business earlier in the week to support the Club’s ever-growing Asia Pacific membership.

Guests included Yang Yuntao, vice president and chief legal advisor of North member Sinotrans & CSC Holdings, which is the largest logistics services supplier in China and the country’s third biggest shipping company. He gave the main speech at the reception, in which he welcomed the Club to the city and wished it every success in China.

The new Shanghai office is headed by director Gary Chen, who was previously based in North’s Hong Kong office and has a shipping business degree from Shanghai Maritime University. He said in his welcome speech that he very much looked forward to building closer working relationships with the local shipping community. ‘North has more than a century of experience and we continue to take each step with prudence and precision. Our decision to open a Shanghai office – the Club’s fourth in the Asia Pacific after Hong Kong, Singapore and Tokyo – reflects the importance of the Asian and Chinese markets to us.’

Joint managing director Paul Jennings told the reception, ‘Our high quality Asia Pacific membership now accounts for 34% of our total global tonnage, equating to around 63 million GT of shipping. Total entries from Chinese owned and operated vessels currently stand at around 7 million GT and, with your support, we look forward to increasing this figure during the coming years.

‘In return we offer the protection of one of the most financially secure P&I clubs in the world, with an ‘A’ rating from Standard and Poors’, an unrivalled 25 year record of no unbudgeted additional calls and the highest levels of service, advice and support from our offices here and around the world. We look forward to working with you.’

North P&I Club is a leading global marine insurer providing P&I, FD&D, war risks and ancillary insurance to 133 million GT of owned tonnage. North acquired Sunderland Marine in February 2014 and formed the North Group. Through Sunderland Marine, North is also a leading insurer of fishing vessels, small craft and aquaculture risks. The Standard and Poor’s ‘A’ rated Club is based in Newcastle upon Tyne, UK with regional offices and subsidiaries in China, Greece, Hong Kong, Japan, Singapore and Sunderland Marine offices worldwide. North is a leading member of the International Group of P&I Clubs (IG), with 11.5% of the IG’s owned tonnage. The 13 IG clubs provide liability cover for approximately 90% of the world’s ocean-going tonnage and, as a member of the IG, North protects and promotes the interests of the international shipping industry. For further information visit: www.nepia.com.