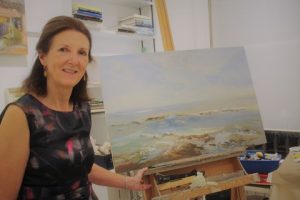 Lynda Minter in her studio.

Artist Lynda Minter’s instinctive feeling for the spirit of place is patent in her many marvellous evocations of Thames scenes in all their variety of settings and light.

In her pre-Christmas studio show, Lynda displayed 65 of her recent works on canvas, linen and board. They encompassed some dramatic, and some tranquil, riverscapes, and compositions that owed their content to her travels in Scotland and Cornwall.

The London resident’s exhilarating depictions are characterised by an impressionistic command of brushstrokes, sense of the colour juste, and by depth of view. She never ceases to be intrigued by the many facets of the longest river in England as it winds its way past many of the capital’s highlights, be they religious, financial or (mainly formerly) industrial. 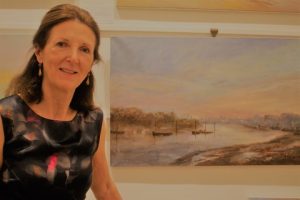 She always applies a stunning representation of the light to produce invigorating tableaux that effortlessly tell a story of the moment. One morning she is up early to make her way to Wandsworth where she produces a canvas that is mostly sky, impressive enough to any viewer, but which drew the gaze of one visitor additionally to the shore line, to comment: “Even that mud looks good.” Such is her skill with impasto.

On another day, Lynda was out at twilight to prepare a work entitled Hammersmith Bridge Towards Evening.  Another walk resulted in Putney Bridge, a Summer’s Evening. A foray to nearby Barnes led to the creation of Barn Elms boathouse on a blustery day. Barn Elms is the base for British Rowing, the governing body for indoor and outdoor rowing. Chelsea Wharfsees her capitalising on passing figures to sketch them as fuzzy shapes, as light glows on the river.

Fresh ways of seeing the riverscape have included The Thames from Canary Wharf and St Paul’s from Vertigo 42. Vertigo 42 is the name of the City’s highest champagne bar at the top of Tower 42, at 25 Old Broad Street.

On a smaller scale, namely 26cm by 30cm, are urban scenes including Sloane Square and Parson’s Green.

Cornwall is represented by (often gale-swept) Mousehole Harbour, and Scotland by the Isle of Skye where pinks and golds can be espied in the heavens above The Cuillin Hills, a summer’s evening.

It has been said before, but there is no doubt that even a brief acquaintance with Lynda Minter’s work recalls the masterpieces of JMW Turner. Her command of the element of light, indispensable in the kind of scenes that attract her, and her free brush strokes which nevertheless capture lyrical and evanescent moods bestow a magical atmosphere even to mundane subject matter. 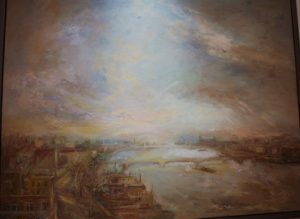 The Thames from Canary Wharf.

Lynda brings grace and deft handling of paint to any subject. She has always enjoyed alighting on new outdoor perspectives, and says that these days “I am painting more outside.”

Even the most accomplished artists say that it is not easy to paint water, but Lynda is one of the best at bringing to life on canvas the glistening river and the earth tones of the shorelines, complementing the subtleties above the horizon.

Financial Times art critic William Packer has said: “Lynda Minter is a natural painter, her handling of paint rich and free on the surface, and impressively sure in its scope and sweep.”

Her degree in sculpture at St Martins School of Art earlier in her career is said to have played a big part in inspiring the quality of texture and depth of her paintings.

Lynda continues to demonstrate an outstanding ability to adapt her technique – making oil and watercolour sketches to work up later in the studio – to her surroundings. A holiday is planned in 2017 in the Caribbean to soak up some beach sunshine, but she will have her box of watercolours by her side. Her admirers should be ready to be excited by new works that will invest elements of her discoveries in warmer climes.

LISCR’s Christmas drinks and dips at the Baltic