Welcome to the Kremlin – not the most famous citadel of that name, in Moscow – but a magnificent complex within another historic city, 797 km from the Russian capital.

The Kremlin of the riverport city of Kazan is one of five such Unesco heritage sites in Russia, and tourism representatives from the region manned a colourful stand at the 2016 World Travel Market in London. 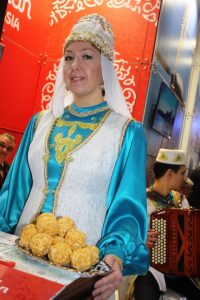 Occupying a picturesque site on the left bank of the Volga, Kazan is the capital of the Republic of Tatarstan and is one of the largest industrial, financial, trade and tourist centres of Russia. One of its claims to fame, civic leaders say, is that Russians and Tatars, the two biggest ethnic groups in the federation, live peacefully together.

The Kazan Kremlin is far from unknown: in 2015 it was visited by hundreds of thousands of tourists.

On the orders of Ivan the Terrible who ruthlessly took the city in 1552 the fortress was built on the ruins of an earlier castle. The Kazan Kremlin incorporates many buildings, the oldest of which is the Annunciation Cathedral (1554-62) in pale sandstone.

As in Pisa, there is a leaning tower: this one is known as the Leaning Tower of Princess Suumbike. The spire deviates from the vertical by almost 2 m in a north-easterly direction. 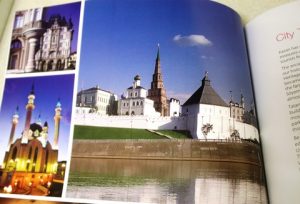 Within the Kazan Kremlin zone are the president’s residence, government buildings, museums and exhibition halls and even a park.

Elsewhere in Kazan, the biggest mosque in Europe, the Qolşärif Mosque, was opened in June 2005. It reconstitutes the Al-Kabir mosque of the Khanate of Kazan. The khanate was a Bulgarian-Tatar Turkic state on the territory of Volga Bulgaria between 1438 and 1552.

Kazan has a rich cultural life, with 20 state and five municipal museums and numerous private museums. The Soviet Lifestyle Museum introduces the visitor to “the not so remote, yet already forgotten 1970s and 1980s.” There are seven theatres and many festivals including the Feodor Chaliapin Festival, Rudolf Nureyev International festival of Classical Ballet, Festival of Muslim Cinema, and a festival of Tatar culture and folklore.

The former Imperial Kazan University, under its current name of the Kazan Federal University, has a museum, too. Among the university’s students were Leo Tolstoy and Vladimir Lenin.

With more than 1m residents, Kazan is the eighth most populous city in Russia. In 2009, the Russian Patent Office granted the metropolis the right to call itself the Third Capital of Russia. In the same year, it was chosen as the Sports  Capital of Russia. The city hosted the 2013 Summer Universiade, 2014 World Fencing Championships, the 2015 World Aquatics Championships, and is one of the host cities for the 2017 FIFA Confederations Cup and the 2018 FIFA World Cup. Visitors are offered a three-hour Football Kazan Tour, which celebrates local team FC Rubin Kazan and its ultra-modern stadium. 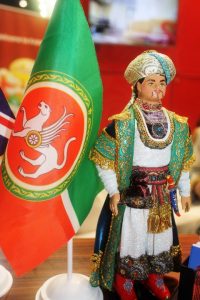 Tourism in Tatarstan is said to be growing by between 10% and 12% a year, and the Riviera aquapark is among the big draws.

Organisations represented at the Kazan stand at the World Travel Market included Hospitality Travel (the representative company in the UK of the State Committee on Tourism of the Republic of Tatarstan) and Travel Agency Kazan.

The early history of Kazan is uncertain, but it may have been on the Volga trade route between Scandinavia and Baghdad.

South of Kazan, the site of the ancient city of Bolgar, a Unesco heritage site, lies on the shores of the Volga. It contains evidence of an early settlement of the civilisation of Volga-Bolgars, which existed between the 7th and 15th centuries AD, and was the first capital of the Golden Horde in the 13th century. Unesco says: “The historical and archaeological complex of Bolgar is a symbolic reminder of the acceptance of Islam by the Volga-Bolgars in 922 AD and, to Tatar Muslims, remains sacred and a pilgrimage destination.”

Thanks to Peter the Great, Kazan’s star rose as a centre of shipbuilding for the Caspian fleet. The port, the largest on the Volga, is known as the Port of Five Seas. The website www.russia-channel.com says that besides commercial shipping traffic, the port deals with many passenger liners. During the revolt in 1774, it was mostly destroyed, but rebuilt during the reign of Catherine the Great, says the website.

In May 2013, a shipbuilding training centre was opened at Kazan State Technical University. Its aim is to educate qualified engineers and technical employees, and there is a ship testing basin.

Having determined that 1005 was year of the city’s official establishment, Kazan celebrated its millennium in 2005. One of the most important millennium events was the inauguration of the Kazan metro system. The metro is “the first, and so far, the only metro launched in new Russia,” say city leaders.  The stations are “masterpieces” and one is decorated with white and green marble, with pictures on the walls of Roman mosaic showing heroes and historic themes, and a portrait of the Tatar writer Gabdulla Tukay.

The city has 115 ethnic groups, and Tatar – a Turkic language – and Russian are the official languages.