Ancient Thouria wins the minds and hearts in London 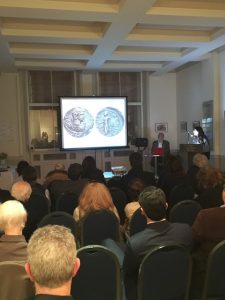 The Skouras’ delivering their illustrated lecture

Earlier on tonight, being also one of the coldest so far this winter in London, a very “hot” and  besides cultural event took place at a full house in the Friends Room of the Hellenic Centre! Anna Menis was there with her camera:

Dr George Skouras and his daughter Dr Theodora Skoura* delivered an illustrated lecture in Greek and English under the theme “Ancient Thouria – Dea Syria Temple”. It is the second such event that allaboutshipping is proud to upload following the last one on 12 June 2015.

The speakers presented the Ancient Thouria coins circulation series, focusing on topics of ancient sociology and the presence of the only found temple of the Levante Goddess in the region. They also related the historical and sociological findings to reports of residents of the area as to the socioeconomic culture connections with Europe and Asia.

At the end of the presentation, Dr George Skouras and Dr Theodora Skoura were more than willing to speak with the audience and hosts who offered wine and excellent dips.

All in all a pleasant evening full of extra knowledge for the faithful attendees, proving the very early relations of the residents of the area with the international trade, printed in their coins. Statement of the day: “Coins is the picture of the society”!

The event went beyond the expectations of the Hellenic Centre’s director Mrs. Agatha Kalisperas who organised same and also introduced the speakers*

It was attended by the   crème de la crème of the Greek and Cypriot Societies living in London including a few from the London’s Greek Shipping Fraternity who enjoyed the lecture and found it special, given the importance of coins in commence and trade! . 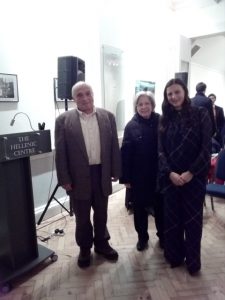 We are looking forward to more such events which remind us the importance of trade and international communications as an origin characteristics of the Greeks.

Dr. George Skoura is proud to be Vice President of the Society for the Study of Hellenic History in Greece and a member of the Cyprus Numismatic society. Dr. Skoura’s wrote a book about ancient Thouria region that was nominated for award by the Academy of Athens. George Skouras is a physicist ex-president of the Greek physics society with a PhD in Sociology and educational analyst director of education who also taught physics at the University of the Aegean after an international career both in Greece and in Germany in education devoted his time in collecting Greek coins from abroad and their repatriation of these coins to Greece. At the same time, a lover of his Messinian roots, he examined biodiversity of the environment through reduction of entropy and studied local  history through coins of Ancient Thouria.

Market losses widen; geopolitics a liability for all