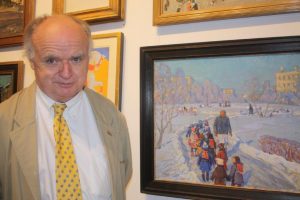 Paintings from Soviet Russia 1950-80 on show at Highgate, London

Red hammer-and-sickle banners framed the entrance to the hall of a distinguished institution in the smart London suburb of Highgate, for the opening of an outstanding exhibition: Paintings from Soviet Russia 1950-80.

Guests marvelled at the range and power of more than 50 artworks from the 30-year period, to join the specialised but growing international audience which has come to love the genre in the last few years. The period flags aloft plus proffered tumblers of vodka was a symbolic bonus. 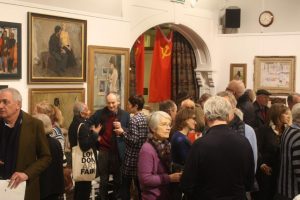 Dealer John Barkes has ploughed a furrow that has often been his own for more than two decades, in gathering for sale magnificent examples of the output of members of the Artists’ Unions of St Petersburg and of Kiev.

Dr Barkes has travelled many times to Russia and Ukraine to get to know surviving artists, and the families and executors of those who have passed away. He has brought back to the UK works some of which were stored in cupboards for years without their authors’ expectation that they would go on public display again. Under the previous political system, there was little in the way of an art market. 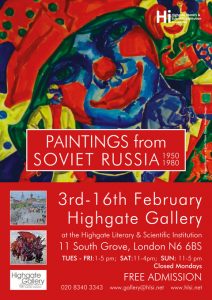 The new exhibition, at Highgate Literary and Scientific Institution, is in the centenary year of the Russian revolution. The wealthy suburb of Highgate has connections with Communist activism in that Karl Marx is buried at the illustrious cemetery, and Vladimir Ilyich Lenin is said to have led a delegation of Bolsheviks to honour the grave when he was in London in 1903.

As to the Highgate institution, it represents a workers’ education tradition: it was established in 1839 by a young civil servant as a society to help people understand new developments in industry and science. Since 1994 its gallery has welcomed new and established practitioners of the graphic arts, and community events. On the walls of the gallery for this occasion were “some of my best [collected] paintings,” said Dr Barkes.

Those paintings drew much admiration from the private view evening guests, who travelled from many parts of London. 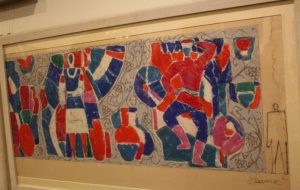 Part of design by Kazmin for Sochi State Circus Pavilion.

It was a wonderful opportunity to become familiar with the names of men and women who were members of the once privileged Soviet artists’ unions. Most of the artists trained intensively for years at the incomparable Repin Academy of Fine Arts in Leningrad, now St Petersburg. Some works were produced in the oft-derided Socialist Realist – art in the service of the workers’ and peasants’ state – but these days there is greater appreciation of the qualities that shine through such compositions. 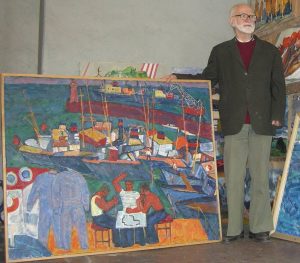 Other studies in the era show a truly charming approach, especially in portraits of daily life and family. In pictures of working men and women, the sympathy for the subjects carefully falls short of over-glorifying them.

These artistic geniuses were born just before or after the burst of creativity in early revolutionary years had been stifled by Stalin and his henchmen, and in their later years the reins were loosened somewhat. They could produce some great and touching work while remaining in the sanctioned framework.

The most stunning feature of the Highgate exhibition is a section devoted to panels of designs for the state circus pavilion at Sochi in 1969. These were executed by the brilliant Evgeni Kazmin in gouache and watercolour. What was on show at Highgate referred to just half of a scheme of four massive mosaics around the pavilion. 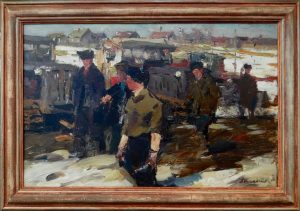 Tractor Men. Oil on board. By Oleg Lomakin.

In addition to monumental works, Kazmin clearly enjoyed painting and sketching by the shore, as witness his Divers Playing Dominoes at Sochi Harbour, Beached Fishing Boats, and Sorting the Catch.

Born in 1936, he studied at Rostov-on-Don Art College, and was a member of Sochi Artists’ Union until 1976, when he moved to Leningrad.

In common with Kazmin, some of the artists have little published biography, but an exception is Oleg Lomakin, whose 1957 oil on board Tractor Men is on show at Highgate. 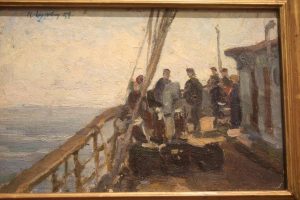 On the Volga Ferry, summer, 1951. Oil on canvas by Iosif Gurvich

He had a dramatic, and ultimately celebrated life. He was born in 1924 in Krasny Kholm in the Tver region. After the death of his father the family moved first to Bezhetsk, then Leningrad where he studied at the High School for Arts until the siege of the city meant evacuations to Samarkand in February 1942.  He was drafted that year into the Red Army as an anti-aircraft gunner, was seriously injured in 1943, and awarded the First Class Patriotic War Order and Medal For Bravery.  A year later, he returned to his art school studies, followed by enrolment into the Repin academy.

His 1950s paintings on state and patriotic themes were much garlanded, and in the following decades he turned his attention to farm, village and industrial life.

From 1952 he was a member of the Leningrad, later St Petersburg Union of Artists and in 1981 was awarded the title of Honoured Artist of the Russian Federation. He exhibited in Finland, Germany, France, Spain and Japan, and he has works in the State Russian Museum, State Tretyakov Gallery, and private collections in several countries. He died in St Petersburg in 2010.

On a small scale is the evocative work On the Volga Ferry by Iosif Gurvich (1907-1992). A master of many genres, he was born in Kishenev and studied in Odessa, moving to Moscow in 1932, eventually teaching at an art school for children.