Top Posts
Don’t take chances where your health is concerned…
How Greek shipping can cut costs and improve...
GLOBAL & REGIONAL DAILY (Thursday 13 May, 2021)
RMT calls for action to protect seafarers’ mental...
Poseidonion Grand Hotel welcomes you back on May...
Large Diameter Drilling to partner with DEME Offshore...
Cyprus Ship Management Round Table Webinar and Debate
Lady Moura up for sale… plus more
Will the dollar decline? The changing landscape of...
TSUNEISHI SHIPBUILDING collects actual operation data by IoS-OP
Deltamarin is proud to be a part of...
Home NewsConferences, Seminars, Forums Capital Link Cyprus Shipping Forum: Some reflections on the state of World Shipping Today
Conferences, Seminars, ForumsEventsNews 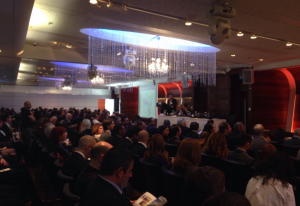 As always a full house

The first Shipping Forum organised by Capital Link in Cyprus earlier on today, 2017 at the state-of-the art Columbia Plaza of Columbia Ship management in the city of Limassol, was evidently a great success. A full day program involved sessions where major shipping stakeholders, including ship owners, ship management companies, financial institutions, classification societies, shipyards, and Government representatives from the Republic of Cyprus shared their views on the current state and prospects of world shipping.

Participation to the Forum was high and the full assembly until the Forum’s very end could be seen as proxy of the high interest on the issues raised. Sessions were centered on the state of the global shipping markets, the opportunities, developments and challenges faced in ship management (including technical matters, crew management and development, cybersecurity issues, regulatory developments on the prevention of corruption, trends in insurance), as well as geopolitics, shipping finance, and an overview of the aforementioned issues approached from the ship owners’ perspective.

The key message of the Forum was that world shipping still finds itself swamped at the deep end of a recessionary trough to which it has fallen since as back as 2008. The imposing question of speakers and audience was: Is that it? Has world shipping reached the nadir of the sector’s growth continuum now only expecting a slow but hopeful upturn? Nobody can say with certainty, and as constellated in a single statement by the chairman of the conference George A. Tsavliris, President of the Tsavliris Salvage Group: “What is certain about shipping is its uncertainty”.

Particularly the sessions on trends of world shipping underpinned the pro-cyclical nature of the sector and, certainly, its dependency on the growth of the commodity and oil markets. Notably, the length of recessionary periods in world shipping has historically been long enough to cause enormous changes not only in the transportation capacity of the sector, but also to its key players and rules of the arena. A related and numerously raised factor by many speakers and certainly the ship-owners who constituted the summing up panel of the Forum, i.e. Spyros Kapralos,  Andreas Hajiyiannis,  Polys Hajioannou, and Aristeides Pittas  was the over-capacity of tonnage that keeps freights low. While they, for example, argued that we can expect a noticeable increase in the freight rates of dry cargo vessels over the next year or so, they all concurred that we are no where close to returning to the glorious era of 2007-2008. Greediness they argued is a key behavioral parameter that pushes freight rates down again, as soon as ship-owners start placing more orders for new-buildings, when tempted from signs of market recovery. Self-restraint they argued sums up the approach that ship-owners should adopt in order to help the sector revive. Many ship-owning companies found themselves under very tough operational circumstances last year as a result of the immense drop in freight rates, which resulted in them being unable to even cover their operational expenses.

Not independent from the above, a parameter, which has caused increased suffocation in the shipping market, has been the unprecedented withdrawal of the banking sector (there are about only 10 banks today, with a dedicated shipping finance venture, globally; this number was more than double prior to the recession), private equity funds and other institutional investors from world shipping. An imposing need for short-term return on their investment has driven debt and equity providers away from the shipping market, something, which has caused many ship-owning companies to embark on high-scrutiny housekeeping projects on operating costs and cash outflow negotiations with their debt finance providers in an attempt to ‘lengthen the runway’ for shipping firms.

Trust and long-term cooperation between a ship-owning firm and its capital providers to enable a mutually pursued way of overcoming financing and debt-repayment plus interest difficulties was a recurring theme that emerged from the finance and capital markets session moderated by Mr Andreas Christofides, member of the BoD of Hellenic Bank and executive director of Granfield Wealth Management; finance providers who are actively involved e.g. through joint venture projects in ship-owning are more willing to support their shipping partners when they have known them for long enough (hence the formation of joint ventures with them). 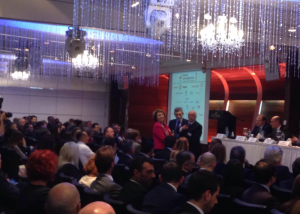 The increased tension between the goals, needs and expectations between ship-owners and capital providers, was summarized by an appealing intervention from Capt. Panayiotis N. Tsakos, President of the Tsakos Group. He argued that “they [i.e. capital providers] need to understand us; need to understand our unwritten rules and codes of conduct; they need to understand the venture they are entering to and be patient”. Capt. Tsakos’s statement explicit enough for its intended purpose, highlighted that a new ‘social contract’ needs to be established between ship-owning firms and their financiers if we want to stimulate an upturn in the arena of world shipping.

BDI@707; reversing the tide? Geopolitics more than turbulent though!

Wärtsilä joins Seabin Project in the battle against ocean plastics