BDI@707; reversing the tide? Geopolitics more than turbulent though!

Now this is …headlines: the BDI is up, yes up, plus FIVE POINTS and the 9th of the moth per the Greek saying is reversed and …valid! Let us hope things will improve, even at the last moment given the awful geopolitical tragedies we live and we are about, unfortunately, to witness. John Faraclas’ daily recap:

With minimal, but hopefully positive gains, the Dry Markets sends the message that companies might survive and many think the bad days are behind us; we are optimistic and pragmatic too, as, unless we see another 2,000 (two thousand) plus points, DON’T count your eggs before they are hatched!

The BDI with these five points at 707 makes waves…

The Capers after this unprecedented fall gained three points and now the BCI 2014 stands at 728 points.

The Panamaxes, the first of the dries to …uplift the moral gained six further points and the BPI reads 940!

Mixed feelings fro the Wets; the last published BDTI (Dirties) and BCTI (Cleans) stood at 842 – minus four and 581 – plus one respectively…

The WTI at US$ 52.90 as these lines are written (16:00 GMT) is worrying as we need to see the maximum being US$ 50 (fifty) flat to encourage the poor masses. As for the companies results, the where does their CSR stands, eh!

In the Geopolitical front the MIGRANTS are still on top of all news today all over Planet Ocean – no change, a worsening situ prevails.

GREXIT looms in the background…

Was it a technical accident or what in France earlier this morning at Flamanville’s nuclear plant?? Let’s hope it was just a technical malfunction! 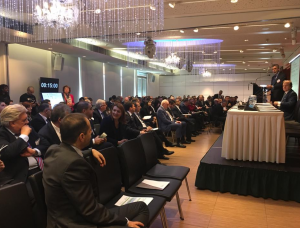 A full house: from the welcome address by Nicolas Bornozis and George A. Tsavliris

The Capital Link’s event today in Cyprus was more than a success given the theme, the timing and the importance for the region. A full house at Columbia Plaza in Limassol with the Bornozis team in full force and delegates from all over the world; just check the list and see the supportive element there! We will shortly have more news and we will report in full from the event but our man in Habana as we say sent us the first news from the interesting Marine Insurance panel:

There was an interesting exchange of views on the panel of insurance experts which had been assembled by Capital Link to address the subject of optimizing insurance and reinsurance supply for the benefit of shipowners and operators. 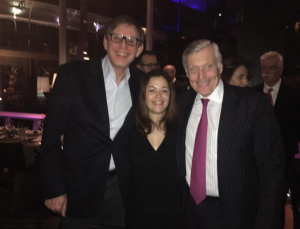 The panel was moderated by Mr. Mark O’Neil, the recently appointed president of Columbia Shipmanagement. Mr.O’Neil asked a series of searching questions of Mr. Stephen Cooper of Fourth Insurance Office, Inc., visiting from the United States, Mr. Costas Th. Joannides of Marsh Brokers, Ltd., Limassol, Mr. Ole Wikborg of the Norwegian Hull Club, and Mr. Joe Hughes, CEO of the managers of the American Club, also visiting from the US.

Given the very broad range of subject-matter, and regional, expertise represented on the panel, it proved possible to gain some interesting insights into, variously, the value of insurance captives as a means of optimizing insurance placements for larger operators, the benefits to be derived from the careful review of even comparatively standard forms of insurance, and the pitfalls to be avoided when navigating the often difficult landscape of sanctions.

Everyone agreed that the insurance markets remained in a state of flux, prospects for the future being colored to a large degree by continuing macroeconomic and geopolitical uncertainties, nor assisted by recent developments on both sides of the Atlantic. 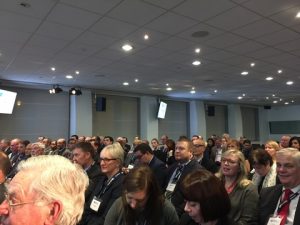 In London a great day for the Island Nation  with the launching of earlier on this evening of the Seafarers Awareness Week 2017  – 24 to 30 June, at the mezzanine amphitheatre conference centre of INMARSAT. A full house listen to great speakers and we will revert soon with a full account on the event. The success of the shipping industry rests with the much needed human resources and the Seafarers issue is of paramount importance. The event coincides also with the Seafarers UK Centenary this year and a special celebration dinner will take place on the 28th of March at the Guildhall in the heart of the Square Mile. 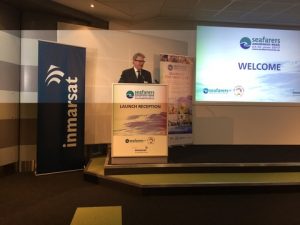 Commodore Barry Bryant at the podium delivering his speech

More news on the geopolitical front and the Capital Link Cyprus Shipping Forum later  on. Until then be on guard for every eventuality.