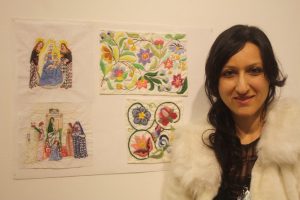 An artist who during her short career demonstrated outstanding ability in portraying in embroidery and other graphic techniques the paradoxes of civil and religious society has been celebrated in a memorial exhibition in London.

The exhibition Fauzia Akbar: A Life Loving Art casts a glorious light on the work and sketchbooks of Fauzia Akbar, a Camberwell College of Arts BA (Hons) Drawing student who passed away after a short illness at the age of 45 in June 2016. 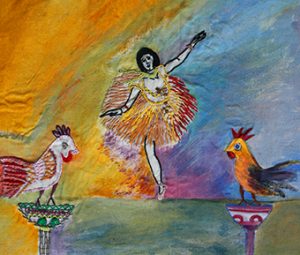 The college says that Fauzia’s passing was “a tragic loss to all who knew her” and displaying her work “provides an opportunity to celebrate her prolific talents that demonstrate her love of art and enthusiasm for making.”

Visitors to the exhibition are shown “an alternative mythic world” which she created of goddesses and monsters, see her re-examination of religious iconography, and lack of inhibition in her acute social observation. They will be enticed to appreciate what are described as her “engaging and enigmatic ways.”

The exhibition – a joyous occasion despite the deeply-regretted absence of its bounteous inspirer – runs at Camberwell Space Projects at Camberwell College of Arts, which is part of University of the Arts London, from February17-24 2017, with visits by appointment. 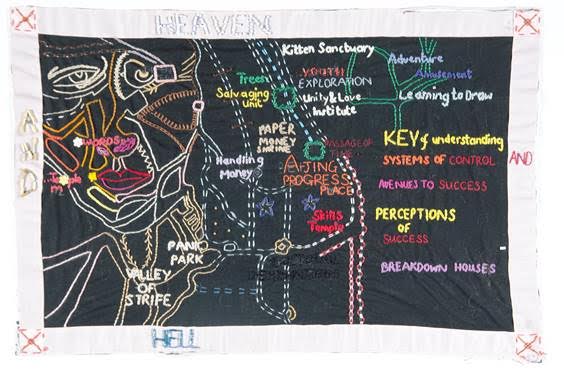 Although Fauzia Akbar when a teenager started a fine arts foundation course at Saint Martins (the renowned London academy now known as Central Saint Martins) she left just before finishing it, and returned to the field much later at Camberwell as a mature student. She had rekindled her dormant practical interest after joining an Asian Women’s Centre sewing class run by her mother. She thus embraced and carried forward in new directions the strong tradition of embroidery in the Akbar family.

Versatility became one of her strongpoints. In her artistic arsenal are drawing, painting, lino-print, graphite and embroidery. “Hers was an inventive approach to art-making that yielded unique and captivating results,” says the Camberwell Space Projects introduction. 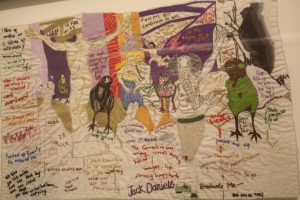 Her compositions on cloth link eastern and western allegories and symbolism, with Biblical Christian imagery adjacent to south Asian Bharatanatyam scenes and figures.

Under the heading Threads of Inspiration Fauzia’s sister Arifa Akbar has written for the publication that complements the exhibition a vivid and engrossing account of the artist’s story. 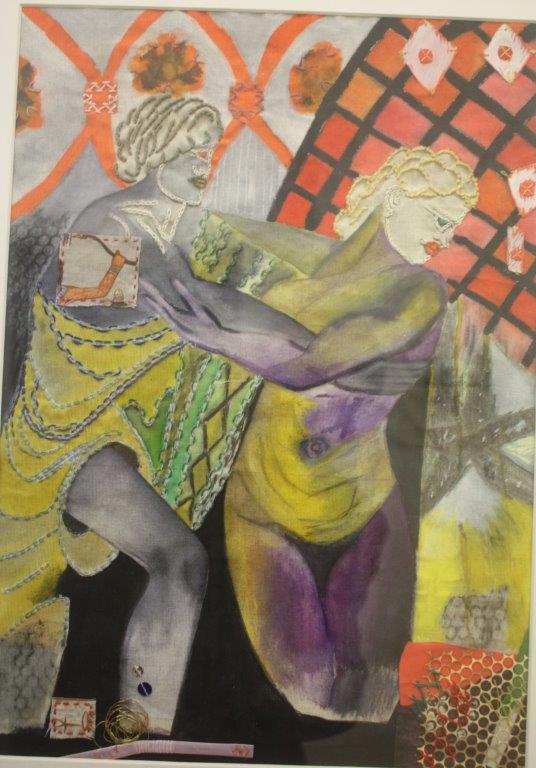 Arifa Akbar is one of London’s most thoughtful, eloquent and elegant writers on the arts and other topics. She contributes to the Financial Times, Sky News, the Guardian and feminist-oriented site www.the-pool.com. She is deputy editor of Wasafiri, a magazine of international literature which since the early 1980s has covered Britain’s diverse cultural heritage, Wasafiri is Kiswahili for ‘travellers.’ Arifa until recently wrote for and co-ordinated literary coverage for the Independent, when she drew attention to the wealth of new writing published, and often undervalued, around the globe.

In her teens, Arifa came to be in awe of her sister’s vivid imagination and maturity, which was highlighted upon Fauzia’s return from a visit to Rome in 1990 during which she had fallen under the spell of the works of Michelangelo, Titian, da Vinci and Raphael.

Later when Fauzia took up needlework, says Arifa, “the urge to pursue art rose up again by stealth in these embroidery classes.”

Many of Fauzia’s sketches, paintings and embroideries were filled with Christian iconography, which Arifa said might be puzzling “in a person who hated conventional orthodoxies.” The conundrum was resolved for Arifa when she saw a sketchbook with religious images on one page and representations of her family on the other. “It seemed as if the sketches were working out the contrasts and parallels between the Biblical family and her own. Family, and origins, had been one of Fauzia’s biggest preoccupations – how we end up as we are – and here it was, transposed in these parallel images.” 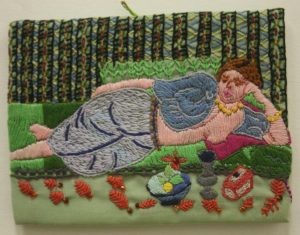 Arifa wrote of her sister’s attachment to Camberwell: “She loved being at the college and she felt a rush of inspiration in her time there. Fauzia would be beside herself with surprise and happiness if she knew her work was being celebrated in this exhibition.”

In a foreword to the exhibition brochure, Kelly Chorpening, who as course director of BA (Hons) Drawing at Camberwell was tutor to Fauzia,, wrote that one of her greatest strengths was her use of stitch. “She used sewing to subvert a number of artistic conventions.” 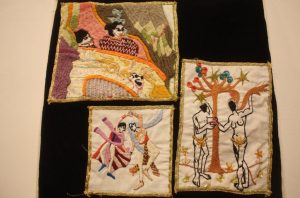 Fauzia was a passionate explorer of religious and mythological themes in western art, said Ms Chorpening. She was always inventing ways to integrate different techniques and play with meaning. An oil painting might be adorned with beads and stitch, or an ornamental pattern might evolve into figurative narrative. “One can recognise the influence of Renaissance artists Sandro Botticelli and Lucas Cranach, as well as contemporary ones such as Grayson Perry and Paula Rego.” These inspirations were consolidated in her personal narratives “in engaging and enigmatic ways.” 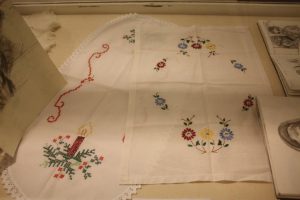 Dressing table doily by Bella Akbar from the 1980s.

Ms Chorpening said: “Though we are still so sad and shocked by her passing, this exhibition allows us to take a moment to admire her dedication and talent.  Let us all take inspiration from her life’s work.”

Displays include examples of embroidery made by members of the Akbar family, including a 1938 piece by her grandmother from pre-partition Lahore, a dressing table doily from the 1980s by Bella Akbar, her mother, and a table cloth from 1968 made by her mother in 1968 under her maiden name Bella Rasheed-Akhtar before moving to England from Pakistan. 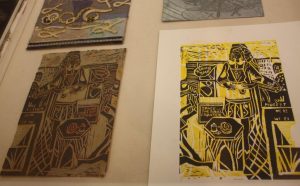 Accompanying the show are 17 pieces by Camberwell staff and students, who, the college said, “will take inspiration from art history to create new works, a fitting tribute to Fauzia Akbar’s life and work.”

All those who visit this stunning exhibition and read the moving tributes by Arifa Akbar and Kelly Chorpening will become painfully aware that a sensitive and perceptive artist was lost far too early while she was fashioning compelling contributions to the fields of endeavour for which she cared passionately. 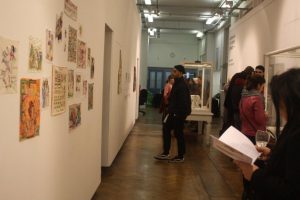 View of the private view.

Fauzia Akbar: A Life Loving Art, is at Camberwell Space Projects, Camberwell College of Art, Wilson Road, London SE5 until February 24 2917, open to the public by appointment on weekdays.

The BDI’s “recovery”, has a long way to go… so does Geopolitics