America after the Fall… 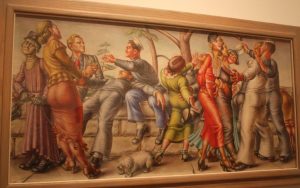 America after the Fall: Painting in the 1930s

It is tempting to guess that the motive for the Royal Academy’s new exhibition, America after the Fall, with its Depression-era depictions, is the domestic political and industrial landscape highlighted by the new US administration. Wrong. In fact, the genesis for bringing together such a collection of 1930s masterworks was the 2008 financial crisis. Intense planning got underway four years later, and the show has been another four years in the making and organising, a typical span for a major endeavour of this kind. 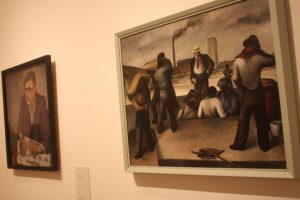 In Dust Bowl America, people were looking anxiously over at Europe to witness disturbing and brutal political trends – today the anxious gazes of many Europeans are westwards over the pond.

Through its wonderful selection of exhibits, the London institution underlines with devastating clarity that the 1930s saw “America at the crossroads.” Unemployment soared to 25% before falling back mid-decade. Banks and stocks were wiped out, international trade plunged by half, commodity prices crumbled, and drought and winds turned the Great Plains to powder. At the same time, art was being democratised in terms of the lowly origins of many of its new practitioners, and of its subject matter. 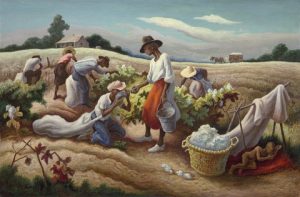 While Europe continued to experiment with abstract, geometric and other avant-garde forms, the US saw a renewal of figurative art, often laden with symbolism.

Such is the case with Roustabouts of 1934 by Joe Jones. In this oil on canvas, loaned by Worcester Art Museum, Massachusetts (gift of Aldus C Higgins), the stark scene is of African-American workers unloading a barge on the riverfront of St Louis, Missouri. A white overseer, hand in pocket, faces front while the individual stevedores are in shadow, glumly unhappy with their lot and perhaps plotting to rebel.

Born in 1909 in St Louis, Jones left school at 14. He was a self-taught artist and strong supporter of the Communist Party, upsetting the establishment by teaching painting to jobless black workers. He spent his later career in New York, softening his themes as anti-Communist hysteria bore down on intellectuals, and died in 1963. 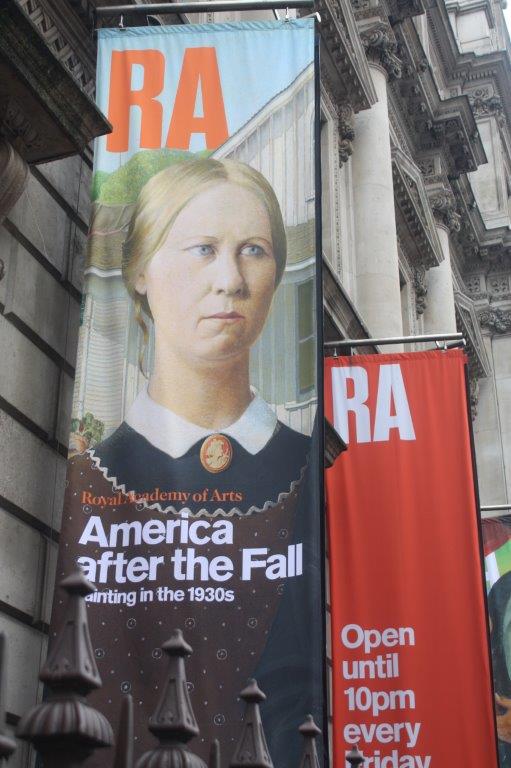 Joe Jones likened another of his paintings, with the ironic title American Justice (1933) to a Renaissance crucifixion scene, and it is a harrowing one. A black woman, her white dress torn away, has been cast on the ground, as eight members of the Ku Klux Klan are in mid-rampage, burning down a house and ready to hang negro victims. Jones is said to have decided on the theme after seeing photos in a newspaper of a lynching in Indiana.

Jones and some of the other artists in the Royal Academy show have been undeservedly sidelined in mainstream America, despite many of them having long careers and winning praise from contemporary critics.

Complacency was shocked by another of the pictures brought to London, despite a seemingly patriotic title of The Fleet’s In! This is a 1934 painting in tempera on canvas by Paul Cadmus (1904-99) and is from the Collection of the US Navy. During one of many projects under art programmes set up by Roosevelt’s New Deal, Manhattan-born Cadmus was commissioned by the Navy to paint a scene of sailors on shore leave.

American Gothic, 1930 Oil on beaver board. By Grant Wood. The Art Institute of Chicago.

Retired Admiral Hugh Rodman led the protest saying: “It represents a most disgraceful, sordid, disreputable, drunken brawl” and was “an insult to the enlisted men of the US Navy.” Swiftly the Secretary of the Navy, Claude A Swanson, demanded the painting be removed from view. It was kept away from the public gaze – for half a century – and now hangs in the US Naval History and Heritage Command in Washington. Cadmus insisted at the time: “I had no intention of offending the Navy. Sailors are no worse than anybody else. In my picture, I merely commented on them – I didn’t criticise.” Cadmus told the New York Times: “Admiral Rodman and the Navy brass who are so angry must govern an Alice in Wonderland navy dream world; they should take a stroll along the drive at night when the fleet’s in port.”

America after the Fall brings to Europe for the first time some of the most iconic works by 32 artists from 1929, when Wall Street crashed, to the 1940s, when the US entered World War II. The Fall was a term given to the political and economic turmoil following the Wall Street debacle. America’s rural roots were withering. Cities were growing to absorb destitute people driven by hunger from the wasted farmlands. Alongside them was an influx of migrants from overseas looking for prosperity, and people fleeting from fascism in Germany and Italy, and repression in the Soviet Union.

Many artists examine how the economic crisis directly affects working people, in a style known as Social Realism (not to be confused with the Socialist Realism imposed by Stalin on Soviet artists from 1932). In its rurally-oriented version, these people are known as Regionalists, for their realistic scenes of countryside and small-town America mainly in the Midwest and South. This was not an organised movement, but rather a fascination with illustration.

Amid despair, some looked to the future with hope, through either a revived capitalism or a swing to socialism. It was in 1931 that the term American Dream was dreamed up by James Truslow Adams his treatise The Epic of America. This was less outright materialism than the assertion that every American no matter how humble had the opportunity to fulfil their capabilities. 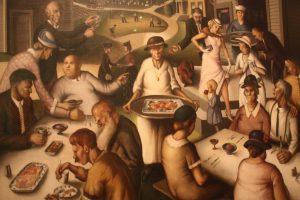 The poster picture of the exhibition, American Gothic, painted in 1930 by Iowa native Grant Wood (1891-1942), is probably the country’s most famous painting. It is one that people deliberately go to Chicago to see, and ask around all the city’s art galleries where it is, to be informed that normally it hangs in The Art Institute of Chicago. This is the first time it has been transported across the Atlantic, having arrived in Paris at the Musée de l’Orangerie in autumn before being transferred to the RA.

Judith Barter of the Chicago institute, who has curated the Royal Academy exhibition along with home curator Adrian Locke, suspects it is so popular because it resonates with people who had relatives that experienced the tough agrarian life depicted.

In American Gothic, we see a simply-dressed couple – probably father and daughter – with looks as enigmatic as the Mona Lisa, in a far different context. They are clearly determined to wrest their living from the land and defend their clapboard homestead from the ravages of man, money and nature. They cling on to the simple life they know which might be described as previous-century gothic, while the cities are going crazy for modernism and, as they might see it, debauchery. 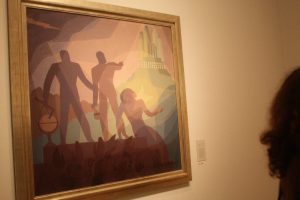 In Erosion No 2 – Mother Earth Laid Bare (1936), Alexandre Hogue presented an allegory of the terrible droughts in which rolling arid farmland takes on the form of the body of a naked woman.

Another key work by Grant Wood is Daughters of Revolution (1932) in which three conservative, elderly women peer at the viewer, in front of a representation of the historical painting Washington Crossing the Delaware by Emanuel Leutze. The contrast is in the bold and radical era of Washington and the Anglo-Saxon racial superiority embodied in and claimed by the women.

Looking in an opposite direction, Aaron Douglas in Aspiration (1936) depicts the bedrock hope or illusion of labour earning salvation. He has two men and a woman on a dais hailing the glory of a distant factory and skyscrapers as dawn begins to glow. They hold instruments of work that will build a better future. Chained arms outstretched at the bottom of the painting are a reference to the slave forebears whose drudgery was the foundation of the nation.

Douglas (1899-1979), who was a member of what is known as the Harlem Renaissance, has been called “the father of African-American art.” With its celebration of African-American music, art, literature and history, the Harlem Renaissance led to compositions such as William H Johnson’s Street Life, Harlem (1939) and Arthur Dove’s Swing Music (Louis Armstrong) (1938), the latter hailing a return of abstraction. Pop art gets a first look-in with Wrigley’s (1937), a chewing-gum pack plumb in the middle of a painting by Charles Green Shaw.

Another compelling tableau is Church Supper (1939), an oil on canvas by Paul Sample (1896-1974). This comes from the Michele and Donald D’Amour Museum of Fine Arts, Springfield, Massachusetts. Sample was a boxing champion who was laid low by tuberculosis, and took up painting as he recovered, focusing on the New England landscape. In the busy picture, with its all-encompassing perspective, there is a reminder of the techniques of the Flemish painter Pieter Brueghel the Elder. As the staid and poor-looking churchgoers tuck into a filling but basic supper, some surreptitiously glance at a well-dressed couple step out, she “showing a leg” which was a trope of movies of the era. 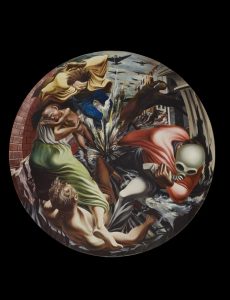 Thomas Hart Benton (1889-1975) painted Cotton Pickers, Georgia from studies he made when travelling through Arkansas, Mississippi, Alabama, and Georgia in 1926. It is part of his protest against sharecropping, in which landowners rented land to poor farmers in return for a share of the crop. Benton brings out the desperate dignity of the cotton pickers as they slake their thirst in the heat, without even breaking from their cruel labour. Cotton Pickers, oil on canvas, has today a detailed accreditation.  It is described as the prior bequest of Alexander Stewart; Centennial Major Acquisitions Income and Wesley M Dixon Jr funds; Roger and J Peter McCormick Endowments; prior acquisition of the George F Harding (c) Benton Testamentary Trusts/UMB Bank Trustee/VAGA, NY/DACS, London 2016.

Benton is known for monumental public murals commissioned under the Works Progress Administration programmes which involved 8.5m people in all.

Another social activist, Alice Neel, is featured, represented by the portrait she made of Pat Whalen in 1935. This is in oil, ink and newspaper on canvas, and is from the collection of Whitney Museum of American Art, New York.  Alice Neel (1900-1984) champions the union organiser Pat Whalen as a blue-collar leader clenching his firsts as he approves of the strike headline in the Daily Worker and ready to take a part in the stoppages that would hit major industries.

One of the best-known names in Western Europe of this crop of energetic painters is Edward Hopper (1882-1967) who has two of his important works in the show. One is Gas from 1940, with a petrol station in a deserted landscape, and the other New York Movie of 1939, evoking a similar sense of desolation, despite the excitement of silver screen stories of the era such as Gone with the Wind and The Wizard of Oz.

Mass production introduced by the Ford Motor Company at its plant near Detroit is the subject in the photo-style American Landscape, by Charles Sheeler, from 1930. This is an oil on canvas, from the Museum of Modern Art, New York, where it was the gift of Abby Aldrick Rockefeller in 1934. The digital image is copyright MoMa/Scala, Florence.

The marvellously broad range of the curators’ choices includes an early painting from Jackson Pollock influenced by Picasso’s Guernica, which depicted the agony of civilians bombed by the German air force in the Spanish Civil War. The painting is in oil on linen, and from the Art Institute of Chicago.

Reports about Guernica and other atrocities inspired Philip Guston to paint, in Italian Renaissance-style tondo (circle) form Bombardment, and it has been suggested that it is a cry against violence more broadly. This is borrowed from the estate of the artist, who lived from 1913 to 1980. He executed it in 1937 in oil on masonite, and its home is the Philadelphia Museum of Art, as the gift of Musa and Tom Mayer, 2011.