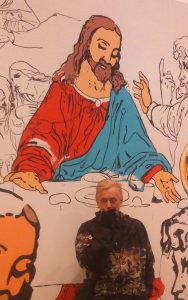 Unconventional, eccentric, much-loved – these are some of the ways people remember Daniel Brant, gallery owner and celebrated expert on Pop Art and on other contemporary genres. His many friends and colleagues in the world of fine arts were shocked to learn of his death, on January 19 2017 after a short illness.

Daniel was co-founder and managing director of A&D Gallery in Marylebone, from 2000.

An exhibition “in memory of Daniel Brant 1951-2017” of prints and paintings, many from his personal collection, is being staged at the West End gallery throughout March 2017. The exhibition is called Irrational Optimism, a phrase which explains Daniel’s approach to buying art for resale “because there is no ‘art standard’ set price for art.” 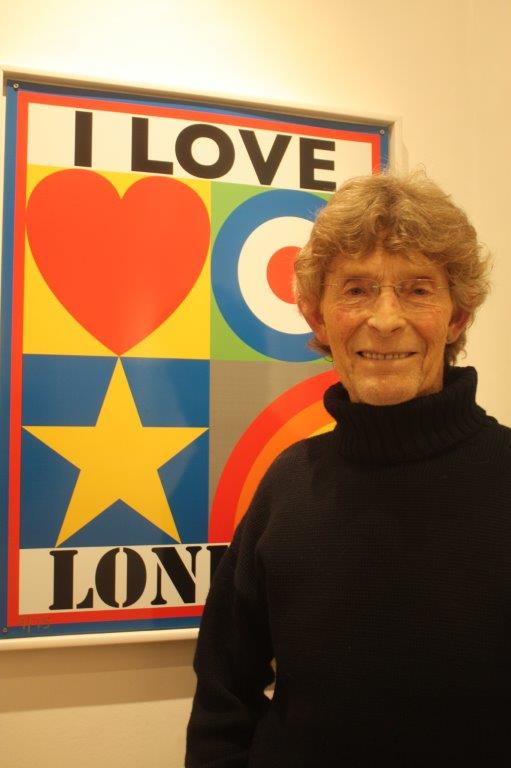 He always advised buyers to ignore investment considerations: “Buy the work you love.  It really will be ‘a joy for ever.’”

This philosophy is embodied in the A&D motto Inventas vitam Iuvat Artes – a version of the inscription on the Nobel medal of the Swedish Academy, which taken from Virgil’s Aeneid, is a reference to life being made beautiful by art.

Preview evening at the exhibition drew many of Daniel’s admirers – he encouraged present-day artists from London and elsewhere, in addition to championing the idiosyncratic circles of 1950s-onwards of New York – to reminisce about the exciting years as the gallery made its mark.  There was much emotion as the anecdotes flowed, often to gentle laughter.

Helen Clarkson, who had with Daniel owned the consultancy Graphic Entertainments before A&D Gallery opened, described him as “my best friend and partner in life as well as business. He was a very special man with a unique outlook on life.” 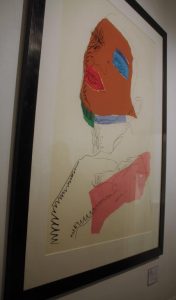 The gallery name originated in a collaboration with master graphic artist Andie Airfix (hence A&D, Andie and Danny). When they got together, Andie was busy with graphic projects. Daniel had a company which sold videos of Japanese animation, mainly about robots (toy robots were incidentally one of Daniel’s great passions). He was one of the first people to introduce Japanese cartoons to the UK market.

Disappointed at the lack of interest shown by galleries in their work, the two men opened their own gallery with a design studio in the basement. This attracted creative talent from near and far.

At the preview evening for the new show, Andie said that one of Daniel’s great qualities was that he was always honest, no matter whom he was talking to. Andie said that his friend had a wide scope of interest in fine art and was a great enthusiast for the work of Robert Rauschenberg (1925-2008) and Andy Warhol (1928-1987) and others in the period associated with them. It should be remembered too that he loved classical art, including masters of the Renaissance. The slogan at the gallery had been “we only do art that doesn’t match your sofa.”

Warhol is represented in the new A&D exhibition by several pieces, including a 1975 silkscreen print Ladies & Gentlemen, from an edition of 250. There is a 1984 screenprint of flowers, entitled Kiku, from the Japanese word for chrysanthemum. A 1964 original drawing is entitled Bird in Leaves; and a 1983 screenprint with paper collage is of an unfinished work The Source (after Ingres).

There are two charming Beatles-related items: character-development drawings for the film Yellow Submarine. One is of John Lennon in Pepper Band persona; the other is of “Young Fred.” The drawings were created under the auspices of Heinz Edelmann, the film’s art director. 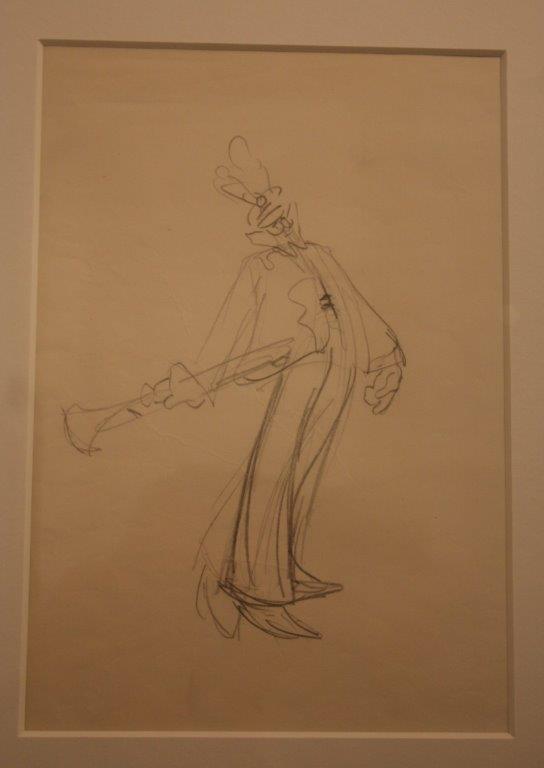 Of more recent date are two Julian Opie prints, Ruth with Cigarette and Ruth Smoking. Peter Blake has I Love London, a print on tinplate from 2010, one of an edition of 75.

Daniel was slow to flaunt his extensive knowledge of post-war art, but it was fascinating to listen to him in conversation.  In keeping with his modesty and zany humour, he listed his education on Linked In as Warren Dell Junior Mixed Infants, a school in Watford. That was all.

In an interview with www.man.london in April 2016, he said: “After 15 years of running the gallery, we firmly believe art has no function other than design. Art is both useless and essential and as such is perhaps a good way to assess the state of society. “ 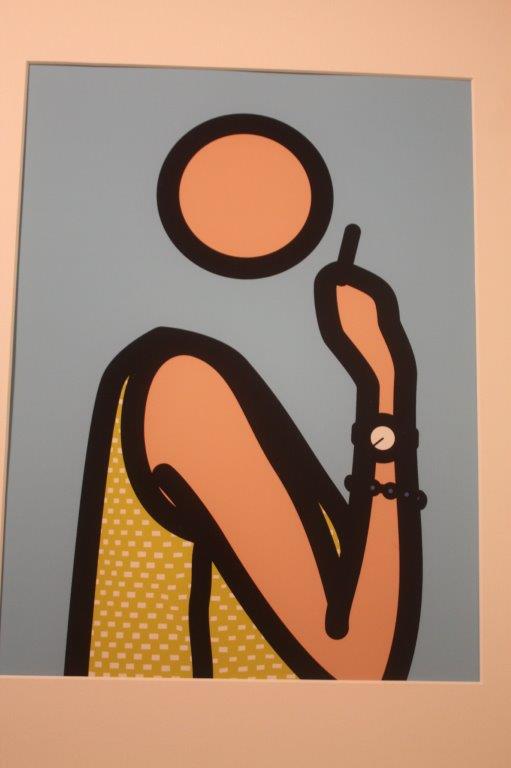 Asked to describe his gallery, Daniel said: “We try to show work that is stimulating and exciting, but believe that the visual arts should work without having to read the artist’s instructions on how to approach their work.”

In Design Week in 2003, Daniel was quoted as saying that the reason behind the gallery was “to find out what art is.” One of the shows in the early years was based on an invitation to 70 artists to draw or paint Valentine’s Day cards on portrait-format paper, a return to traditional craft skills. “I like ‘outsider’ art [by people untrained in the medium they’re using],” said Daniel.

Andie continued to amass credits for iconic styling: his website Satori Graphic says these included graphics for a Rolling Stones tour, the logo for Live 8, the Led Zeppelin DVD, the cover for The McCartney Years three-disc DVD in 2007, and corporate work. Other projects included a promotional brochure for Walt Disney movies.

Daniel told Design Week that designers can be entrepreneurial and cross over into art – “as long as you give up the idea of ever having money.” 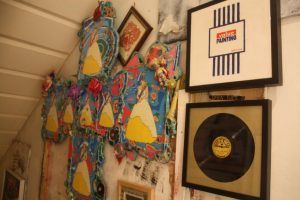 Art on the stairway at A&D Gallery.

Among Daniel’s treasured moments were encounters with Billy Name, the photographer at Andy Warhol’s studio known as The Factory, and who died aged 76 in July 2016. Billy Name was briefly Warhol’s lover, and more importantly pictured the men and women of Warhol’s flamboyant social circle, including the Velvet Underground and its singer Nico.

In 2004 A&D presented Billy Name’s first commercial gallery exhibition in the UK. Billy at that stage was unable to travel, so Daniel went to see him in the US to discuss his photographs “and as it turned out everything from Buddha to the roots of the American diner.”

Born William Linich Jr, Billy made his way from Poughkeepsie in the New York metropolitan area to the Big Apple, working as a lighting designer for contemporary dance groups and with the Fluxus group, then including Yoko Ono. While moonlighting as a waiter at a dessert restaurant where Marilyn Monroe and Jackie Kennedy were among the customers he met Warhol who was a regular.

Linich, renamed Billy Name by Warhol, encouraged the artist’s switch to fine art from the commercial variety. Seeing Billy’s silver-foiled apartment, Warhol asked him to decorate the former hat factory he had taken on in East 47th Street by covering the walls in silver spray paint and aluminium foil. 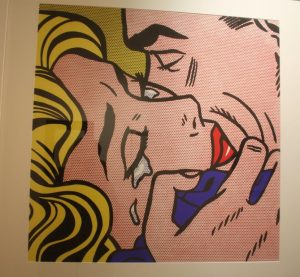 Billy became Warhol’s studio assistant, set designer and secretary then one day in 1963, Warhol put a camera in his hands and made him the ‘official’ photographer, after which he took thousands of pictures documenting the illustrious visitors to the premises.

Daniel wrote that talking with Billy at the latter’s home, it was difficult to get him to take credit for f his contributions and he was reticent about his importance in building the relationship between the Velvet Underground and Warhol. Billy’s photographs featured on three Velvet Underground albums and the cover of Nico’s first solo album, Chelsea Girls.

One night in June 1968, while printing in the dark room, Billy heard a bang “and there was Andy, lying in a pool of blood on the floor.” Warhol had been shot by a woman author later diagnosed with paranoid schizophrenia. The wounds apparently continued to bleed until the day the artist died in 1987. Billy was so shaken by the trauma he took to hiding in his darkroom, eventually leaving   the Factory.

At the time of a retrospective of Billy Name’s work – vintage photographs, silkscreen prints, video and audio installations and ephemera – at A&D in autumn 2016, Daniel wrote: “Billy was always generous to A&D Gallery, generous with his time when we visited him in Poughkeepsie, taking us on a guided tour of the Queen’s Museum when they re-staged Warhol’s 13 Most Wanted Men in 2014 and his participation in our Mail Art exhibition (a tribute to his friend Ray Johnson). 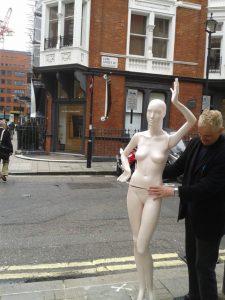 “Billy was someone you fell in love with as soon as you met him, he was the most charming, generous, modest man you could hope to meet.”

Writing in Record Art in January 2014, Richard Forrest said that Daniel mentioned that during the earlier A&D show of Billy Name’s work one room was decorated with silver foil tacked to the walls.

Richard Forrest said that Daniel told him that some of the album cover work attributed to Warhol was based on photography by Billy Name. Richard and Daniel talked about Warhol’s associate Billy Klüver, who with Fred Waldhauer, Robert Rauschenberg and Robert Whitman founded the innovative Experiments in Art & Technology (EAT) organisation in 1966.

At one point, Daniel put on a show of Warhol ‘fakes.’

In January 2016 A&D Gallery presented the memorable exhibition Robots Lift Art: Toy Robots and Man-Made Art. Daniel assembled a miscellany of toy robots (some including the cardboard boxes they came with), robot paintings and mixed media work, interspersed with bold contemporary paintings by favourite artists.  The robots were from the collection he had built up since 1978…

Daniel was famously camera-shy, but we have been granted the privilege of publishing two rare portraits – well, as near to portrait as possible – of him.  The first is courtesy of A&D Gallery, and demonstrates what a huge fan of Warhol he was. It was taken in early February 2016 at the Gagosian Gallery London.

The second photo is courtesy of his friend Graham Hunter. Graham told us: “we collected this [shop display] model from a skip while walking from Baker Street to Cork Street to take in a show at the Alan Christea gallery. The trouble is we had to leave her standing there while we went in, and on the way out, Brant had gone right off her. She was thus abandoned.”

Living in Sweden, visiting the A and D Gallery was one of my priorities on my (not so) regular visits to London. Helen would provide a cup of tea and Danny would educate me on all things Warhol and on pop art in general. Being asked to show my collection of record covers by Peter Blake at the Gallery was a real thrill for me. Daniel’s stimulating conversation will be sorely missed.