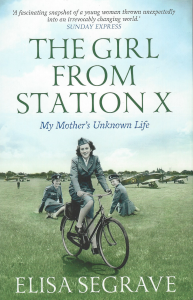 Author and diarist Elisa Segrave is to talk for the first time about the romantic experience of her mother who was working for the Allies in Germany immediately after the end of World War II.

She will give a talk, open to the public, entitled Romance in Post-War Germany, as part of the Women in War group’s series of events, on March 22 at the Polish Hearth Club, 55 Princes Gate, London SW7.

Her account will be illustrated by extracts from the diaries of her mother, Anne Hamilton-Grace, and with letters from the man with whom she fell in love.

Although Elisa has spoken before about her mother’s past helping to win the ‘secret war’ in Bletchley Park intelligence, she has never detailed her mother’s post-war romance with an American serviceman.

Elisa said: “My mother Anne Hamilton-Grace was in the WAAF throughout all six years of the war. She was in Bomber Command, and served a spell in Hut 3 at the now famous Bletchley Park code-breaking centre.

“Anne’s last six months of service were from June to November 1945 in post-war Germany, where she had a romance with an American, Joe Darling, who was working for General Eisenhower.

“Joe wrote my mother over 100 love letters and, on her days off, took her in a weapon carrier (driven by Joe’s driver Barnes from Tennessee, half German and half Cherokee Indian) around the bombed towns of Germany. Joe’s job was to find ‘clean’ Germans for the new German government.

“My mother got to see Berlin in August 1945, by then full of Soviet soldiers. She describes all this vividly in her diaries. I will quote from them and from Joe’s love letters.”

Elisa’s book The Girl from Station X, about discovering her mother’s secret life, was published in 2014.

A public talk, Women in War – Romance in Post-war Germany will be on Wednesday March 22 2017, 6.30pm for 7pm at the Polish Hearth Club, 55 Princes Gate, London SW7. Tickets are £15 for members of the Polish Hearth Club, £10 for students, and £20 for guests, available at the door. Advance booking can be obtained by emailing Malgosia, Lady Belhaven & Stenton, at ladybelhaven@hotmail.com.