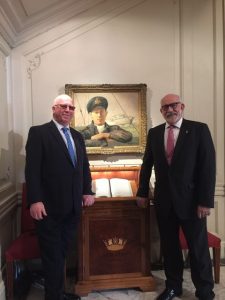 Ken McLean, vice-president of the Port of London chapter of the New York-based Propeller Club and John Faraclas

Hidden currents – that is, hidden to the general public and even to some in the maritime sector –are swirling beneath the global shipping industry This warning was delivered in an address by John Faraclas to members of the Propeller Club at a lunch in London.

John Faraclas, co-founder of this site www.allaboutshipping.co.uk forecast that fundamental changes loomed for reasons that were geopolitical, financial, technical and regulatory.

His straight-talking message prompted lively discussion at the event, which was at the Naval Club in Mayfair on March 7 2017 and chaired by Ken McLean, vice-president of the Port of London chapter of the New York-based Propeller Club. 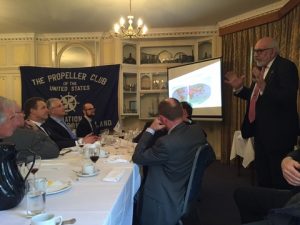 Mr Faraclas said that from every quarter there were threats to the ‘certainty’ which many in the shipping industry craved. He was speaking from experience over the years in shipping-related roles as manager, broker, analyst and journalist. He ranged widely in his speech on The state of the shipping market and geopolitics affecting the same.

At its kernel was a list of critical points from a geopolitical perspective.

He said that one must look at what was going on throughout Planet Ocean. One factor was that many of the straits through which shipping passed and relevant land logistics routes were within or bordered by countries or areas with Islamic influence.

Other hot topics such as “the uncertain relationship between the Trump administration and Iran – which could undo the quasi-normalisation of shipping and trading between the two nations that has occurred in the past 12 months” were a cause for worry. 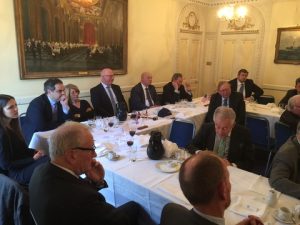 A view of the top left side of the guests attending

“What is the future for sanctions on Russia? American protectionism is of concern, but so is China’s One Belt, One Road policy which could stimulate new markets but give Beijing greater control over the seaways – look how China has come into conflict with Japan, the Philippines and other neighbours over questions of jurisdiction of the oceans.

“How will migrant flows across the Mediterranean disrupt further relations between countries? How expensive will Brexit be for the UK, and for the European Union – will Britain divorce itself from some shipping regulation?”

Inadequate funding of marine salvage threatened to create hiccoughs. Salvage must be paid for on commercial terms, otherwise it could disappear in the next decade, he warned. We must never forget tragedies such as the capsize of the Herald of Free Enterprise, which had just marked its 30th anniversary. Mr Faraclas said it was essential for the International Maritime Organization to retain primacy over the European Union and other parties over safety rules. 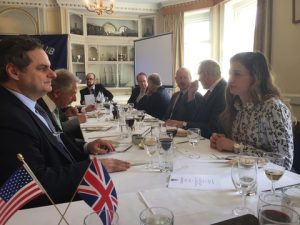 The left side of the Pi shaped table during lunch

On the question of autonomous vessels, the speaker referred to remarks by Helle Hammer of the Norwegian marine insurers’ association Cefor and chair of IUMI political forum, who has said: “In addition to the regulatory and liability aspects, insurers need to address the risks related to new technologies and the internet of things. Cyber-attacks, connectivity, complex technologies, and autonomy-assisted accidents are among the challenges. Insurers will expect classification societies to become involved in the approval of big data and automated operational procedures in order for these to be insurable in the future.”

For young maritime students, contended Mr Faraclas, there were things missing from the curriculum – in some cases mentorship, and 90% of them had never been to sea. “You cannot win the war without going to the battlefield itself.” 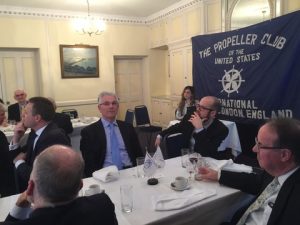 In a break in the meeting for comments by those present, Mark Hoddinott, general manager for the International Salvage Union, endorsed the speaker’s concerns over the future of his sector. “We have been seeing that the salvage industry is not funded, and a drift away from the Lloyd’s Open Form which is an encouragement to the salvor to invest in equipment and personnel.” The prediction of an early demise of the industry without remedial action was correct, said Mr Hoddinott.

Andrew Winbow, former safety director of the IMO, concurred with the stance of John Faraclas that IMO should be the only body to regulate safety, but cautioned that the attitude of some member states was weakening over the development of new standards.

Moving to the question of the reputation of shipping, Simon Tatham, a partner at law firm Tatham Macinnes, underscored the importance of English law. He cited an instance where even though key parties to a casualty were uninsured, there was an English law contract in perfectly worded English. “English law is to a great extent what holds it [the integrity of shipping] together,” said Mr Tatham. “There is a role we play in London to keep shipping on the straight and narrow” amid different cultures and languages.

Richard Grimes said that life on board ships had changed dramatically in the last 15 years, but the industry was not ready for unmanned ships.

Mr Faraclas had begun by reminding the audience of the sharp drop in 2016 by the Baltic Dry Index to its lowest level. After falling below 700 points, today the index had risen to above 1,000, but one should remember that the December 2013 figure of 2,220 points “is the level to bring some returns. Below this level, it is a lost case. [for viability].”

He said that the shipping industry itself was still racked by chronic instability – witness the big consolidations in liner trades which still do not appear to have halted the plunge in rates in a meaningful way. Financing was a headache too – an article in Lloyd’s List Intelligence in December 2016 reckoned there was “$20bn of dodgy shipping debt,” as the headline put it, with “much more not on our radar screens.” Borrowing costs were set to rise under the latest tranche of Basel regulations.

Under the radar of many in the West were geopolitical factors impacting shipping including the financial turmoil in South Korea – events which have merited little coverage in international media, even with the attempted impeachment of the country’s president, allegations made against the heir to the Samsung Group, and the bankruptcy of the major liner player, Hanjin Shipping. South Korea’s shipbuilders have taken the axe to their own facilities and workforce numbers. It is reported that only one of Korea’s top shipbuilders managed to win an order in February: Hyundai Heavy Industries won an order to build two VLCCs from a Greek business, but Samsung Heavy Industries and Daewoo Shipbuilding were empty-handed.

In fact, Greek owners have been among the leading motor-forces in ordering newbuildings, as they have a generally positive outlook for freight markets for the short to medium term.

The speaker highlighted the important relationship between “the island nation” which is Great Britain, and the “islands nation” which is Greece. “We cannot stand the situation of ‘new kids on the block’ distorting our industry” by challenging the “traditional shipping ethic.” The Greek-British relationship in shipping had not been replicated elsewhere, even by the New York Greek community. The City of London had created a unique base for business.

The “scam” of banks (which he blamed for machinations over choice of ship flag), brokers and shipyards “have created havoc in our industry, and it is the public that pays its debts. The banks and the brokers wanted to have high commissions, and the Americans wanted to start Far Eastern shipbuilding… to secure the peace the way they wanted.”

Going into further detail on the marine insurance market, Mr Faraclas said the IUMI statistic was that that global marine premium decreased from $33.4bn in 2014 to $29.9bn in 2015, although one would have thought the growth in world trade and the world fleet should support insurance demand. He speculated that the premium figures were unlikely to be much better for 2016 and 2017.

Marine insurers had concerns among other things over major fires on container vessels which they describe as among the worst hazards in global shipping. In 2016 alone, there were three major fires: on the Maersk Karachi, NNCI Arauco and Wan Hai 307. All three ships required external help to extinguish the fires, despite two being in the harbour and the third anchored just off Hong Kong. In February of this year, IUMI published a position paper on fires on ro/ro passenger vehicle decks. It said: “Marine underwriters have witnessed that the frequency of fires in the car/ro-ro passenger vessel segment is increasing and is currently at a level twice the frequency of fires on most other vessel types.”

The International Association of Classification Societies is aware that as well as hull and machinery, on-board electrical equipment is becoming increasingly important for the safety and security of a vessel and therefore should be covered by the work of classification societies.

On the macro-level, insured loss estimates from major natural catastrophes in 2016 reached $39.5bn, the highest since the 2012 experience of $60bn in 2012, according to the reinsurance broker Willis Re. The largest single insured loss came from an event which had minimal coverage over here: the Kumamoto earthquake in Japan in April 2016 with losses exceeding $4.8bn.

The insurance market still has an oversupply of capital, and despite the heightened risks, for instance Beazley, a leading insurer at Lloyd’s and internationally, and one of the top marine insurers, has seen marine rates decline steadily at renewal: down to 79% in 2016 taking 2008 as 100%. Beazley’s chief underwriting officer said that there were both macro-economic drivers of lower demand and rates such as the relatively low price of oil, and geopolitical drivers such as reductions in the areas of seas which are designated as war areas.

Mr Faraclas described Allaboutshipping as a free platform, compared to other, biased media which he described as “His Master’s Voice, which is pathetic particularly as we are living in 2017” and “a state within a state – and this situation must end.”

The BDI over the 1,000 point-threshold amid changing geopolitics…

Many thanks for a most thought-provoking presentation “touching the parts that other speakers never reach”.

I was wondering what your views are on the fast approaching regulatory tsunami which will cost the industry over ten times more than all the new regulations imposed over the past 40 years (such as GMDSS, ISM, ISPS, CSR, MLC etc) combined.

Do you believe that many traditional small to medium size players will be able to survive (especially taking into account the financing bottleneck you referred to on Tuesday)?

We are regular followers of your website, and would like to thank you for your thorough analysis.

Perhaps a good idea for research (in academic level at least) would be to examine whether a wise protectionism may (paradoxically) bring beneficial results in deficits of counties and that are admittedly attributed to the
China-zation of the global manufacturing business. We shall see…