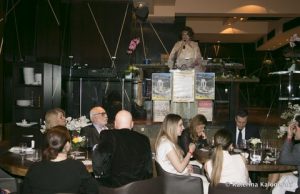 The guest of honour was Michael Scott, Associate Professor of Classics and Ancient History at the University of Warwick, widely known as a familiar presenter of TV historical documentaries and author of books on ancient Greece and Rome. 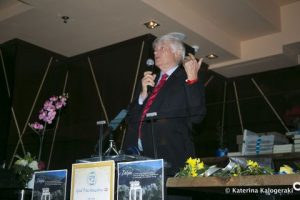 Dr Scott spoke about the importance of the Oracle of Delphi in ancient Greece, as a place where Greeks of rival city states often declared war and where occasionally they decided to join forces against the common enemy.

He also spoke about the exceptional spirituality of the place, uniquely described in his book ‘Delphi: A History of the Centre of the Ancient World’ (Princeton University Press, 2014), which for him attests to why Delphi was known as “the navel of the world”.

Michael Scott said that Greece’s history, contribution to civilisation and aura of places such as Delphi could still make the country a spiritual centre of the world, with Delphi serving as a meeting point for the powers that be. 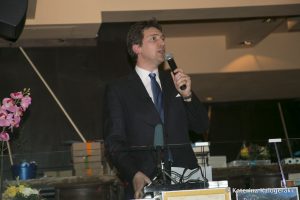 As a token of appreciation for Dr Scott’s contribution to highlighting the ancient Greek culture and history, the GPA presented him with a small but symbolic gift – a baby cypress tree grown from the seed of a cone coming from the ancient precinct of Delphi.

The Association is also prepared to send a handsome number of Delphic baby cypresses to the University of Warwick for planting on the campus which is currently under expansion.

The other guest speaker was Geoffrey Robertson QC, founder and joint head of Doughty Street Chambers, who -together with his colleague Amal Clooney- recently compiled a legal opinion on how the Greek government could proceed with claiming the Parthenon Sculptures currently exhibited at the British Museum. 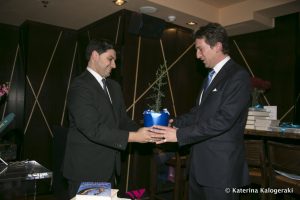 ..As a token of appreciation for Dr Scott’s contribution to highlighting the ancient Greek culture and history, the GPA presented him with a small but symbolic gift – a baby cypress tree grown from the seed of a cone coming from the ancient precinct of Delphi.

Although Mr Robertson is not employed by the Greek government any more, he presented for the first time during the GPA dinner a new suggestion: that Brexit could bring the issue of the Parthenon Sculptures to the fore yet again.

The distinguished barrister noted that Brexit means that the UK will not be bound by Article 3 of the EU Treaty which states that each member country must “ensure that Europe’s cultural heritage is safeguarded”. According to Mr Robertson’s suggestion, Greece would therefore have good reason to try to persuade its fellow member-states to include the restitution of the Parthenon Marbles in their list of negotiation demands, in exchange for satisfying one of the UK’s likely counter-demands 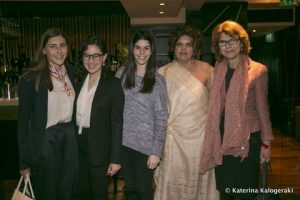 The guests were welcomed by the Greek Press Association President Martha Petridis (née Chryssomalis), who reminded everyone of the long historical presence of Greeks in London, dating back to the mid-17th century at least. 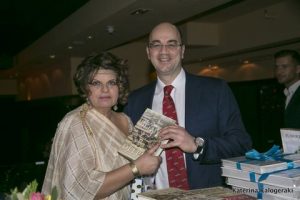 The event was held under the auspices of the Minister for Tourism Mrs Elena Kountoura and was organised with the kind support of the Greek National Tourism Organisation’s office in London, the Messenian Society, Critical Publics, Athena Paris-Theofili, Matti Egon-Xyla, Peter Strong, the Hellenic Bankers Association-UK, the Hellenic TV and the London Greek Radio (LGR 103.3 FM). 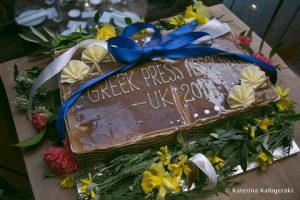 Festina lente for the Markets and Geopolitics