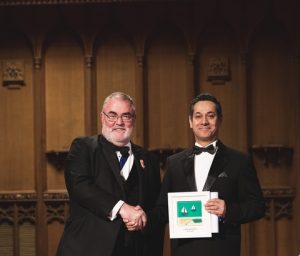 Nikeel Idnani, Honorary Secretary of the IMarEST UAE branch was awarded the worldwide ‘Marine Ambassador’ for 2016.  This honour is bestowed on that individual who has made a significant contribution to advocacy, communication, outreach and/or public service in the marine sector.

Following a New Zealand member’s nomination, careful consideration by the IMarEST Professional Affairs & Education Committee and Board of Trustees resulted in Nikeel being deemed the worthy winner of the award for his efficacious work in 2016. He was invited to the prestigious IMarEST annual dinner, where he was presented with a trophy and certificate of excellence by Prof. Christopher Hodge, 115th IMarEST President, in the City of London’s magnificent medieval Guildhall.  The Black-Tie event was a rendezvous for 504 global marine professionals across all disciplines, for an exclusive evening of networking.

Nikeel was selected the Marine Ambassador for his exemplary work as Honorary Secretary of the IMarEST UAE branch based in Dubai, since September 2012. He has turned around the dormant UAE branch and raised the visibility of IMarEST in the Middle East maritime industry including diligently organising 10 highly successful technical events in 2016. Regular technical and social occasions of the IMarEST UAE Branch are very well attended and provide the basis of information exchange, social and business interaction.

Nikeel leverages on 29 years of experience in the marine business during which he has developed dependable relationships with a broad spectrum of marine professionals to play the quintessential Marine Ambassador for the IMarEST and maritime industry at large.

Nikeel said, “Although it’s hard work, I enjoy the service for the IMarEST. Winning this trophy and certificate propels me to carry on the voluntary work for the IMarEST and offers guideposts to continue along the path of knowledge sharing and creating learning opportunities for the Middle East maritime fraternity. Thank you for recognizing my efforts”.

The IMarEST was originally established in London in 1889 as The Institute of Marine Engineers and is now the leading international membership body and learned society for all marine professionals, with over 20000 members worldwide, comprising individuals from across the engineering, science and technology spectrums. Members come from a wide range of ocean-related sectors including: oil and gas exploration, extraction and processing, ship building, repair and maintenance, the defence sector, naval personnel across engineering, hydrography and meteorology sections, merchant navy officers and cadets, seagoing and offshore engineering personnel, classification societies as well as engineering and science university students. The Institute has a strong international presence with a network of approximately 50 branches around the world, affiliations with major marine societies, and is registered with several intergovernmental and nongovernmental bodies including consultative status with the International Maritime Organization (IMO).

Diana Containerships Inc. announces up to US$150 million securities offering