A kaleidoscopic, fivefold vision of the impact of the 20th century composer and pianist André Tchaikowsky (1935-1982) thrilled a discriminating audience at an evening in London celebrating his life.

Two surprises featured in a vivid two-hour narrative extolling the musical genius who was born Robert Andrzej Krauthammer. First was a rare performance of a partita for piano composed in his honour by an accomplished London musician; and rounding off the tribute was the unveiling of a new portrait, oil on canvas, of André Tchaikowsky by a leading contemporary painter.

Guests at the event, at Ognisko Polskie (the Polish Hearth Club in Exhibition Road, Kensington) already knew that they were to be treated to an expert summary of Tchaikowsky’s life, to see excerpts from a touching film biography, and to hear a performance of Tchaikowsky’s songs by two top London recitalists.

The whole-hearte commitment of the organiser of the London event, Dr Anastasia Belina-Johnson, to the man’s musical legacy is going a long way to reviving his reputation. Once celebrated in Europe and North America, the composer has in recent times been deprived of the scale of recognition he deserved, a neglect which followed from his reticence in public performance and his volatile temperament.

Dr Belina-Johnson introduced to the gathering Rodolfo Villaplana, who is gaining a name as one of the most talented painters in the capital, and who working from archival photography has in a dramatic full-face portrait captured the animus of his wayward subject. The Polish-born British composer and pianist is shown as a young man with a shy downward glance but with his lurking, wicked sense of humour evident in smile. The monochrome face against a red background underlines that here was a troubled personality of the mid-century who would have accomplished much more had he not fallen victim to cancer.

Rodolfo Villaplana completed the portrait in time for the Polish Club event on March 24 2017, but just too late for inclusion in his solo exhibition the previous month at D-Contemporary Gallery, in Grafton Street, Mayfair. “André Tchaikowsky is a great musician and I was honoured to have painted him for the presentation and concert,” said Rodolfo.

The painter carries into his interpretation of Tchaikowsky the kind of psychological insight he has deployed in his other works, which – thanks to some male (including a self-portrait) and female nudes stripped to expose the inner energy of the sitters – remind some critics of a more sympathetic Lucian Freud. He is unafraid to court controversy: one of his earlier works, Ratzinger Revisited, was a harsh portrait of the former pope Benedict XVI, now pope emeritus.

Originally from Valencia, the third largest city of Venezuela, Rodolfo has spent six years based in London, where he completed his MA studies at Chelsea College of Art. He was prominent in the Young Masters 2013, showed his work the following year at the London Art Fair and PINTA international in London, followed by Art Venice Biennale 3 and a lengthy exhibition at MoMa Tbilisi, Georgia, and in 2016 was chosen to represent the UK in the Iranian Biennale.

One critic, Dr Thierry Morel has written of Rodolfo’s “uncompromising courage verging on brutality, in order to portray ‘the inner being’ that he perceives in his sitter’s body and gaze.” 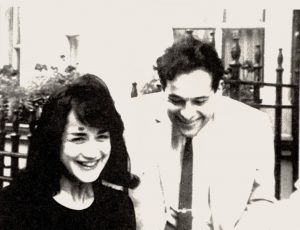 The evening’s surprise piece for the piano was written by Stephen Roche, now aged 81, and played by his brother Henry, younger by 10 years.  The Roches are a distinguished musical family and the brothers have long been close to the world of ballet. Henry is retired after many years as director of music of the Royal Ballet. They are descended from the renowned Ignaz Moscheles, a pupil and friend of Beethoven.

In 1965, at a school in Kent, Stephen overheard Tchaikowsky playing Bach’s Partita in B minor (French overture) BWV 831, and the first movement of a Beethoven sonata. “It was powerful and sensitive playing,” said Stephen. “I thought he was a wonderful pianist. I did not realise that his heart was in composition rather than in performance. I wrote this piece [dedicated to Tchaikowsky] a few months later.” Stephen recalled that it was a time of tribulation including worldwide concern about the Vietnam war.

The opus, the last to be written by Stephen, is nine minutes long, and Henry characterised it as having “a certain amount of Bach inspiration, although it might seem more Beethovenian to us.” Henry’s assured performance drew prolonged applause for its intensity and grandeur: the playing possessed that touch of mystique with which the dedicatee would beguile his audiences and his intimates.

Writer and musicologist Dr Belina-Johnson, who is assistant head of undergraduate programmes at the Royal College of Music, has spent more than five years researching Tchaikowsky’s trajectory – he was one of a generation of Polish Jews whose life stories are harrowing and tragic, she said.

Tchaikowsky hated his pseudonym but he could not change it as he came to fame early in his career. “The best he could do was to refuse to perform any [music by the 19th century Russian composer Pyotr Ilyich] Tchaikovsky, even when he was asked by his agent.”

André was born in Warsaw in 1935, and to avoid the fate of the Ghetto his grandmother hid him in as many as 10 or 15 places, and one of these was a wardrobe – it is difficult to know whether the last ruse went on for weeks, months or just days. It was an ‘Anne Frank’ like existence, locked away, hardly ever seeing daylight.

When he was smuggled out of the Ghetto in 1942 he was given the false name Andrzej Czajkowski (later transcribed to André Tchaikowsky), because a friend of the family was a Mrs Tchaikowska and it was thought that if need be he could pretend to be related to her.

The wartime trauma cast a shadow over the rest of his life: “his suffering was internal, not external,” says a friend.  “He did not like to remember the past.”

He had tremendous memory and technical ability as a pianist. All he wanted to do was compose, but he needed to earn a living, by playing, said Dr Belina-Johnson. He had an international concert career and settled in England in 1960. At the end of his life he made the decision to become a full-time composer, but unfortunately that did not happen. “He would have been a household name, had he lived longer and been a little more amenable.”  As he lay dying, he was so keen to finish his one opera that he refused morphine injections to stem the pain. The opera, The Merchant of Venice, was given its world premiere only in 2013, in Austria in 2013. The London premiere, sung in English by the Welsh National Opera, will be at the Royal Opera House on July 19 and 20 2017.

Excerpts from the documentary film Rebel of the Keys showed how André endured several failed love affairs, was openly homosexual despite the stigma of the times, yet hoped that a woman would be the ‘saving of him’. He was close to the Polish writer Halina Janowska, who is recorded on film close to tears as she recalls “the great love of her life” and consummation of their relationship which was however doomed.

He was attractive but found it difficult to maintain friendships. His honesty is encapsulated in this quote: “if I am sometimes taken for a misanthrope, that is because I have a horror of receptions, snobs, and society gossip.”

Dr Belina-Johnson travelled to the Royal Shakespeare Company’s store of props at Stratford-on-Avon to request sight of the skull of Tchaikowsky. He made this macabre bequest to the theatre company to be used in a scene of Hamlet, as a symbol of his appreciation of the Bard. The skull was brought on stage, only once, by the actor David Tennant in 2008. Dr Belina-Johnson is shown in the film nervously watching a props specialist unwrap the brownish skull from its protective box. She is asked: “How does that feel” and replies “very sad… but I feel I am meeting him for the first time.”

A persuasive performance followed of Tchaikowsky’s Seven Sonnets of Shakespeare (1957), sung by mezzo-soprano Rosanna Cooper whose beautifully-honed diction and poise highlighted gloriously the drama and pathos of the 400-year-old verse. Her mastery of shades of meaning was stunning.

Rosanna’s authoritative accompanist was Nico de Villiers who brought to his pianism a rigorous brilliance which doubtless would have delighted André Tchaikowsky, whose work he has studied closely – he played some of the composer’s sonata in Rebel of the Keys.

More can be learned about the composer from Dr Belina-Johnson’s extensively-researched book A Musician Divided: André Tchaikowsky in his own Words (Toccata Classics, 2013), and from the websitehttp://andretchaikowsky.com with its high-quality essays and evocative photographs of the composer from boyhood and other phases of personal life, to international success. He is shown alongside pianists of the highest standing, including Martha Argerich.