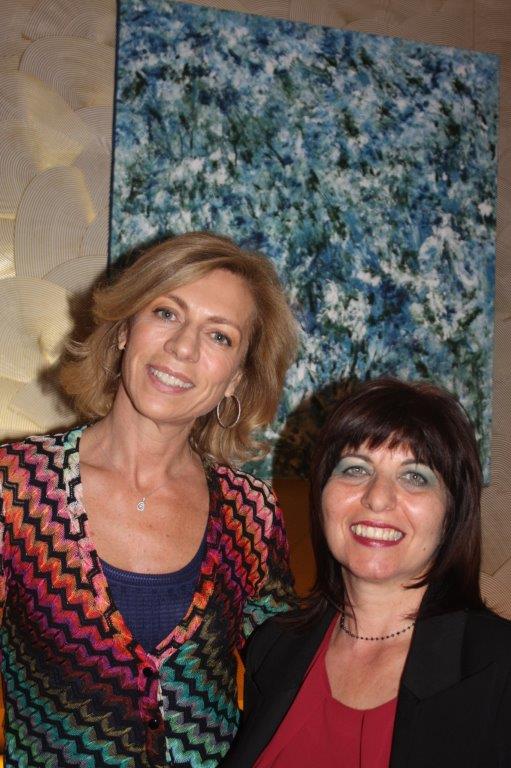 As a committed artist, Silvana Salinaro feels the psychological pull of the sea that surrounds her Sicilian homeland despite her family lacking the maritime connections of many of her compatriots. To her the nautical heritage of the island that was coveted through the ages by countless kingdoms is more than a metaphor. It is so important that she incorporates crystals of sea salt into some of her striking abstract paintings.

Salty additions were integral to the process of creating two of the 17 vigorous abstracts in her first solo exhibition in (and first visit to) London. Those who know the Italian language will realise that in a fortunate co-incidence Silvana’s surname refers to a person who sells or applies salt.

Her work is on display at the chic Hotel Baglioni in Kensington which describes itself as “an Italian heart” beating in the capital. Here, London-based curator and fellow artist Carola Syz, who has extensive involvement in the fine art scene in the Italian community and more widely, deserves generous credit for bringing to the UK talent from beyond the more familiar art centres of her native country.

Her enterprise Carola Syz Projects invited the artist –a deeply imaginative personality – from the largest island in the Mediterranean but one which attracts scant attention from northern European art circles. 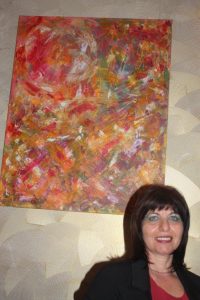 Silvana with her acrylic Sole Dentro.

Carola’s initiative enables a much wider audience to experience Silvana’s mesmerising and often frenetic colour combinations which are a compelling manifestation of her yearning to get close to glorious nature and to the life force of the Mediterranean. The abstract compositions pour forth what she calls l’emozione del’alma – emotion that comes from the soul.

Symbolic of her consciousness of her natural environment, Silvana insists that she lives “by the sea” even though her home is a short distance inland. The two current paintings into which she embedded salt show respectively her mastery of the red and blue palettes. One is entitled Voglia di Colore, and the other Mare.

Salt has great significance in Sicily, where it has been called “white gold.” A main area of production since the 14thcentury is in Trapani, the neighbouring province to Ragusa where Silvana lives and works. At its peak in the 19thcentury, pans along the Salt Road of Trapani and in other localities were drained of more than 100,000 tonnes per year for export to markets as far away as Norway and Russia.

These days an autonomous region of Italy, Sicily boasts an illustrious history which in the modern era began with the Phoenicians and Greeks. 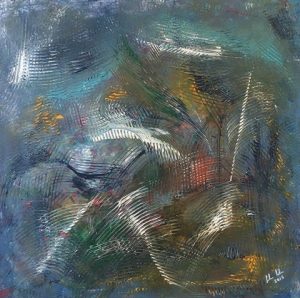 The prodigious colours and light bursting from Silvana’s work are as though a reflection of her origins in the island.

Silvana’s approach to her art and philosophy can be reduced, if that is the right word, to a boundless “joy of beautiful things.” In her canvases, she gives free rein to her spirits, with the intense reds and blues enhanced now and again by collage to reveal more fully the glories of plant life and the depths of the sea. Colours explode, diffuse and subside, for she wants “to stir the soul of the viewer.”

The universe is part of us as we are part of it, she says. We need simply to let it flow inside us to feel the disposition of a tree or flower, air or water.  Through beauty we can grow and get the best out of one’s self.

She crystallises her epiphany thus: “In the small white space of my canvas I found immense freedom.”

Silvana was born in a small town with a freighted name and one shared with the largest city on Cyprus: Nicosia. The name of the Sicilian town too may derive from its foundation by the Greeks, from association with St Nicholas or from the Greek words for City of Victory.  Later occupied by the Romans, destroyed by Barbarians but reconstructed under the Normans, the modern Sicilian town may have been founded by Byzantine colonists in the 6th century. The small settlement currently with 15,000 people is said to be the birthplace of St Felice (1715-87) and once had its own salt mines. 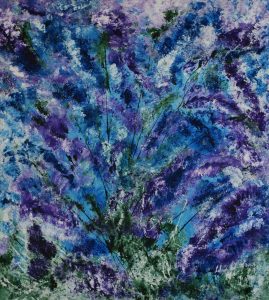 Untitled. Acrylic and collage on canvas.

The landscapes of the province of Ragusa are less travelled on the tourist trail than they deserve, but readily identified by many TV viewers thanks to the series Il commissario Montalbano. Based on the detective novels of Andrea Camilleri, the programmes were produced by Italian state broadcaster RAI from 1999, with some episodes shown on BBC, French, Spanish and US television. They set stories of police Inspector Salvo Montalbano in an imaginary Sicilian town.

Silvana is now based in Vittoria, a city of 60,000 people, which is 25km from the provincial capital, Ragusa. The city was founded in 1607 in honour of Countess Vittoria Colonna, and overlooks the fertile plain cultivated by the Greeks and known to the Romans as Plaga Mesopotamica Sicula (Mesopotamia of Sicily).

Silvana says that she paints only on sunny days, which means it is fortunate for those who admire her output that she is based in Sicily. “Painting is my essence, the nucleus from where I get my strength and energy. When I paint, it is like my own soul came out of the prison of flesh, to explore what surrounds me, to gain from this reality new ideas and emotions.”

As attested by the late Howard Hodgkin, abstraction can encompass emotion as readily, often more so, than figurative painting. She says: “I realised that my soul more and more merged with my canvases, my brushes and my palette, so much that I could not tell where one started and one ended.” 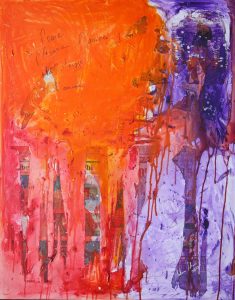 Silvana studied at the Istituto d’Arte in Siracusa, and key moments in her career were meetings with two celebrated painters. One was Daniel Schinasi (born 1933), founder of the dynamic and sensitive Neofuturist movement, and the other Francesco Giombarresi (1930-2007), known as “the peasant painter” but a better description for the poet, author and actor would be polymath.

Although this is her first venture to the UK, Silvana has taken part in exhibitions in Monte Carlo, Brussels, Vienna, and Italian cities including in October 2015 at the Civic Gallery Montevergini, Siracusa, in a show entitled Invisible Harmonies. Her artworks are in private collections in Italy, China, US, Switzerland and Greece – and one is in the collection of the rock star Bono.