The winners of 2017 GREEN4SEA Awards announced 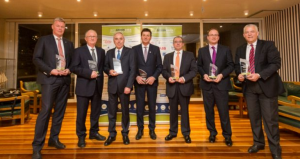 The winners of the 2017 GREEN4SEA Awards

GREEN4SEA announced the winners of the 2017 GREEN4SEA Awards at a prestigious awards ceremony which took place one night before the 2017 GREEN4SEA Conference, on April 4th at the Yacht Club of Greece. The GREEN4SEA Awards were awarded to organizations that demonstrated outstanding performance within the scope of fostering Environmental Excellence & Sustainable Shipping following an open nomination process.

The winners of the 2017 GREEN4SEA Awards are:

SEA\LNG received the GREEN4SEA Initiative Award for bringing together industry’s key players with the aim to break down the commercial obstacles and transform the localized use of LNG as a marine fuel into a global reality. Other short-listed nominees for this category were: GloMEEP, Liberian Registry, Magnuss and Ursus Maritime Capital.

Presenting the award Mr. Panos Yannoulis, President of OCEANKING, on behalf of the sponsor stated:

“In a highly dynamic, competitive and globalized business field, such as shipping and marine technology, initiatives are important to be recognized. Therefore, it is a great honor that OCEANKING is sponsoring this award. We are excited to announced that the GREEN4SEA Initiative Award goes to SEA/LNG initiative for which major industry’s stakeholders have joined forces with the aim to break down barriers for the taking off LNG as marine fuel in a global scale.””

“I’m very pleased to accept the Initiative Award on behalf of SEA\LNG. The coalition was launched only 10 months ago with a mission to accelerate the widespread adoption of liquefied natural gas (LNG) as a marine fuel for cleaner maritime shipping, so it’s humbling to see that the efforts being recognised. We’re dedicated to highlighting the viability of and demand for LNG across the maritime value chain, creating the necessary confidence between each link, and addressing the commercial barriers to LNG in the deep-sea shipping segment.”

‘’We are delighted to present the Clean Shipping Award this year to DFDS, a prominent ship operator who has been distinguished for many sustainable practices. DFDS has set the direction towards a greener industry, reducing their fleet environmental impact by examining many alternative options assisted with hands on decision making. It is time for everyone in the industry to take initiatives towards cleaner and safer seas. To do so, we have to learn from the best and we are glad to say that DFDS is undeniably one such example to follow“   ”

“First of all, we would like to thank ERMA FIRST for sponsoring this award and GREEN4SEA for arranging this event. It is always fantastic to be recognized, whether you are an individual or a company. However, we urge industry always to set higher ambitions that what DFDS has delivered. If the industry does now set own high standards, we will be told what to do and we may not like what we are told. So my request is to go beyond compliance and set aside a budget that will please future generations and not just the short term cash flow. I had the pleasure of working for Maersk McKinney-Moller for 36 years and one thing we learnt and never forget are the wise words: “The one that has the ability have the obligation” ”

“Verifavia Shipping is honoured to be sponsoring this award. As a Double Full Accredited EU MRV Verifier (UKAS & COFRAC) we are working in close partnership with ship owners and operators towards effective monitoring & managing shipping’s carbon emissions. It’s great to see that ABB has a dedicated sustainability focus which balances economic success, environmental stewardship, and social progress to positively impact the industry in which we operate and is also in the final stages of certifying her EU MRV solution with Verifavia Shipping.”

“I feel deeply honored by receiving this award and I would to thank you all for your support. We are going through turbulent times, so this award provides us all with the energy and the motivation to strive for top-notch services both in technology and customer service. In this context, as the new era approaching us has certain demands, such as fuel savings and low maintenance costs, we have developed Innovative Energy Efficiency Solutions that have been welcomed by a few of the largest shipping companies in Greece.  ”

MARTECMA received the GREEN4SEA Excellence Award for bringing together Greek Technical Managers to share experience feedback on how industry should tackle emissions by identifying the technical requirements of the abatement technology and scrubber designs. Other short-listed nominees for this category were: ESPO, IHMA, INTERTANKO and Port of Gothenburg.

“It is a great honour to present the Excellence Award to an Association that since its foundation works towards strengthening the voice of the Hellenic Ship Managers at a global level on many subjects including the enhancement of environmentally friendly procedures in Ship Management. This award recognizes the Marine Technical Managers Association, known as MARTECMA, for its key involvement on how industry should tackle emissions by identifying the technical requirements of the various abatement technologies.”

“I am very pleased and proud to receive this year’s GREEN4SEA award for Excellence. I would also like to thank the organizers GREEN4SEA and the sponsors of this award Lloyd’s Register of Shipping for their great efforts in promoting improvement and excellence in our industry. Last but not least I would like to thank all those who voted. MARTECMA since its foundation back in 1998 has participated via its members to nearly all international shipping organizations and associations. Presently MARTECMA more than ever before is in the forefront of monitoring and following the regulatory developments in shipping that will shape the operational profile of the ships in the next decade and beyond.”

“I am very happy to have the opportunity to give the GREEN4SEA Dry Bulk Operator Award to a shipping company that has a strong presence in shipping worldwide, with long experience in safe and reliable transportation of dry cargoes.  Atlantic Bulk Carriers is a reputable company with very long history, that has always been sensitive both to environmental and safety issues. Atlantic Bulk Carriers is always in the forefront of Greek Shipping, investing in and operating young reliable ships, manned with well trained personnel of the highest standards.”

“We thank you for this great honour. Atlantic Bulk Carriers Management is a company that pays great attention to safety and environmental protection. On the environmental front, we apply one extra cylinder to our main engines, allowing the engine to operate at the optimum point of 75% MCR in real conditions of Beaufort 4-5, not at the calm sea trials. This action reduces fuel consumption and thus CO2 emissions by at least 7%. The bulbous bow shape that we indicated to a major shipyard building our vessels, saved another 7.5% in fuel consumption and has now been adopted as the yard’s standard bow for all their new ships, while our latest supramax ships, designed jointly with the shipyard, have probably the lowest fuel consumptions of any supramaxes built to date.”

Stena Bulk received the GREEN4SEA Tanker Operator Award for actively working on improving its annual energy efficiency by implementing continuous improvements to technical solutions, energy management, optimisation and individual energy budgets produced for each vessel before every trip. Other short-listed nominees for this category were: StealthGas, Teekay and Tsakos Columbia Shipmanagement.

“We are proud to be the ones giving this award to STENA BULK who is one of the world’s leading tanker operators promoting innovation and excellence. The world needs companies like STENA BULK because with their work with energy efficiency reduces the environmental footprint and contribute to a more sustainable shipping. More specifically the world knows STENA for pioneering the concept of propulsion redundancy and the introduction of the ecofuel methanol.”

“As both owner and operator, Stena Bulk is exposed to all areas of tanker shipping and thus has a twofold responsibility to be at the forefront of developments. We have long focused on technical development and have created solutions both on board and ashore that have raised awareness. But it has also been important to not only focus on technology for reducing bunker consumption but also to work with a commercial focus on using fuel more efficiently. Since it was implemented in 2012, our Energy Management system has increased our fuel efficiency by 20%; this is equivalent to 30,000 mt of fuel and savings of 100,000 mt as regards CO2 emissions. In recent years, our leading role when it comes to digital technology has taken us even further and we are currently working with tools that will enable us to predict the market in different ways. With new platforms, we are now transforming shipping as regards efficiency and transparency”

Capt. Dimitrios Mattheou received the GREEN4SEA Personality Award for his overall contribution to the Green Award Scheme since being appointed as Chairman. He has played an important role on adding more value for its stakeholders, expanding further the scheme and increasing the involvement of certificate holders and incentive providers. This was a special category award after consideration and review of a list of “Editor’s Pick” nominees by the GREEN4SEA Team.

“With great pride and honour, I would like to give this so well deserved prize to Dimitris Mattheou who is not only an excellent partner but also a friend. During our business career, there are a few – maybe a handful of encounters who stay as a precious memory and follow us for the rest of our lives. I am happy to say Dimitris is one of them. His appointment as Chairman of Green Awards Scheme and his passionate engagement was only proof of his commitment to excellence, his dedication to the goals set and his passion to serve the industry and preserve life and assets at sea. ”

“It is with great appreciation that I accept this award and I would like to thank GREEN4SEA for this honor. On December 2015, I was offered the honorable position of the President of the GREEN AWARD organization. Since then, many shipping companies and numerous industry-related organizations have become members. I look to the future with optimism and respect for the Green Award Foundation. My willingness and my continuous effort will be, to keep on serving and supporting consistently the maritime sector, to prove capable towards the ones who trust and invest on me and to motivate the younger ones”

Find more photos from the awards ceremony at Flickr