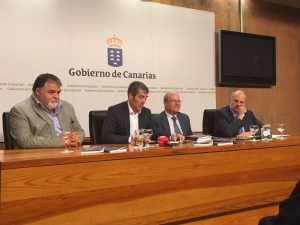 Capt. Antonio M. Padrón y Santiago, “IMO Maritime Ambassador” and Maritime Authority of Tenerife, participated in the presentation of the book “Special Registry of Ships and Shipping Companies of the Canary Islands”, by José Segura Clavell

In addition to his direct participation in the creation and development of the Second Spanish Registry, Mr. José Segura, former Member of the Spanish Parliament, was one of the precursors of the “Law of National Ports and Merchant Marine” as well as the “Law of Maritime Navigation”.

Among the responsibilities of Capt. Antonio M. Padrón as Maritime Authority, is included the management of the office in Tenerife of the Special Registry of Ships and Shipping Companies of the Canary Islands.

Capers and Panamaxes “lift” the markets amid another Geopolitical turmoil