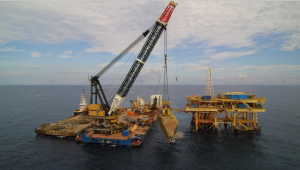 BAY OF CAMPECHE, Mexico (Nov. 15, 2016)- Ardent concluded the industry’s largest wreck
removal project in the Gulf of Mexico in 2016

HOUSTON, Texas (May 1, 2017) – Salvage and wreck removal company, Ardent, celebrates its second birthday with the passing of May 1, 2017.

Ardent maintains a zero lost time incident record since its inception.
“Despite the initial focus on implementing the merger and challenging market conditions Ardent has successfully won and executed 125 contracts over the last 2 years” said Ardent CEO Peter Pietka.

“Salvage operations are inherently risk filled and completing 125 contracts without a single lost time incident is a testament to the professionalism of our teams,” said Pietka.

In late April, 2017, Ardent signed for the removal of the sunken Fluvius Tamar vessel from the English Channel, the largest wreck removal contract awarded so far in 2017. “The new structure is intended to ensure that we for both business areas have ‘fit-for-purpose’ processes, resources and culture which will enable us to serve the respective customer segments even better than today,” explained Pietka.

The new structure also intends to secure that Ardent can retain its focus on its original core business while increasingly offering adjacent services – not least within an offshore context.

“Whereas we have done well in the market place it is also true that over the past two years, a tremendous amount of focus has gone into internal issues related to the merger implementation and the recent organizational restructuring. We look forward to the next stage,” said Pietka.

Ardent celebrates its second birthday, with zero lost time incidents with the passing of May 1,
2017. (Photo: U.S. Coast Guard)