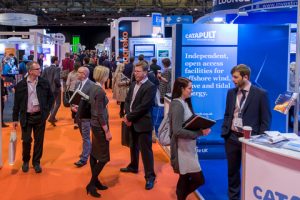 Offshore wind has played an important role at All-Energy, the UK’s largest renewable and low carbon energy exhibition and conference, since the first event in the annual series was staged in 2001. This year is no exception for over 15.5 hours will be devoted to offshore wind in the conference and seminar programmes; and well over a hundred exhibiting companies have opted to be on either the offshore wind (83 companies) or offshore maintenance (41 companies) trails around the exhibition.

All-Energy 2017 is being held Wednesday 10 and Thursday 11 May at the Scottish Event Campus (SEC – formerly SECC). There is free entry for all with relevant business/ professional interests to the major exhibition with up to 400 exhibiting companies from 16 countries; the world class conference with 400+/- speakers from home and overseas; and the programme of associated events including the Giant Networking Evening and Civic Reception held courtesy of the Rt Hon The Lord Provost of Glasgow.

Following the opening plenary session in which Scotland’s First Minister, Nicola Sturgeon MSP, will deliver a keynote address and other luminaries in the session chaired by Prof Sir Jim McDonald, Principal and Vice Chancellor of the University of Strathclyde, include Keith Anderson, Chief Corporate Officer, ScottishPower and Chief Executive Officer, ScottishPower Renewables; Prof Jim Watson, Director, UK Energy Research Centre (UKERC) and Julian Leslie, Head of Electricity Network Development, National Grid, four 90-minute offshore wind conference sessions will be held on 10 May, and a further three on 11 May when the Offshore Wind Quick Fire Seminar Theatre will also be in operation.

Three more offshore wind sessions follow. The first is ‘The importance of the supply chain’ (which links directly with the ‘Meet the Buyers’ Share Fair when prospective suppliers can meet with key players amongst the ‘buying community’ such as the Neart na Gaoithe and East Anglia ONE offshore wind farms) also considers the role of the offshore oil and gas industry in the rapidly developing global offshore wind sector. Next comes the ‘Offshore wind trajectory’ which again looks at lowering costs as well as bringing in speakers with experience of the offshore wind industry in Taiwan and the USA. Coincidentally the session ‘International Cooperation on Renewable Energy Projects in Taiwan’, being held at All-Energy, features a presentation on ‘The development of offshore wind power and marine energy in Taiwan’.

During the first day of All-Energy Marine Scotland will also stage its now traditional conference session on ‘Offshore renewable energy in Scottish waters – planning, licensing and science for the present and future’.

Day 2 not only sees a packed session on ‘Floating wind’ – topical thanks to activity off Scotland and recent Scottish announcements; and sessions on ‘Innovation’; and ‘Cabling: the critical link’ (with news of new developments as well as ‘what if….’ bringing in both insurance and finance experts) in the main conference; but also a five hour programme in the Offshore Wind Quick Fire Seminar Theatre on the exhibition show floor involving over 20 speakers.

All-Energy is organised by Reed Exhibitions. Shepherd and Wedderburn is the Headline Sponsor, and the two-day event is held in association with the Renewable Energy Association (REA); Highlands and Islands Enterprise; Scottish Enterprise; Aberdeen Renewable Energy Group (AREG) and host city Glasgow. The Society for Underwater Technology is the show’s learned society patron. A further 40 organisations including government departments, professional bodies and trade associations act as supporters of the two-day annual event.

Multiclient Geophysical to be delisted from Oslo Axess