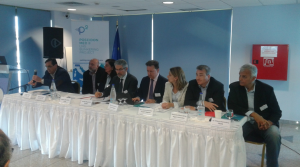 The benefits of the use of LNG as a safe and eco-friendly fuel for the local community of Patras, was the core of the discussion during the Poseidon Med II event which took place at Port of Patras on 19th June 2017. The event was co-organised by Patras Port Authority, which is one of the participating ports in the project, within the European co-funded Poseidon Med II project. The event gathered together representatives from the Municipality of Patras and local stakeholders from social and industry sectors.

The scope of the event was to offer a platform of discussion with local stakeholders focusing on the deployment of LNG as an alternative marine fuel and its key envisaged impact on the protection of the environment and on sustainable energy development at Western Greece.  During the meeting, specific emphasis was given to the LNG bunkering installations in Patras Port which are designed within Poseidon Med II framework, as well as to safety aspects and global best practices and case-studies. Additionally, the monitoring of air emissions in ports and the establishment of Revithoussa terminal as LNG hub for the regional supply chain were also highlighted. 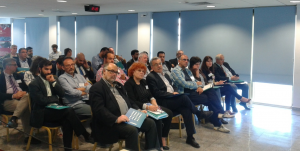 Nikos Kontoes, President & Managing Director of Patras Port Authority, noted: “Patras Port Authority sets as high priority the LNG establishment in port. At initial stage, it will accommodate LNG bunkering operations, expandable for industrial and domestic use. Within Poseidon Med II, the installation is designed in full alignment with the strict provisions of SEVESO Directive. This LNG unit will contribute to the sustainable development for the port of Patras, linking the currently isolated Western Greece with energy networks.  Social-economic development and employment are among the key benefits for Western Greece, which is the third poorest region in Greece, as well as the environmental protection for the port of Patras and the wider area”.

Similar events raising awareness about the prospects of the LNG as marine fuel will take place at other ports participating to Poseidon Med II project the following months.