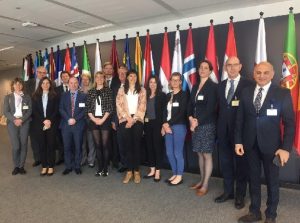 From the Warsaw meeting

ECSA’s Maritime Security Working Group recently had an exchange of views with the European Border and Coast Guard Agency in Warsaw on maritime security issues. The Shipping industry is directly affected by challenges, such as migrants at sea.  Whereas the number of migrants rescued from the sea has gone down from the peak-year of 2015, merchant vessels are still often involved in the Search and Rescue (SAR) operations in central, western and eastern Mediterranean.

Concerning the “Operation Triton” of the European Border and Coast Guard Agency, in 2016, out of all 1629 incidents, 4% involved merchant vessels assistance while in 2017 out of 470 so far the share is 12%. The European Border and Coast Guard Agency’s activities have intensified and its tasks increased, and the operational concept of its Maritime Operations is related to the early detection of migrants, contribution to the SAR operation and detection of other cross border crime activities. Migration remains one of the biggest operational activities in 2017.

“Often, merchant ships are the first to assist with the rescue of migrants.  In accordance with international conventions, our Captains have a legal obligation to help people in distress at sea, and we will of course honour these commitments when needed. However, commercial ships are not equipped neither are the crews trained to undertake large-scale rescues. Therefore, commercial ships should not become a permanent part of the solution to this problem, the scale of which appear to grow proportionally to the availability of rescue platforms at sea. Within the international legal framework, other and more comprehensive solutions should be considered. For example addressing the root causes of the problem, removing the migrants’ incentive to migrate, and containing the problem to the shores” the Chairman of ECSA’s Maritime Security Working Group, Mr. Jakob Paaske Larsen,said.

’”We appreciate to a great extent and are impressed by all the work and operations undertaken by the European Border and Coast Guard Agency on search and rescue operations. The added value of its ongoing operations is important and has ameliorated the pressure on the merchant fleet to a big extent’’ he concluded.

Mr Georgios Vourekas, Head of Sea Border Sector at the Joint Operations Unit underlined that the European Border and Coast Guard Agency is aware of the impact the high number of search and rescue operations has on the merchant vessels involved and said that it is ready to debate with all partners in order to find a solution for these challenges.