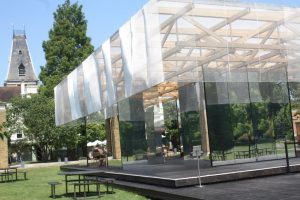 Dulwich Picture Gallery is celebrating 200 years since it opened to the public with a lively programme of activity centred on its new pavilion, which opened on June 2 2017, serendipitously just ahead of an unexpected London heatwave.

The Dulwich Pavilion has a practical purpose, giving the gallery much-needed extra space at least for the summer and early autumn, for the number of visitors is growing. To this is added elegant design, an opportunity for extra arts-related entertainment – and desperately-needed shade on warm days. 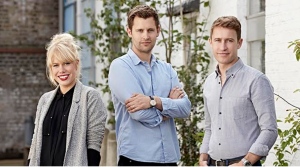 It will rival the better-known Serpentine Gallery pavilion, which in various guises has embellished Kensington Gardens for the past 17 seasons. While it is likely to fall short of the 250,000 visitors that the Serpentine structure drew in 2016, the Dulwich pavilion is sure to win the affection of many thousands who will gaze admiringly, stroll through it or stop for a coffee or something stronger.

Its themed evenings of free ‘Friday Lates’ in June and July include performance, talks and music, with experts from across the art and design world.

To mark the bicentenary of the gallery, the first in the UK conceived to give public access to art, and the world’s first purpose-built public gallery, visitors are enjoying free entry to the permanent collection every Friday from 6pm-10pm. 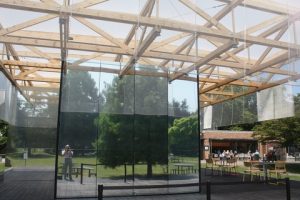 The temporary pavilion, designed by south London-based architects IF_DO, features light timbering and a series of mirrored screens, reflecting the architecture of the gallery and the pleasant gardens around it.

A long bar, built into one end of the frame, is open throughout the weekend with extended hours on Fridays and Sundays. It offers a special drinks list and serves a sharing menu devised by Mike Davies, head chef of the Camberwell Arms.

From the gallery, events producer Jenna Mason said: “The pavilion’s moveable panels have allowed us to programme a range of immersive activities and thought-provoking debate from experts in the field of art and design.  We’ll also be bringing events into the inspiring setting of the permanent collection where visitors will see the old masters in a whole new way – and hopefully leave with their curiosity fed!”

The Dulwich Pavilion was developed in partnership with the London Festival of Architecture and property developer Almacantar with additional support from Arts Council England. Almacantar specialises in large-scale, complex investments and owns over 1.5m sq ft of assets including Centre Point, Marble Arch Place, CAA House, One and Two Southbank Place and 125 Shaftesbury Avenue.

The Lates programme is touchingly supported in tribute to Ingrid Beazley, chairman of the Friends of Dulwich Picture Gallery from 2005-2008, and founder of the street art project Dulwich Outdoor Gallery, who died aged 67 in April 2017. Ms Beazley is remembered for her magnificent role in supporting international education in the arts, and stimulating involvement with the community. 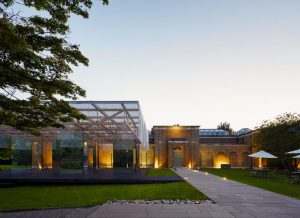 The Friday series will include Choreographing the Collection, on July 14, “a danced tour of Dulwich Picture Gallery, retracing the footsteps of the millions of visitors who have crossed our threshold over 200 years.” This is created by choreographer Katie Green in collaboration with curator Helen Hillyard.

The following Friday, July 21, will see a performance entitled Sargent: Wanderlust, in which the roamings of John Singer Sargent “will be brought to life through Art Macabre’s immersive drawing salons, where costumed models will evoke Sargent’s international travels with theatricality and curiosity.” In the gallery gardens, storyteller Giles Abbott will “conjure pictures in your mind inspired by the watercolours of Sargent.”

Then on July 28, the theme is Bloom: “Enjoy the gallery gardens by twilight, as we take inspiration from the collection’s rich floral works for this botanical themed evening. Come prepared for flower workshops, infused cocktails and plenty of green-fingered creativity. Courtesy of Flower Show Presents, you’ll have the chance to make and adorn yourself with floral designs inspired by Jan van Huysum’s Vase with Flowers (1715).”

The new pavilion is “a contemporary response to John Soane’s original architecture and the gallery’s surrounding grounds.”

Sir John Soane (1753 – 1837) built the Bank of England and the gallery, as well as his own home rebuilt from three houses in Lincoln’s Inn Fields and which as a museum welcomes 100,000 visitors a year.

The pavilion design results from a competition among emerging architects won by the IF_DO partnership with its design, After Image. Based in Camberwell, the practice was established in 2014 by Al Scott, Sarah Castle and Thomas Bryans. 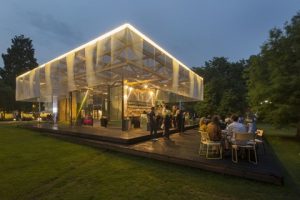 Their design, called After Image, “responds to the solidity and monolithic nature of Soane’s gallery building, and the porous, ever-changing nature of the landscape. A series of translucent mirrored screens – some fixed, some moveable – reflect and disrupt the context. The lightweight structure also features a timber truss roof overlaid with a mesh veil to create a canopy-like environment that enhances the layering of images and the interplay of space, perception and memory.”

Mr Scott of IF_DO said: “Blurring the boundary between gallery and landscape, the pavilion creates a heightened sensory experience through a series of unfolding, translucent mirrored screens, inspired by the work of Sir John Soane.”

His firm overcame competition among 75 entries, having been shortlisted alongside Feilden Clegg Bradley Studios, Pernilla Ohrstedt and a collaboration between Tom Benton Architects, Hayatsu Architects and MJ Wells.

Panel member Carl Turner said: “Simple but sophisticated, edgy but engaging, IF_DO’s pavilion has many layers, but most importantly is conceived as an attractor for a new audience, designed to reach out to a wider public helped all the more that the practice are based in neighbouring Camberwell.’

Mr Dejardin added: “I am delighted to be able to report that emerging talent in architecture is flourishing – this was no easy choice. IF_DO dazzled, however, with their thoughtful, thought-provoking concept, harmonising in subtle ways with Sir John Soane and his great building, playing games with image and reflection, evoking the loveliness of the garden and its trees. Children will want to play in it; adults will want to stop and think; performers will revel in it.”

The London Festival of Architecture is the world’s largest annual architecture festival, with a programme that promotes the city as a global architectural hub.

The pavilion will be open until October 8. More information at www.dulwichpicturegallery.org.uk