Tasting Georgia: A Food and Wine Journey in the Caucasus by gourmet Carla Capalbo

After Alexander the Great swept into what is now the Republic of Georgia, he is reported to have ordered the destruction of Khertvisi, one of Georgia’s most spectacular fortresses.

It is unknown whether he took time to taste the local cuisine and delicious wine, but to judge from a new book, had he done so the warrior-king of ancient Macedon (356-323 BC) might have been tempted to settle down on the spot, and enjoy in peace the fruits of his conquest. 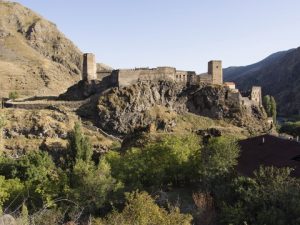 Tasting Georgia: A Food and Wine Journey in the Caucasus, written by Carla Capalbo and illustrated with her own superb photographs, amounts to an irresistible invitation to eat and sup what the small nation has to offer.

Alexander came upon the city-fortress of Khertvisi in the Samtskhe-Javakheti region on his march to the east.  Its name comes from a word meaning the confluence of two rivers. The complex would in succeeding centuries be rebuilt, and well preserved remains from the 10th to the 19th century can be visited today.

At least the young Alexander must have marvelled at the topography, for in Greek the Caucasus mountains were one of the pillars on which the world rests. 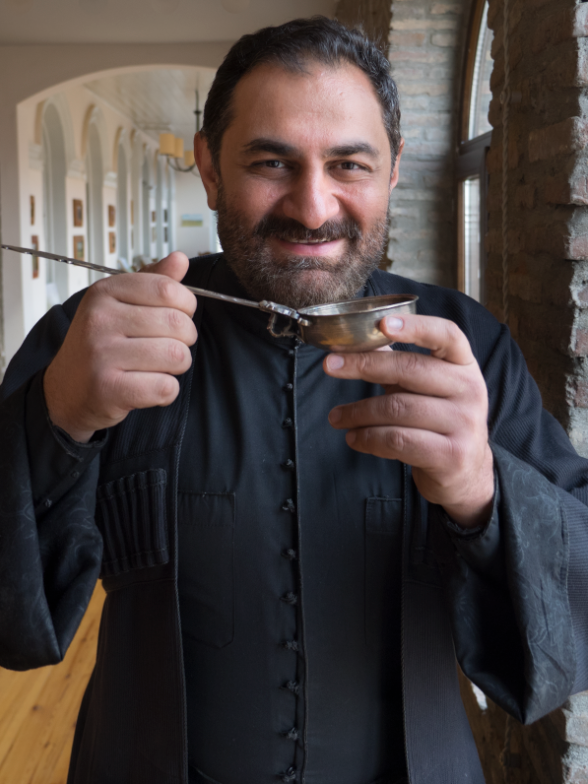 Carla Capalbo finds the terrain exciting, but even more so the comestibles. In her preface to the book, the author writes: “Like many wine lovers, I first visited Georgia to understand more about its ancient winemaking culture. I soon discovered that Georgia’s unique food and hospitality are as exciting as its wine. The warmth and generosity of Georgia’s people captivated me, as did its physical beauty.”

The book springs from her extensive travels through the country, visiting restaurant chefs and home cooks, natural winemakers and qvevri potters, cheesemakers and other producers of Georgia’s distinctive foods, listening to their stories and collecting their recipes. The qvevri are handmade large terracotta pots in which wines are fermented, stored and aged, then buried in the ground – and the tradition is the inspiration behind one strand of the current ‘natural’ wine movement. 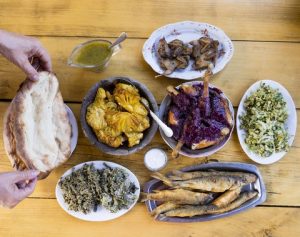 This is the latest of 12 food and wine books written by Carla Capalbo, who contributes regularly to publications on both sides of the Atlantic, including Decanter, ZesterDaily, BBC Olive and Cook_Inc magazine.

René Redzepi, chef and co-owner of the renowned Noma Restaurant, Copenhagen, has said that the book “shows the world perhaps one of the last undiscovered great food cultures of Europe.”

Tasting Georgia should whet the appetite of both those who want to visit Georgia – flight time London to Tbilisi could be as little as four hours 40 minutes – and those who prefer to explore a new country from the armchair. It includes 70 authentic recipes, so that readers can have a go at mastering Georgian cooking. Enviably, for her research Carla visited over 40 wineries and 65 restaurants, wine bars and cooks.

Her fine images of people, food and stunning landscapes illustrate why she has found this country between the Caucasus Mountains and the Black Sea irresistible, and why it is becoming a magnet for tourists seeking new destinations. 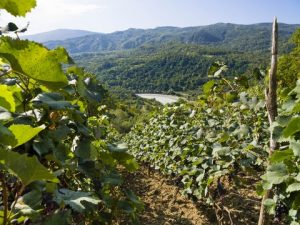 Georgia’s winemaking tradition has been unbroken for more than 8,000 years and boasts over 500 native grape varieties. Families throughout the country make ‘orange’ wines in qvevri and the writer interviews people in the know at small farms and bigger châteaux where wine lovers can holiday as they explore the countryside.

The author says that Georgian food is a fantastic mix of the familiar and the exotic. “The colourful, delicious recipes use handfuls of fresh herbs, delicate spicing of marigold and fenugreek, ground walnuts and seasonal vegetables to produce the sharing dishes that fit so well into our modern lifestyle.

“Khachapuri – the iconic national cheese-filled bread – is as moreish as pizza and is one of the next great food trends”, she predicts.

The Georgian supra, or feast, is punctuated by toasts given by an informally appointed toastmaster, known as a tamada. These occasions are filled with joy, songs and companionship.

Carla’s food and wine writing is complemented by her descriptions of the country’s rich culture and tempestuous history. She has spent several years travelling through Georgia meeting its gastronomic heroes.

In her preface, she writes: “Despite having its own language and history, Georgia is an agricultural country and the small family farms, with their mixed crops, animals and vineyards, remind me of a way of life that has all but disappeared in many places.” 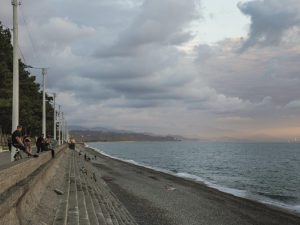 Stormy sky over the Black Sea at Kobuleti.

Her journey includes the fascinating city of Tbilisi with its historic and modern cutting-edge architecture and lively food scene; the bustling markets of Kutaisi and Telavi; and the mountain villages of Svaneti and Kazbegi, which are ideal for horse-riding, hiking and winter sports.

Carla Capalbo was born in New York City to a theatrical family and grew up in London and Paris. She lived in Italy for over 20 years, working as the Milan design correspondent for Vogue Décoration before writing her first Italian cookbook. Her spirit of adventure led her to write three personal and detailed guides to the food and wine culture of Italy. The most recent, Collio: Fine Wines and Foods from Italy’s North-east won the prestigious André Simon Memorial Award for Best Wine Book.

With a photo from Tasting Georgia, she won the International Association of Culinary Professionals’ Culinary Trust Award 2016 for Food Photography that Makes a Difference. She is a longstanding member of the British Guild of Food Writers, the Circle of Wine Writers and of Slow Food. 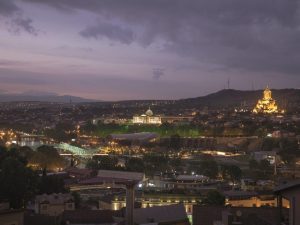 The book, which includes 70 authentic recipes and 400 photographs of Georgian people, magnificent landscapes and colourful food, is out from London-based Pallas Athene which has been publishing books for 25 years, starting with travel guides and now mainly focused on art and with wine and food titles.

Another testimonial has come from Carlo Petrini, founder and president of the Slow Food Movement: “Agricultural and food biodiversity are fundamental resources for our survival on this planet and we all need to protect them. Carla Capalbo has long played her part through her food writing. She’s doing it again here, in this detailed and colourful book about Georgia. With characteristic empathy and engagement, she’s documented Georgia’s unique gastronomic traditions and the people who have fought so hard to preserve them.”

All photos in this article are by Carla Capalbo.

Tasting Georgia: A Food and Wine Journey in the Caucasus, written and with photography by Carla Capalbo, is published in hardback with 460 pages, price £30, by Pallas Athene. ISBN: 978 1 84368 125 0 www.pallasathene.co.uk