Light and shifty winds continued today over Kiel Bay as Finals action began for the top of the Olympic 49er and 49erFX fleets, while the foiling Nacra 17 knocked off three more races in their first-ever regatta in the Olympic multihull’s new flying configuration.

Locally-based teams took advantage of their knowledge of Kiel’s tricky summer conditions to jump ahead in the standings, with Jakob MEGGENDORFER and Andreas SPRANGER winning the day in the 49er Class with a 1,9,3 and vaulting ahead to 5th place in the ultra-competitive Gold fleet.  The Kiel-based crew – both just 21 years old – have been preparing for their run at the Olympic 49er fleet for some time: in 2010, they became German National Champions in the 29er and six years later they won the Bronze Medal at the Junior Sailing World Cup, and if today’s sailing is any indication, German skiff racing has a bright future indeed.

Dylan FLETCHER-SCOTT and Stuart BITHELL may have led the field every day since the beginning of the European Championship, but today their proverbial wheels fell quite a long way off the bus, with collisions and equipment issues plaguing the top British duo as they saw their position slip from first overnight to 8thafter the challenging 3-race day.  Fletcher-Scott said it was a prang with his own training partners that caused most of the damage during an upwind/downwind collision in the first race of the day.
“We were shouting at a group of boats that had already rounded the top gate and were headed downwind on Port, but none of them seemed to hear us at all,” said Fletcher-Scott, whose next view was of the wing of squadmates PETERS and STERRITT as it crashed into Scott’s own wing.  As they sorted out the damaged wing and trapeze, another port-gybe boat decided to say ‘hello’, but at least this time it wasn’t their closer friends: Federico ALONSO and Arturo ALONSO’s carbon fiber bowsprit would have plunged right through Scott’s boat or sail if not for his musclebound crew’s reaction; Bithell grabbed the pole, stopped its forward motion, and shoved it away before any further damage could be done.  “He may have went into a bit of a rage – thankfully,” said Fletcher-Scott.  The English duo dug back into the fleet during the next race only to see yet another equipment issue – this time a knotted halyard – knock them back 6 places.  “Some days, literally nothing goes your way,” Fletcher-Scott said, adding that he’s still just ten points out of 2nd place despite Wednesday’s chaotic day.  “We’re confident we can get back into it, and we’re excited to go play in some real breeze tomorrow.” 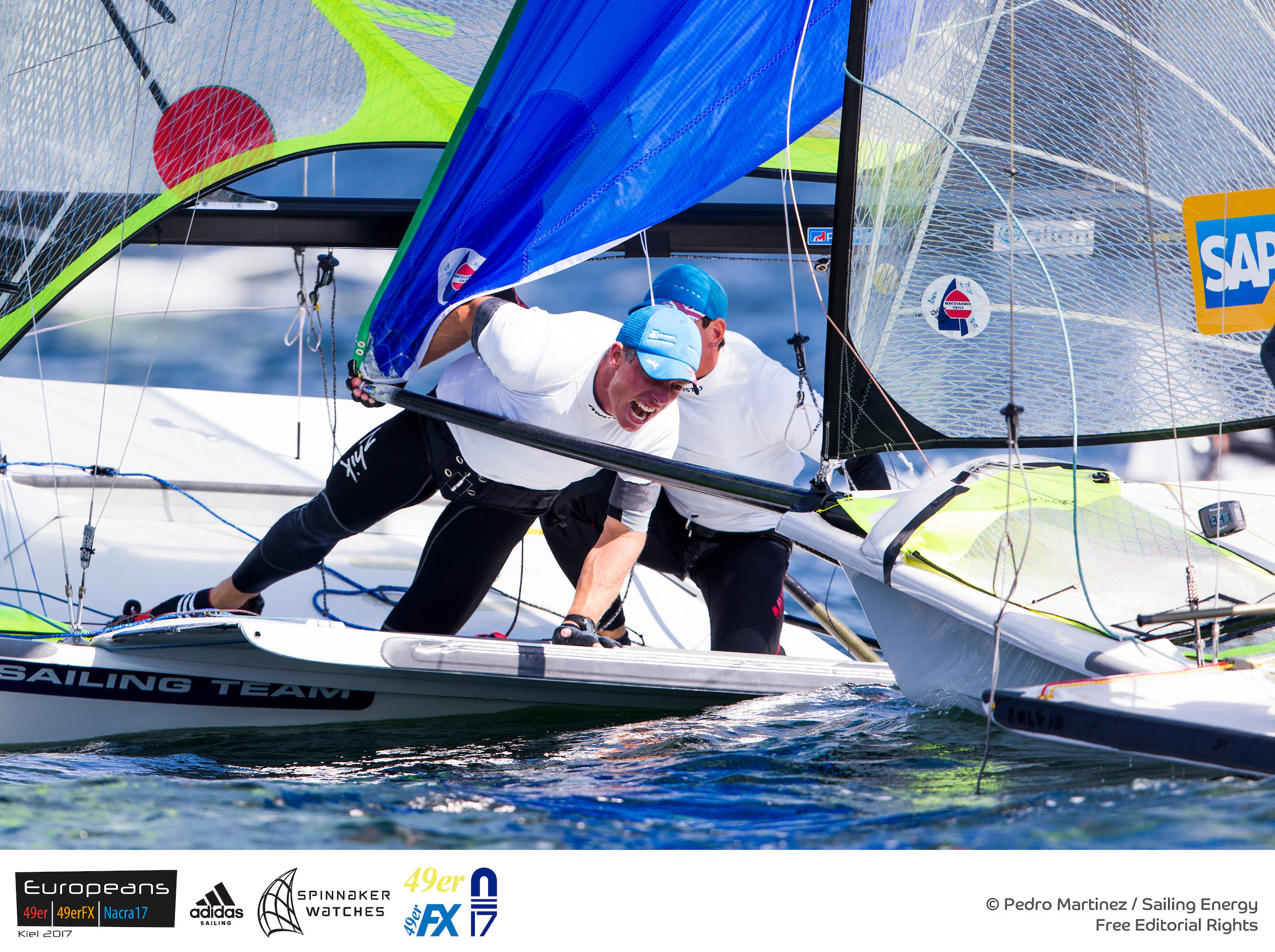 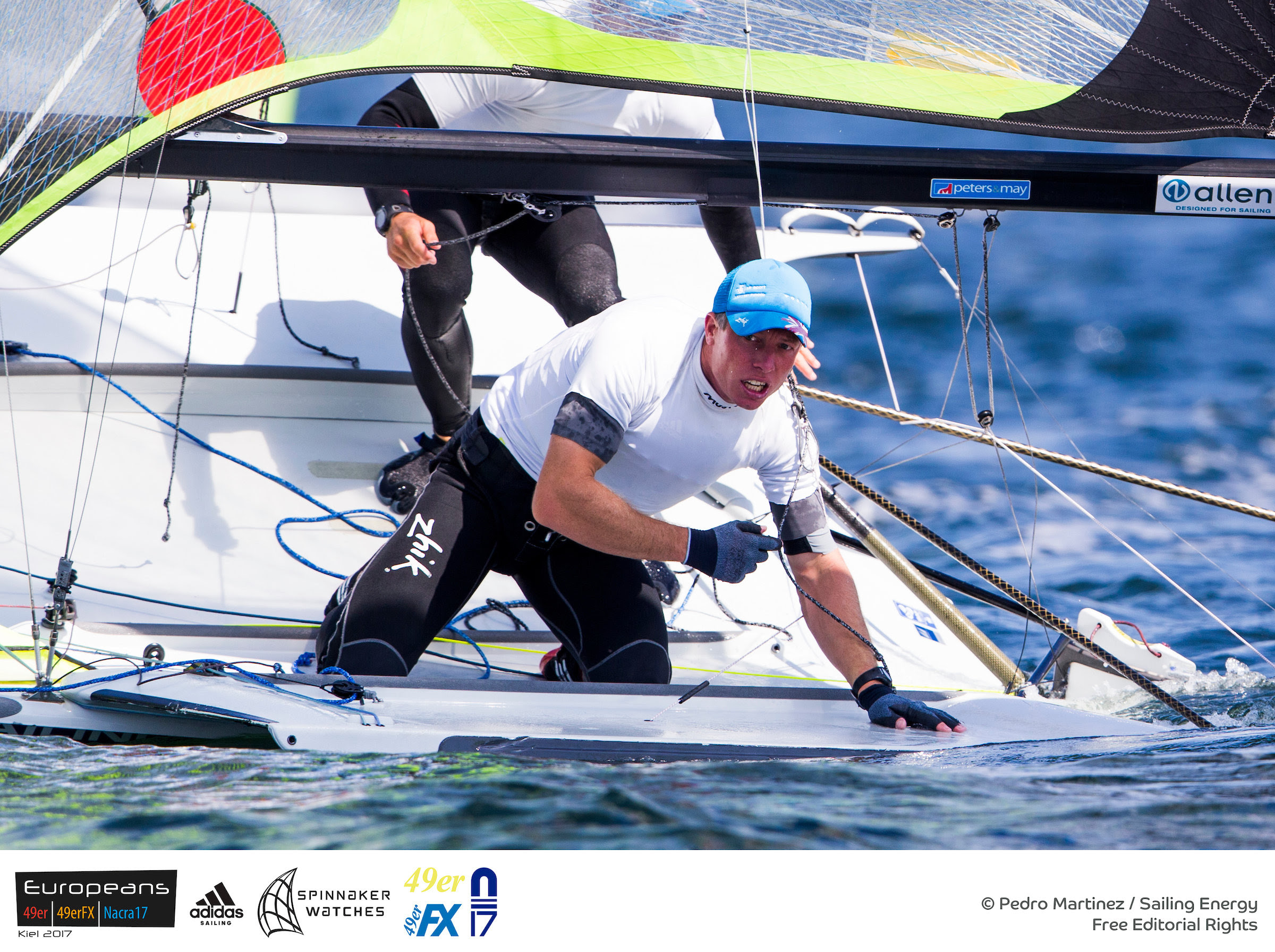 Two German 49erFX teams played the shifty-three race day to perfection as well as their 49er squadmates, with Kiel-born crew Susan “The Kiel Sprat” BEUKE and Tina LUTZ continuing their strong performance from yesterday.  The top German duo in the fleet consistently sailed less distance than their competition in the shifty Southwesterly breeze, jumping another position to 2nd after the first day of Finals racing and sitting just a point behind Rio medalists Jena HANSEN and Katja IVERSEN. Rio Olympians Victoria JURCZOK and Anika LORENZ aren’t about to let Beuke and Lutz take their crown as top Germans – they took an emphatic bullet in the last race of the day to pull within 3 points of their training partners.

Overnight leaders Annemiek BEKKERING Cecile JANMAAT saw huge swings in their performance after a blistering first race today that saw them take an easy victory. The Dutch duo couldn’t seem to get their starts right after that, and seemed unable to claw back through the fleet with their usual smoothness.  They stand in 5thplace. 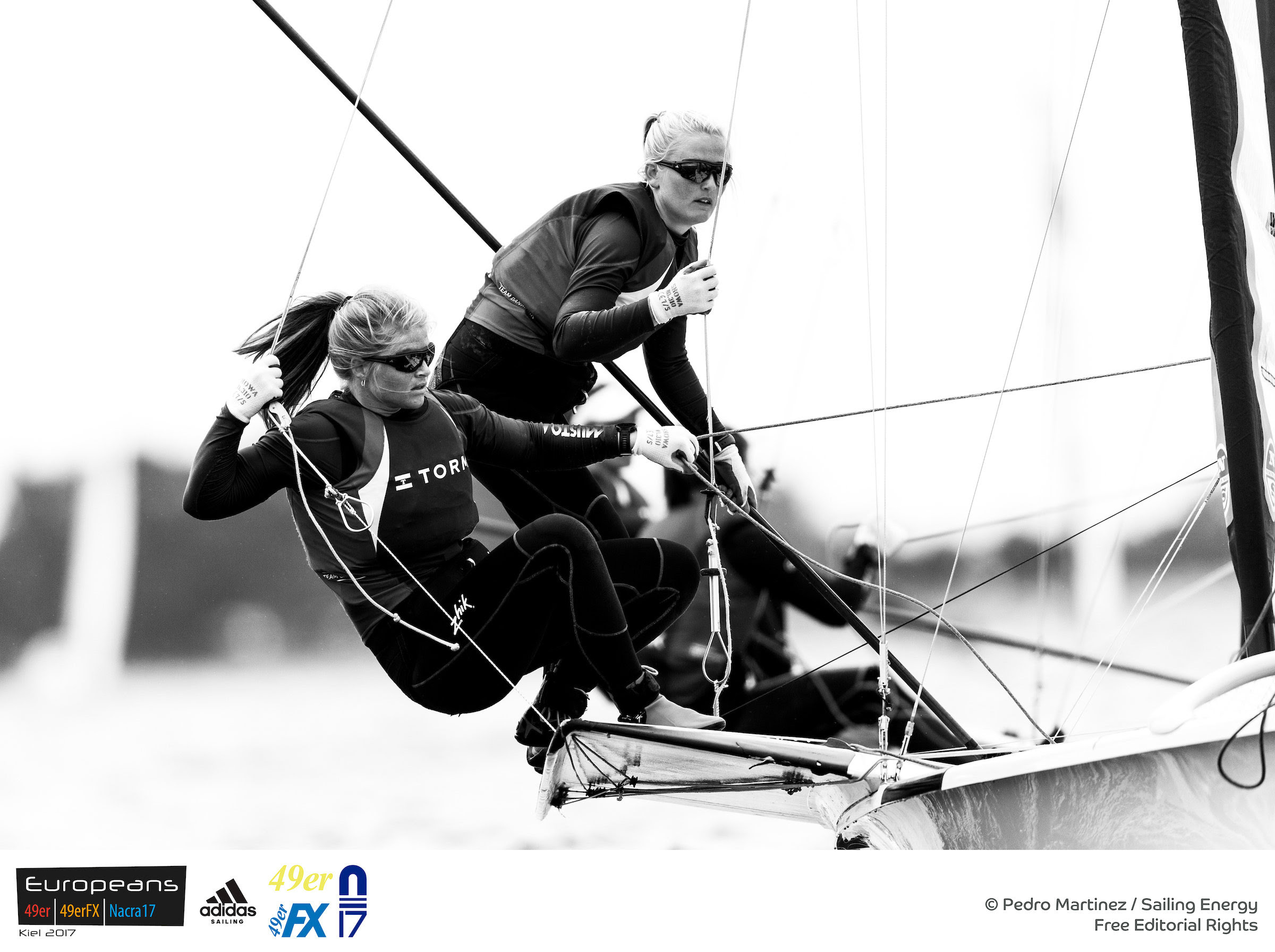 Japanese athletes are already showing that Tokyo 2020 is on their mind, with two FX teams in the top 13 after today’s racing and Chika HATAE and Hiroka ITAKURA easily winning the day in the FX Gold fleet with a 6,1,4 scoreline.  While their heavy-air prowess hasn’t been quite as solid as their light air chops, the pair’s ability to capitalize on mistakes and put pressure on their competition was evident throughout today’s racing.
Ruggero TITA and Caterina BANTI continued their consistent ways in the Nacra 17 fleet, taking the lead during a wildly shifty day for the near-shore course.  With the fleet alternating between upwind spinnakers and upwind jibs only, the Italian duo sailed a conservative day to take first position going into the decidedly breezy Thursday ahead of them.

The most incredible moment of the week came on the Nacra course today, when Finnish crew Janne JARVINEN disappeared into the water just before the leeward mark of the first race.  With his helmeted head bobbing in the waves and foils slicing through the water around him, Race Officer John Craig was worried. “The leeward mark isn’t a great place to go swimming when foilers are around, and our emergency crews immediately jumped into action to retrieve the Finn, but none of the rescue boats had a clear path to the crew,” said Craig.

Before any powerboat could answer the emergency, quick-thinking Finnish skipper Sinem KURTBAY leapt into action.  She jumped to the spinnaker retrieval line, dropped the kite, rounded the bottom gate, and tacked – all while keeping an eye on her crew’s helmet.  “I wasn’t really worried about him even though maybe I should have been; I just knew I needed to get back to him as soon as possible,” said KURTBAY, who slowed the boat down to less than 2 knots while Jarvinen pulled himself back on deck.  The funniest part about the whole thing was my solo rounding – it was really a good one!” she said.  Kurtbay said that despite the great rounding, she would be taking Jarvinen with her tomorrow… didn’t loose a position.
Live coverage of the Gold Fleet racing begins tomorrow at 1100 CET, with aerial and on-water video with professional commentary from sailing journalist Alan Block and former Olympic 49er sailors Ben Remocker and Marcus Baur, live tracking and graphics, and special guests.  Tune in to Facebook for all the action, and find live notifications via our alerts if you sign up. 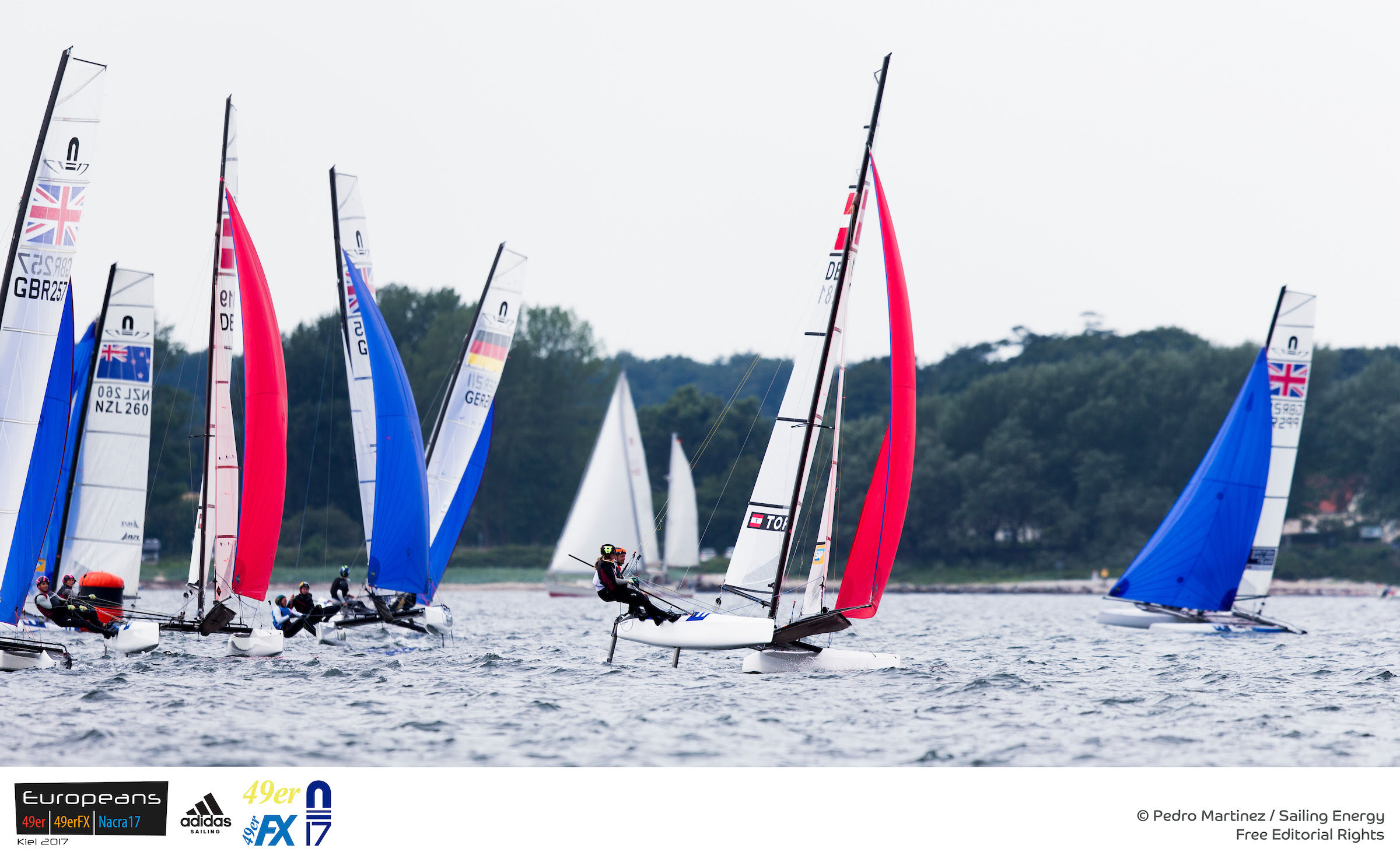