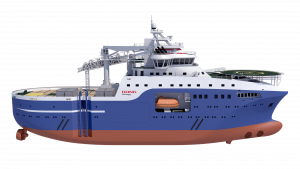 ABB will optimize the safety and environmental credentials of a new Louis Dreyfus Armateurs wind farm Service Operation Vessel (SOV) by installing Onboard DC Grid power distribution to enable the cost-efficient integration of batteries. As an integral part of the power system, the Power and Energy Management System (PEMS) will ensure safe and efficient operation of the vessel.  The hybrid system enables lean operation with fewer running generators without compromising on safety, meaning less maintenance and better fuel consumption over the long-term.

“Shipping is waking up to the many advantages of energy storage,” said Juha Koskela, Managing Director of ABB’s marine and ports business. “With the industry starting to use batteries more and more, and fuel cells becoming a viable option, we fully expect the Onboard DC Grid to gain further traction.”

The Onboard DC Grid will integrate two sets of batteries used primarily for spinning reserve and peak shaving. Power peaks during operation can be covered by the battery rather than starting another engine. Again, battery power can act as backup for running generators, reducing the need to run spare generator capacity. In addition to ship efficiency gains, the mode of operation has long-term benefits for ship engines, as it increases efficiency through higher engine load and reduces running hours overall.

The Onboard DC Grid has been installed on a wide range of vessels including ferries, OSVs and a cable layer.

“This project shows how energy storage is a cost-effective solution that maximize energy efficiency and safety,” said John Olav Lindtjørn, Global Product Manager for Onboard DC Grid at ABB Marine & Ports. “Energy storage can be used for many purposes onboard; sometimes it serves as the sole energy source but for this windfarm vessel it is being deployed as an effective supporting element for the main engine.”

The whole power system is controlled by integrated PEMS, enabling the generators to run at variable speeds and charge the batteries in the optimal way while at the same time maximizing safety and efficiency. This contrasts with traditional AC systems, where generators run at fixed maximum speed irrespective of the power demand onboard, leading to excessive engine wear and poor fuel efficiency at lower loads. The ship’s crew of up to ninety will also benefit of the reduced vibrations.

The Louis Dreyfus Armateurs ship will be built by Cemre Shipyard in Turkey. The vessel design is a SOV vessel by Salt Ship Design. The SOV will operate on four wind farms off the German coast, enabling the maintenance of the turbines by wind farm technicians.