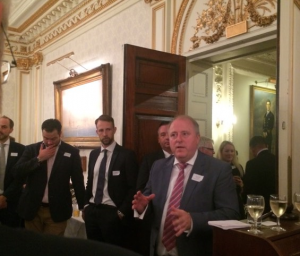 The London Propeller Club and Liverpool and North-West Propeller Club co-hosted a successful reception earlier on tonight at the historic, grandly appointed premises of the Naval Club in Mayfair, during London International Shipping Week, LISW 2017; Anna Kaparaki was there and she reports:

It was a noteworthy event thanks to the quality and commendable diversity of its attendees, and all the more so because of what the gathering heard of the agonising predicament of an anti-piracy team who are tangled up in the slow-moving Indian legal system. 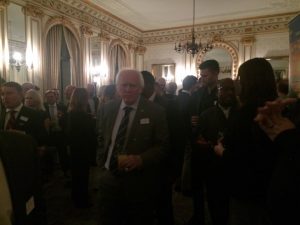 This is what we call a full house!

The atmosphere became highly emotional as Lisa Dunn took the podium to tell of the distressing plight of her brother, a veteran of the Parachute Regiment of the British forces.

Ms Dunn related the story in full to All About Shipping: “In October 2013, my brother Nick Dunn along with six British veterans were conducting anti-piracy operations in the Indian Ocean. The whole crew of 35 on board were called into the port of Tuticorin off the southern coast of India. This is routine to verify paperwork and ensure all is in order. The weapons on board were declared to the coastguard; however the men were then arrested for entering Indian waters with the firearms. 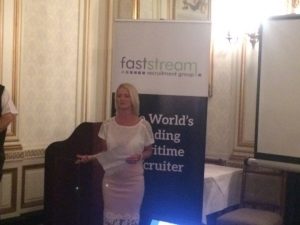 “The British Government issued the very licences that the Indian authorities claim are unlicensed. The crew and guards were in prison for six months, released on bail, then all charges were dropped as there was no evidence to suggest any wrongdoing.

“The police appealed, which resulted in a trial but the men had to remain in India as innocent men until the trial came to court. In January 2016, all 35 men no matter what their role on board were sentenced to five years of rigorous imprisonment. An appeal against this decision was submitted and this was heard in court in November 2016.” 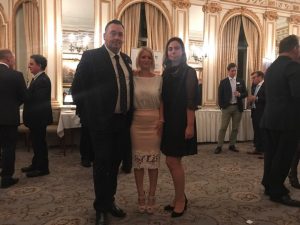 The judge reserved his verdict to a later date. “As per Indian law,” continued Ms Dunn, “a verdict from an appeal is to be issued within three months; however we are still waiting for this decision some nine months later.  The British Government continually state they cannot get involved in another country’s judicial process, but it is more than apparent now that this judicial system is failing.

“This situation has been nothing short of utter despair for four very long years. Our lives have been turned upside down beyond belief in ways that you would never even think could happen in real life. There are no words powerful enough to describe the rollercoaster of emotions that we have gone through and are still going through, no words that come anywhere close to justifying the true enormity of it all. 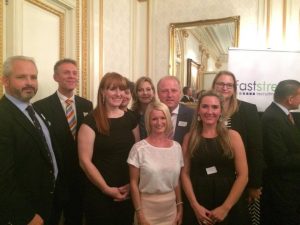 Evidently, all sectors of the Shipping cluster are represented…

“Our brave veterans are being wrongfully punished right now in a prison cell in barbaric and inhumane conditions. There really is no point to this. It’s tearing apart people’s lives. We are extremely grateful to the maritime community for their continuous support as this genuinely does help us cope, which in turn helps the men cope day by day.”

The president of London Propeller Club Cdr Ian Millen and president of Liverpool & North -West Propeller Club Steven Jones offered the warmest hospitality to all members and friends of the two clubs.  Attendees had a great opportunity to mingle, network and discuss the problem of piracy and many other key issues. 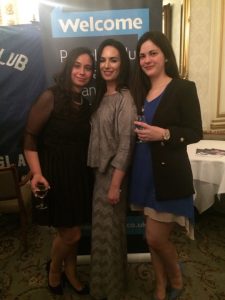 It is noted by both presidents that this is only the beginning of a close collaboration between the two clubs to develop further their activities.

Capers’ volatility continues as the BDI falls. @1,344 caution is the only remedy…