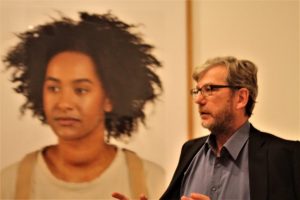 To many who were born in the middle of the last century, it became clear as 1984 approached that Big Brother really was watching you.

Anyone who had read or heard of Nineteen Eighty-Four, a novel by George Orwell published in 1949, was scarily aware of the controlling and monitoring of populations it forecast, and of its ominous slogan of a nominally caring but creepy Big Brother. This figure was watching you via what Orwell called telescreens, the precursor of closed circuit television and similar spy technologies. 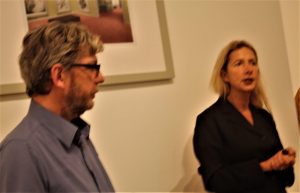 Thomas Ruff, who was born in 1958 in a small town near the Black Forest and studied art at a leading academy in Düsseldorf, recalls that having read the novel by Orwell, he and many others of his generation were wondering: “How would Big Brother show up? Of course, Big Brother showed in surveillance cameras and in Germany the activity of the Rote Armee Fraktion [a terrorist group known internationally as the Baader-Meinhof Gang] led to a lot of controls and passport checking etc.”

The technology and imagery of surveillance were to inform his photography-based work of this period, and is one of the most fascinating aspects of Thomas Ruff: Photographs 1979 – 2017, a retrospective that has opened at London’s enterprising Whitechapel Gallery. 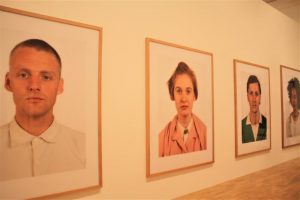 Known for taking a critical, conceptual approach to photography, he is described by the gallery’s director, Iwona Blazwick, as one of Europe’s greatest photographers. Ms Blazwick has with assistant curator Cameron Foote organised this exhibition, which reveals Thomas Ruff’s meticulous approach to his technique and subject matter.

He brings out the ambiguity of the surveillance society most vividly in two series.

One is Porträts (Portraits) from 1986–91, and from 1998 onwards. These are passport-style portraits beyond life-size, reproduced on a huge scale (210 × 165 cm), are startlingly frank, revealing close detail of the subjects. The young men and women in the portraits are their “views back into the Big Brother camera,” devoid of emotion and against plain backgrounds. Manning the camera, Ruff asked the sitters to remain conscious that they were going to be photographed – and the results have been categorised as anonymous, and completely anti-realistic. 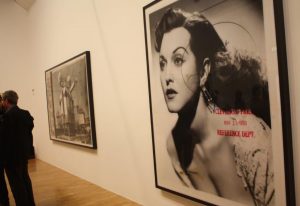 In another room, Nächte (Nights) (1992–96) is a series of 16 C-prints that followed news coverage of the first Gulf War, when night vision cameras cast their subjects in an eerie green glow. He recasts police (and television) observation methods by means of a montage unit originally used by the German force to create identikit images of suspected criminals. He took to the streets of Düsseldorf with the machine attached to his 35mm camera to produce the ghostly night images of buildings and traffic.

Close to Nächte are hung andere Porträts (Other Portraits) (1994–95), which again examine the technology and imagery of surveillance and policing.

From the 1970s onwards, the artist has worked in series, investigating the status of the image in contemporary culture, ranging across many technologies.

For the Whitechapel Gallery, the Thomas Ruff exhibition begins ‘at home,’ documenting an exhibition it staged in 1958 that marked the arrival of abstract expressionism with the work of Jackson Pollock. Those historic installation shots he retouched with his colour palette, his ‘canvas’ being essentially an unspoiled 19th century building.

Nearby in the ground floor gallery is L’Empereur (1982), a sequence of eight images which depict the artist in absurd slumped poses between two chairs. Made while he was in Paris and stumped temporarily for a theme on which to focus, he turns the camera on himself for a narrative still life.

Turning from the giant portraits, the viewer enters a totally different dimension, with Sterne (Stars) (1989–92), adaptations of photos of the southern night sky taken by the European Southern Observatory. For m.a.r.s. (2010 onwards), high resolution images were downloaded from the NASA website and compressed, before being treated with saturated colour. From the originally black and white representations of the Martian landscape, he makes the Red Planet green, and digitally changes the perspective. “Then I thought colour in space does not exist: maybe there are aliens with a completely different access to colour…” he mused.

Further large-scale works come under the title of 2004 jpeg (in this instance the initials stand for Joint Photographic Experts Group, a set of algorithms used to create digital images). Monumental pixelated images depict natural and man-made disasters. The inference is that we have our mobile phones to capture the catastrophic moment, after which we can shield our minds from that moment of horror.

Besides the dramatic, Ruff chronicles the mundane. Such are Häuser (Houses) (1987–91), studies of suburban buildings and streets, stripped of the presence of humans or even motor vehicles and shot in the style of architectural photography. Interieurs (Interiors) (1979–83), which documents rooms inside the houses of friends and acquaintances in Düsseldorf, are again devoid of human presence.

Two series derive from an even more intimate type of imagery. The nudes (1999-2002) are digitally processed and blurred images taken from internet pornography, but such adult content might be a contemporary manifestation of the art-historical genre of the nude, suggests the curators’ caption. Similarly, the Substrate (Substrates) (2001) are vividly coloured works adapted by software from Japanese manga and anime into unidentifiable abstraction. 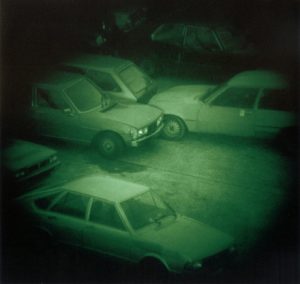 The final part of the exhibition touches on the powerful but transitory role of press photography. The Zeitungsphotos (Newspaper Photographs), conceived in the early 1990s, reproduce photos which the artist cut out of German newspapers and magazines. Without captions or headlines, they allude to events the meaning of which for all but the participants has since been lost.

In his most recent works (2015-16), named press++ he draws from half a century of newspaper archives including illustrations of the space race and of Hollywood stars. He sets out to trace how they are used by the picture editor in the pre-electronic era: showing the editorial marks, instructions, cropping and newspaper library file stamps. Ruff scans both sides of the prints, making the editorial inscriptions visible, and overlays them – transforming each image into its own archive

These give some insight into the emergence of the icons of geopolitics and of entertainment. An example is the monochrome photo of Connie Russell (1923-90) an American singer and movie actress: her image is stamped Cleveland Press Reference Dept May 13 1950.

Thus, he is constantly reworking archives and creating collisions of the old and new, as in his photography of 1930s factory machinery, and in his replicating of photographic negatives. 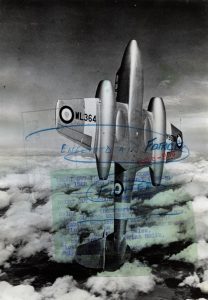 One might think that the current high-tension geopolitics and the images it has spawned would be ideal fodder for Thomas Ruff to rework – but for now he is sticking to dealing with historical material from the archives.

Ruff developed his serial methods during his studies in Düsseldorf, where he still lives. He was taught for several years at the Kunstakademie Düsseldorf by Bernd and Hilla Becher (they died in 2007 and 2015) who were noted for their photography of industrial structures such as water towers, blast furnaces, gas tanks, mine heads and grain elevators.

To coincide with the opening of the Thomas Ruff exhibition at Whitechapel Gallery, a selection of his monumental portraits of the late 1980s will be on display at the National Portrait Gallery, London. 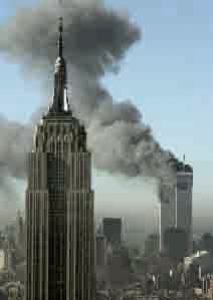