A life-line centre for seafarers officially opens under new charity 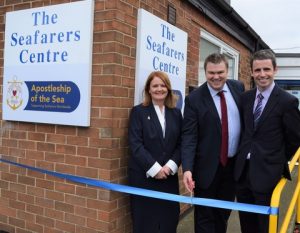 A centre which is vitally important for welcoming and supporting seafarers has been taken over by charity Apostleship of the Sea at ABP’s Port of Hull.

It will be run by a port chaplain and volunteers who visit ships in Hull, Saltend and Goole to provide seafarers with a range of welfare and emergency support services. The life-line centre at United House, King George Dock, was previously run by Humber Seafarers Services.

Being out at sea can be a lonely and dangerous job, for some, spending several months away from loved ones and the Catholic organisation helps by providing information about the local area, offering ways to contact family and friends and spiritual support no matter what their beliefs.

Chris Green said: “We’re delighted that Apostleship of the Sea has taken over the centre to ensure a very important job continues with giving our seafarers a warm welcome and a helping hand with anything they need to make their short stay as comfortable as possible.”

The Port of Hull is the biggest softwood timber importer in the UK and there are 40,000 shipping movements on the Humber each year.

“We are thrilled to be able to offer advice, practical help, care and friendship 24 hours a day to seafarers in Hull and Goole,” said Martin Foley, Apostleship of the Sea national director.

“90% of world trade is transported by ship, however crew out at sea can sometimes be forgotten, and our mission is to change this and to help make a place feel like home that is usually thousands of miles away from home.”

For more information about the Apostleship of The Sea Centre visit www.apostleshipofthesea.org.uk and for the Port of Hull visit www.abports.co.uk/Our_Locations/Humber/

ABP’s Port of Hull.Apostleship of the Sea
0 comment
0
FacebookTwitterLinkedinEmail

V-ZUG chosen by private superyacht, MY The Wellesley