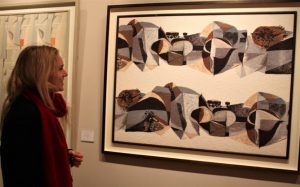 In the age of the robot, this is a refreshing celebration of the human hand and brain and the manual loom. 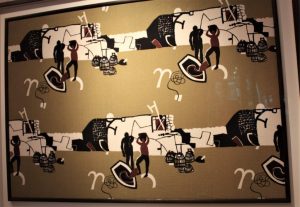 Presented by the fashion illustration, design and textile dealership Gray M.C.A. until October 7, 2017 at Gallery 8 in Duke Street St James’s, this show extols the revolutionary relationship between the modern artists and textile manufacturers of the mid- and late 20th century and designers and textile artists working in the same tradition today.

Modern artists’ textiles are a vital creative pillar in the story of modern and contemporary art, say husband and wife Ashley and Connie Gray, founders of the London business Gray M.C.A.

The textiles are a key element in appreciating more widely the works of the great masters, and the Grays are promoting some of the lesser known designs.

In the annual Styled by Design, visitors see how silk, rayon, woven wool and cotton provided a new medium for modern artists, allowing them to experiment with producing vivid textures and complementing colours that brought new life and a new audience to their work. 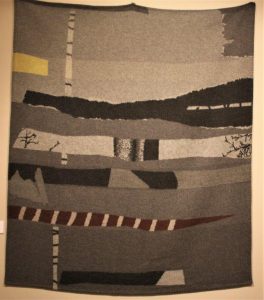 The diversity of fabrics bursts with dynamism that oil paints and acrylics are hard put to match.

Two textile houses can claim credit for furthering this ‘revolution.’ One is Edinburgh Weavers and the other is Ascher Ltd. Edinburgh Weavers was launched in 1928 as a branch of Morton Sundour, which had been one of Britain’s most important and influential textile businesses since the 1860s. Alistair Morton, a keen painter, took charge of the studio in 1931, keen to fuse modern art with textile design and keep it in step with modern living. They worked with some of the most exciting and powerful modern artists of the time, says Ashley Gray.

He says that the bold 1950s and 60s jacquard woven cotton designs for Edinburgh Weavers by Alan Reynolds and William Scott carry all the intensity of rich oil paintings.  The textiles were always produced in short runs or limited editions and are much sought after by collectors. 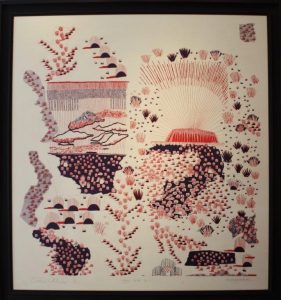 In the early 1940s, the Czech couple Zikmund (Zika) and Lida Ascher, who fled to Britain to escape the Nazis, worked hugely successfully with Henry Moore, having been moved by his drawings at the National Gallery in 1941 of Londoners in the Underground sheltering from German bombing.

The Aschers gained early fame with their Silk Square scarf designs commissioned from Piper, Matisse, Cocteau, Beaton and others. From this stable, silkscreen designs by Barbara Hepworth and Ben Nicholson are said to hold the same subtle delicate beauty as any watercolour. Both entrepreneurs were born in 1910; Zika died in 1983 and his wife in 1992.

Ashley Gray says in his catalogue: “Together Ascher and Morton truly lit the blue touch paper that allowed modern artists to widen their scope and challenge their skill, thereby ultimately highlighting their work on a central stage in modern home.” 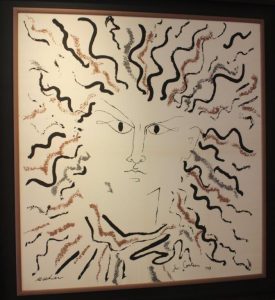 Textile firms such as Arthur Sanderson & Sons and David Whitehead Ltd followed and captured public attention in an innovative, multi-disciplinary manner, leaving a legacy that holds significance for the fine art and textile industries to this day.

Pablo Picasso (1881-1973) is represented by a printed cotton piece for the Congrès des peuples pour la paix, Vienna 1952.  This marked the third such ‘peace’ congress, in which Stalin sought to reorient the workers’ movements to his theory of peaceful coexistence by opening its participation to an array of intellectuals.

From acclaimed fashion designer Dame Zandra Rhodes comes Ayers Rock, a screen print in two colours on paper, signed and inscribed. Dame Zandra was fascinated when she saw postcards of the massive sandstone rock, known to the Pitjantjatjara people and others as Uluru, in the Northern Territory of Australia. After sketching and taking photos on site, admiring especially the effect of the sun on the landscape, she created screen-printed textiles, as the basis for a range of cloaks and dresses.

One of the younger practitioners is one-time advertising executive Tim Robinson, born in 1949, whose production Shorefrom 2015 was for Inigo Scout Textiles. It is in lambswool woven by Stäubli Jacquard machine. Shore features waves lapping on the pebbles at Aldeburgh, where he has a studio. Inigo Scout was established as a social enterprise in 2016 and commissioned works to be made at the 200-year-old Johnstons of Elgin mill in Scotland. 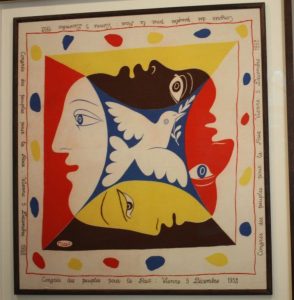 Mr Gray said of the collection as a whole: “These rare and powerful works underline the innovative genius of both the artists and the textile producers of the post-war era. Textile departments of leading art schools are increasingly echoing the creative vision pioneered by the modern masters of textile design.  Styled by Design celebrates both the modern and the new; when it comes to artist textiles, what is modern has never been more contemporary.”

Mr Gray insisted: “Today modern British art has never been in more demand, with prices rising every higher. It is a great tribute to the post-war textile visionaries of modern art that these now rare and powerful mid-20th century textiles are sought worldwide by collectors as beautiful and historically important works of art in their own right.” 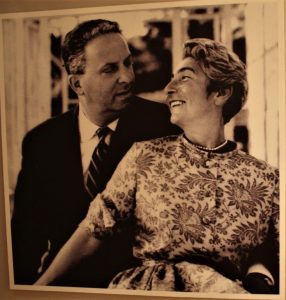 Hans and Elsbeth Juda, founders of The Ambassador magazine.

The exhibition includes a tribute to Hans and Elsbeth Juda, founders of The Ambassador magazine, which ran from 1946 to 1972. Beating the drum for British exports under the slogan “Export or Die!” the publication promoted fine art as an inspiration for design. Elsbeth (1911-2014}, known professionally as Jay, was a pioneering fashion photographer, and her husband Hans (1904-1975) was an editor, and they fled Berlin in 1933. In London they opened a branch office for a Dutch magazine called International Textiles, rebranding it in 1946 to support British manufacturing. The art critic Robert Melville described The Ambassador as “the most daring and enterprising trade journal ever conceived…no other magazine…has so consistently and brilliantly demonstrated the relevance of works of art to the problems of industrial design.”

During London and New York Fashion Weeks, Gray M.C.A runs the annual fashion illustration exhibition Drawing on Style. It was among those taking to the high seas in August 2017 for a fashion and fashion illustration preview on the annual Transatlantic Fashion Crossing of the Queen Mary 2. The Cunard Lines ship sailed from Southampton to dock just ahead of New York Fashion Week.

The BDI in search for survival…