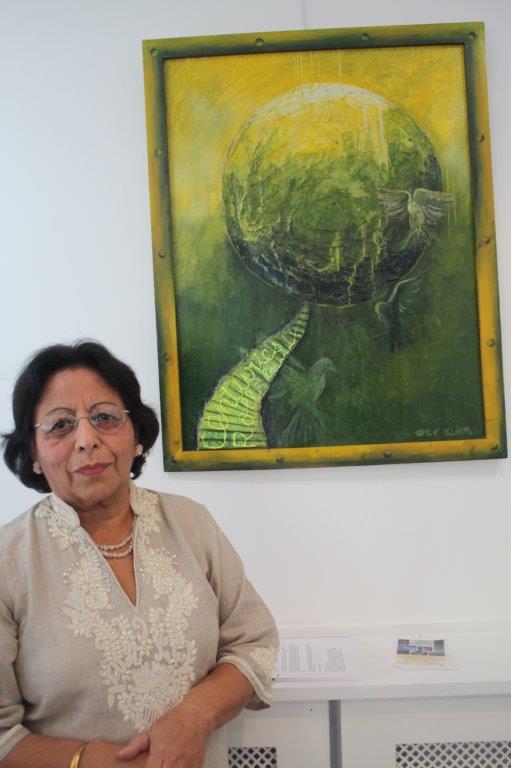 Sheila Malhotra with her canvas Swayambh.

Today’s artists – even those who live and work in city environments – are deeply attuned to nature, as is forcefully to be seen in a new exhibition at a decidedly urban setting in Chelsea.

From eerie sights at sea, to shining (and rain-buffeted) landscapes, to hybrid fantasies blending muse and myth, the contributions of two dozen thoughtful artists are presented in a wide range of mediums.

They throw light on some cosmic moments: metaphorical, spiritual, bodily and stratospheric.

Showcased in Elements III are artworks “weaving narratives that observe, question and acknowledge our interaction with the natural world and depicting our enduring relationship within it.”

At ease in the light and airy venue of Gallery 508, King’s Road, this is the “third chapter” in a series of Elements shows organised by Gabriel Fine Arts, a fine art specialist and event management company headquartered in the Canary Wharf district. 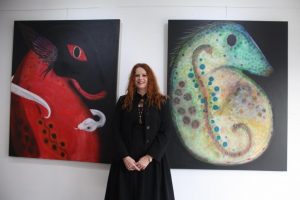 The themes are explored powerfully.

London-based Sheila Malhotra, who grew up in India, showed a key sequence in her Through a Portholeseries. This is Last Echoes of a Fading Millennium, her interpretation of the last solar eclipse of the 20thcentury

Four framed panels hauntingly trace four stages of progression of the ethereal phenomenon, as might be seen from a ship’s porthole. By means of mixed media on handmade paper, the whole is suffused with an eerie but exquisite tenebrosity.

Sheila captures the rarefied atmosphere as she chronicles the countdown to the moon occulting the sun through what she defines as stages I to IV. As the eclipse begins, birds in flight are seen to become disorientated; then they get together again; by the third picture, they have all gone to their nests.  In the sunless finale, the nebulous outline of a city is discernible and defiant of the darkness. “Only a faded echo remains in the dawn of the new millennium,” comments Sheila.

Her theme The world through a Porthole first took sail when she accompanied her husband, who commanded ocean-going merchant ships in his distinguished career. For Sheila, the porthole “was the only liberating link between the ship’s cabin and the world outside, giving flight to the soul itself.” 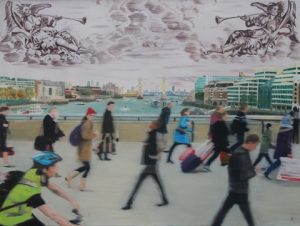 She observes the physicality of the ship cabin structure as well as its metaphysicality: from memory she includes the butterfly bolts that fastened the kind of portholes that were typical over many years on ’workhorse’ cargoships.

Turning her eyes from the eclipse, but still concentrating on the significance of chronology, Sheila furnishes a canvas in oil and mixed media with the title Swayambh which means in Sanskrit self-creating, self-manifested, timeless. Through an appended collage, Sheila highlights the attempts of the mainstream media to capture the essence of the passing of the centuries.

After the death of her 24-year-old niece in a road accident in India in 2009, Sheila initially found it hard to re-apply herself to painting. The tragedy spurred her to champion road safety awareness, photographing road conditions and the behaviour of drivers in the UK and India to incorporate into a campaign DVD. She became an active supporter of Brake, a UK road safety charity, and in India a charity named Save Life Foundation which has a parallel mission.

Sheila has exhibited in galleries in India and London and seen her paintings sold by leading auction houses, is also a freelance art critic. She is now firmly back on the exhibition scene, and is planning a solo show at a gallery in Mumbai in January 2018. 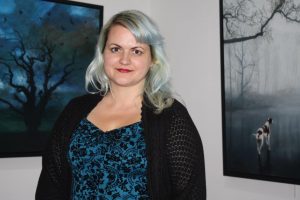 On the opposite wall at Gallery 508 were two of the large, ambiguously playful paintings by the ebullient Melissa Budasz, who describes herself as a “contemporary surrealist.” Her titles are Kiki, Sylvia and in the lower gallery Isabella.  These are part of her series The Muse is Exhausted, in which she creates hybrids of famed muses and mythical creatures.  The muses in question are independent and pioneering spirits, far more than mere adjuncts to the men with whom they are associated.

The three pictorial references are to: the confident, sexually-liberated Kiki de Montparnasse, an actress and singer who was model and companion in 1920s Paris for the photographer Man Ray; Sylvia Plath, the brilliant American writer prone to extremes of joy and despair, who took her own life while married to fellow poet, the erratic Ted Hughes; and Isabella Blow, the creative director who was the muse of hat designer Philip Treacy, and who is credited with discovering the models Stella Tennant and Sophie Dahl and the fashion designer Alexander McQueen.

In these pellucid portraits – part of a series which has counted 12 to date – Melissa has laid down boldly coloured images of solo creatures with blank eyes, the gaze turned in on themselves “and to the primordial goddesses of myth and imagination.” Coiled around or within these cellular bodies are snake forms – perhaps a reflection of serpentine human relationships.

Melissa explained that as a spur to her approach, she has lighted upon the life form daphnia, the transparent water flea. These primal creatures displaced in her consideration an earlier notion of basing her expression on the mythological, fallen priestess Medusa, who became a monster with snake hairlocks. Drawing snakes on that basis would make them look too totem-like, she decided. The daphnia was the creature most suitable for artistic transformation into mythical women and female roles.

Melissa has written: “These forms are a reflection of ourselves. In a world preoccupied with the communication of self and image and a culture of looking and being seen, these portraits pose existentialist questions of who and what we are.”

Her paintings are of charcoal, pastel, acrylic and spray paint on canvas. Pastel is important to her because “I love working with pigment.  It is like drawing with dust… it is like dead matter.”

Melissa is founder and editor of ArtVerve, a lively, not-for-profit, online journal about women’s art. For several years she was chair of South London Women Artists. She has a studio at Deptford and has curated and exhibited in several large-scale projects. Her most recent solo exhibition was at Conway Hall, London.

You never quite know what you are going to bump into, in a group exhibition. A version of a sight familiar to City workers is the subject of a striking oil on canvas, London Bridge, by Frances Featherstone, who although working from a studio in Sussex has frequently watched in all weathers scurrying, head-down commuters.  In her rendition, the “river of people” flows in a self-absorbed blur, without even a cursory glance at the mighty Thames and its distinctive riverbanks.

The sky is heavy, although towards the horizon the gloom may be lifting a little. This is not all that is going on, though.  In a marvellously uplifting touch, classically-delineated angels are from the scudding rainclouds sounding their trumpets to herald their presence – in vain, at this split-second, it seems.

Frances says: “Angels often appeared above pictures of the City hundreds of years ago and as eternal creatures should be watching us still… wanting to draw us away from the manic routines of each day in the capital to ask questions about the greater importance or otherwise of our everyday concerns.”

The cycle of life in the city rushes by and returns each day, so constant it becomes ‘still life,’ Frances observes.

She says that her paintings “explore how our identity is shaped by the spaces we occupy. I question our perception of the reality surrounding us by juxtaposing traditional imagery with the unexpected.

“I am fascinated by whether humanity belongs in its environment or is a stranger to it: whether humanity is the centre of the world, the only meaning that exists, or playing out an insignificant and meaningless play against the backdrop of a dramatic and infinite emptiness all around.”

Taken together, they can be said to go at least part of the way to fulfilling the ambitious exhibition criterion of “scrutinising the elements of earth, wind, fire, water; the universe in part or whole, and the unity we have with nature – reflected and transformed, from each grain of sand, each drop of water to each tiny particle of dust.”

Gabriel Fine Arts has launched a registered charity, Gabriel Enterprise, “to advance education in the performing and visual arts for children and young adults from socially and economically disadvantaged backgrounds and those with disabilities by providing free classes, mentoring and support.”

Artists on either side of the easel at...