Teddies all aboard for trans-European trip to Romania 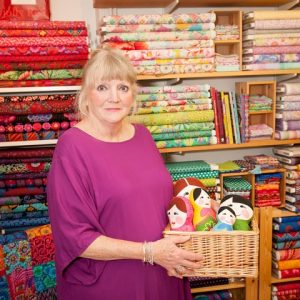 Kate Barnes in her haberdashery.

Teddies all aboard for trans-European trip to Romania

Once upon a time there were three bears, of the teddy variety, and now there are well over 170 of the cuddly creatures, on their way by road across Europe.

The bears are carefully packed in a huge truck in south west Wales, for the four-day journey to Romania. The trip is underway before winter sets in, otherwise it would be no picnic for the teddies or the driver.

Besides the bears, the cargo includes dolls, jumpers, mini-quilts and a dozen sewing machines. They are destined for distribution by the Romanian Aid Foundation, a UK-registered charity providing humanitarian aid, founded by Richard Burgess, who will be making the trip.

Support in this fabric form is lent by Kate Barnes, who runs the Calico Kate shop in High Street, Lampeter. A few weeks ago, she had collected just a handful of teddies for Romania, but in response to an appeal she put out, the number just grew, and grew.

Three of the first teddies to arrive.

Kate’s project is named Joy in a Box and she says it is an opportunity for people in the UK to send a small parcel of gifts to the disadvantaged in north east Romania, to spread happiness in the Christmas season. The current initiative culminated in a special Sew Saturday.

To celebrate her 70th birthday, Kate told contacts and customers in many parts of England and Wales that her aim was to fill 70 shoe boxes with gifts for children, and she has more than succeeded – “the best birthday present ever.” She adds: “As luckily my husband Peter [whose career has been in botany, writing and photography] has a birthday in January, instead of having a gift from me… another 70 children will enjoy his bears, my gift to him!” 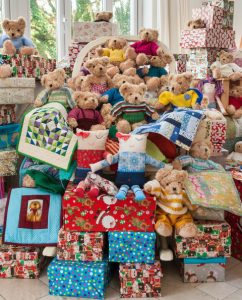 Collecting the bears and other items and packing them in boxes has been a big job, alongside running her haberdashery, and Kate says: “Life is over-flowing at the moment.  But full of love and joy!”

The Romanian Aid Foundation was established in 1997, and its activities in Romania are conducted through the charity Asociatia Neemia, based in Dorohoi in Botoşani county, part of the Romanian province of Moldavia.

Kate said: “We all remember the terrible pictures of the children in Romanian orphanages, back in 1990. Now those children are adults, and many are scarred by the neglect they suffered, and still need help. Joy in a Box is an opportunity for people here to send a small parcel of gifts to needy families and individuals in Romania.

“I also put out a call to see if anyone had a sewing machine still in working order or just needing a little tweaking to get it going again. Perhaps tucked away in a cupboard and not used since it was replaced with a super-duper one: Romania would love to have it.”

Richard Burgess has made some 90 aid trips to Romania, taking much-needed essentials. Along with other volunteers, he is helping build accommodation in the Dorohoi region, near the borders with the republics of Ukraine and Moldova. 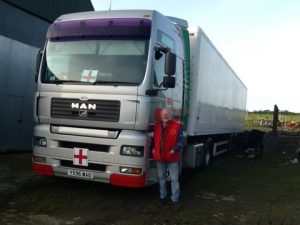 Richard gets truck ready to roll. Photo by Linda Burgess.

Kate said: “It was his generosity of spirit, time and resources, that prompted me to choose this way to celebrate my birthday. My gift to him was a Janome sewing machine, and this gave a young Romanian woman the chance to earn a living sewing.”

Customers and friends have donated more than 250 teddy-bear jumpers; sewn, knitted or crocheted more than 140 mini-quilts and blankets “to keep teddy cosy in his shoe-box”; made 15 rag dolls; knitted socks, hats, gloves, scarves and so on for children; and filled shoe boxes with gifts for young boys and girls.

The lorry can take up to 20 tons and is always packed to full capacity. Richard says he never takes any fresh air!

The load varies with each trip, and this season it includes lots of shoe boxes containing gifts – there are some 1,400 on board. Other items on board include good quality clothing for adults and children, blankets and duvets, food, school equipment, bicycles , cots,  pushchairs and other baby equipment,  wheelchairs and mobility aids. 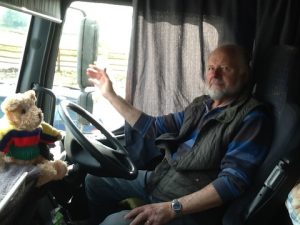 Support has come over the years from local schools, Women’s Institutes, Inner Wheel (a women’s organisation promoting ‘friendship with service’), churches, knitting groups, and many individuals.

The building project, known as Casa Neemia, is to provide long-term accommodation for 10 young men who have come from an orphanage or similarly deprived background. The men have been living in temporary accommodation detrimental to their wellbeing and relationships. Casa Neemia will be “a house – not an institution”

Richard Burgess said that much was done to improve conditions for the children and the staff of orphanages 20 years ago, but the youngsters are now adults, pushed out into a world with which they were ill-prepared to cope. Some have achieved a successful transition, settling down and starting their own families. It was not easy for orphans without family connections to find jobs, but many have done so. Others were left with psychological scars which make it difficult to integrate into every-day life. Some receive small medical pensions from the state, but most have no regular income.

He said: “Our big project Casa Neemia is nearing completion due to generous donations of both money and materials from the UK.   However, it will require continued support to fund the employment of suitable ‘house parents’ to ensure a successful future for these young men.”

Richard’s first trip was in 1992 just after the revolution when the media reported the appalling conditions in the orphanages.

Richard with teddy in a box. Photo by Linda Burgess.

He said: “Kate is a wonderful friend and her enthusiasm and creativity are infectious.   She has really enjoyed this project and so has her husband Peter.”

The Lampeter shop, with its 12 rooms, is located between the former town hall, home to the Welsh Quilt Centre, and a bank. A small town, Lampeter used to be a mainstay of the Welsh wool industry.

The store, established in 2002, is an “Aladdin’s Cave” for patch-workers, dressmakers, knitters and those who practice many related crafts.” Kate said: “My mother taught me to sew: what a wonderful gift she passed on to me. Without that gift there would be no Calico Kate!”