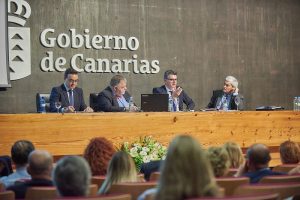 Capt. Antonio M. Padrón, IMO Maritime Ambassador, participated in the Conference on THE SPECIAL REGISTER OF SHIPS AND SHIPPING COMPANIES OF THE CANARY ISLANDS and the NEW PORT OF GRANADILLA, held in Tenerife

The conferences were held in the auditorium of the Presidency of the Government of the Canary Islands, with a large audience in which important shipping companies were represented as well as members of the local maritime and port community.

Capt. Antonio M. Padrón, Maritime Authority of Tenerife and IMO Maritime Ambassador, spoke on “The Special Register of Ships and Shipping Companies of the Canary Islands (REBECA)”, also explaining the progress made in the “Boarding Program for Maritime Cadets”, in which actively collaborate many of the companies present at the event. 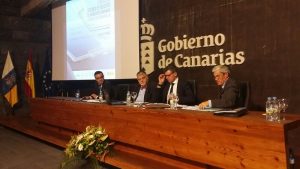 During the Conference, were analyzed proposals on the improvement of the advantages of the REBECA Register elaborated by ANAVE and the AEDM, and were described the facilities in the new port of Granadilla (Tenerife).

Autonomous technology: opportunities and challenges faced in shipping and transportation