Since the inception of LISW in 2013, SPNL has been an ardent supporter, with this year’s supporting event – which has become SPNL’s flagship event – was at Gordon Ramsay’s Heddon Street Kitchen. On hand to support the SPNL Board were SPNSW (Shipping Professional Network South West England) Board members Melina Baltatzi and Katerina Papanastasolopoulou. 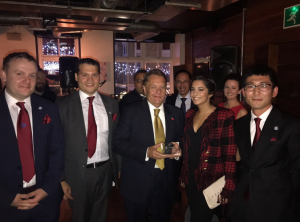 The event was exceptionally well attended with SPNL members mixing with likes of international visitors who flew in for the week to attend LISW, as well as senior industry figures with the signature event gaining a reputation as being the “fun networking” event of this shipping week.

Delegates were entertained by a classy jazz, Bernita & Guy, who provided subtle yet uplifting background music, while live entertainers in the form of a magician, dancers and Keith Lemon kept the crowd on their toes. 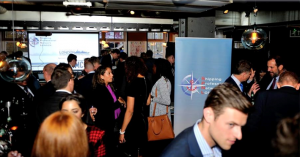 Drawing inspiration during his time with the United Nations Association (Westminster Branch), in 2015 SPNL Chairman, Claudio Chiste, launched the concept of a mentee branch in the form of SPNSW (Shipping Professional Network South West England).  The strategic objective being to nurture the “young shipping professionals of tomorrow”. Along the lines of the Model United Nations concept which is an authentic simulation of the United Nations (UN) General Assembly, or other multi-lateral body, introducing students to the world of diplomacy, negotiation, and decision-making.

Similarly, the mentee branch concept prepares students from Plymouth University, essentially being the young shipping professionals of tomorrow, for the business world which awaits – bridging the gap between tertiary education and the business world. With the creation of this platform where students can forge a relationship with not only their lecturers, but also industry professionals, building beneficial and relevant relationships for the future.

This level of exposure better positions the industry’s next generation as “young shipping professionals of tomorrow” for when it is time for them to enter the job market.