Is the BDI losing steam or… 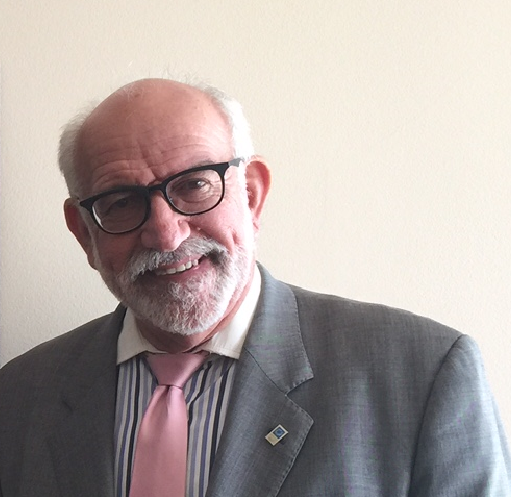 The BDI (Baltic Dry Index) just managed to gain four points since yesterday ending (?) the weekly surge, now standing at 1,666 points – one thousand above the number of the beast…The Geopolitics are getting worse, once again in all fronts… John Faraclas’ daily briefing:

The Panamaxes managed to gain 12 points with the BPI now reading 1,571 points.

No change for the Supras with the BSI at the same level as yesterday; 944 points…

All in all the Dry market remains enigmatic; CAUTION. Caution as neither one nor two sizes can dictate the Markets; this is because we have seen both Capes and Panamaxes make waves but these waves were / ae short-live… Caution…

Despite the surge we reiterate the view that shipping is heading to become shipping for the very very very few!!!! Coupled with the coming geopolitical events things will get difficult. We are living in interesting times! Add the fact that we are still 581 points below the 31st of Dec 2013 level – 2,247, and see what you get…

The WTI, as these lines are written, stands at US$ 57.60, too much for the poor masses world-wide to afford. This is a killer for the consumers and the economy at large! Ultra- caution must be observed!

The Geopolitical situation gets worse; every hour there is a major issue added to existing ones and this will lead soon to incalculable repercussions for all:

The MIGRANTS issue still on top worldwide and particularly in the Med. In Greece, three mayors from Greece’s biggest North-East Aegean Islands – Lesvos, Chios and Samos, gathered and staged a protest outside the Ministry of Immigration and together with a number of inhabitants invited the government and the EU to intervene. Later on they met prime minister Alexis Tsipras telling him in a nutshell that “enough is enough”. Congrats to Mayors Spyros Galinos, Manolis Vournous and Michalis  Angelopoulos for this move as the number on all three islands is five-fold and one cannot cope to have 2,800 to 3,500 in camps able to deal with only 800! It is also inhumane from any angle you can think of. Can prime minister Tsipras turn the scales with his EU counterparts, or all of them mickey-mouse about? SHAME!

The War in Syria and Iraq continues; there only 3,000 ISIS fighter on the ground; time to eliminate them and send the final message of victory but also the message that ISIS is been defeated. Time also to put on the dock all the remnants of ISIS and their suppliers of weapons, facilitations and other. Time also to settle the issue of the Kurds. Time also to create real peace in the Middle East, as the announcement of US president Donald Trump in recognising possibly tomorrow Jerusalem as Israel’s capital might ignite, sooner or later an all-out war in the region and beyond.

Turkey continues to be the stumbling block for Peace in the entire region, a region with a radius of 1,600 miles from its borders!!! A NATO member with EU membership aspirations, an occupant by force and blackmail with its backers on North Cyprus, a strange bedfellow with Russia, Turkey’s behaviour, unless changed will become a liability for all. Are they hopes than its president Erdogan strikes and honours a deal with Greece during his visit this coming Thursday?  Turkey on all fronts is in mess; mind the economical and financial issues as well as fraud and corruption.

BREXIT brings in the Shakespearean Tempest revisited!! Diplomatic and political brinkmanship must do the trick or else for the entire global economy and well being. Something very strange is going on… The Irish issue resurfaces in more fronts.

In Malta three men were charged for the murder of fearless journalist Caruana Galizia… Shame and pity!

Germany still without a government…

The EU has published its first blacklist of 17 tax fee haven counties… Watch this space… The fight of capitalist states against individual capitalists now erupts and we expect a full scale war on this; watch this space!!!

At the other side of the Atlantic, president Trump has to deal and succeed in too many issues… In the domestic front despite successes he has a lot of major issues to confront. Internationally, let’s hope the show of force over the Korean peninsula makes North Korean leader come down to his senses.

In the Far East now; in China a school ‘teaching women to be obedient’ closes down… 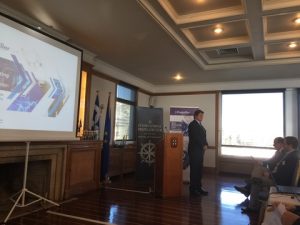 On another tone now, two great events took place at the Yacht Club of Greece; the first one was one of the best ever of its kind held, not just in Greece, but all over Planet Ocean! I do say this because we attend these specialist events and we have the right, with all due respect, to compare – in less than a month we attended the London event by Moore Stephens on the same subject, as well as over the last 30 years have attended more than sixty such events! The Propeller Club’s International Port of Piraeus BoD together with Moore Stephens’ Geek Office presentation on the “Ship Operating Costs: Current and future trends” wasn’t just a timely event – given what takes place in shipping during the beginning of this millennium and all the technological and other aspects affecting OpEx. 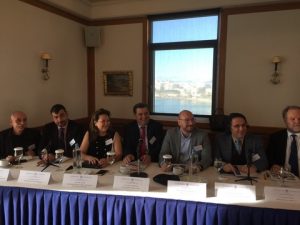 The panel of speakers

It was a super event on all counts particularly during these eight years of uncertainty in the markets and extended crisis: Firstly, the president of the Propeller Club Captain George Xyradakis’ synergy initiative to have Moore Stephens’ Richard Greiner as the lead speaker and the top brash of other guest speakers from Greece on the issue, attracted over 150 delegates and gave the chance for a great debate between the panel and all delegates representing the entire shipping’s spectrum stakeholders attending same! 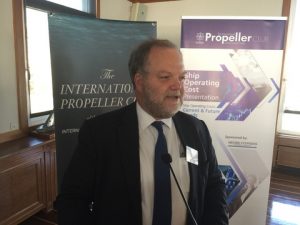 George Xyradakis being involved during the last 25 or so years with shipfinance and having also a brief career at sea, got the message for the need of an expanded and specialist panel and managed with his team to form a great panel comprised by Yiannis Kotsis-Giannarakis (HAMAC), Captain Panagiotis Drossos (Tsakos Columbia Shipmanagement), Maria Kouliga-Pavlou (Trinity Marine Services and president of  HCLBA) – the only woman speaker, Costas Constantinou (Moore Stephens Greece) who greatly contributed in the event, Constantinos Oiconomou (Marine Tours Group) and Prof. Yiannis Patiniotis from Carras Hellas and HAME). 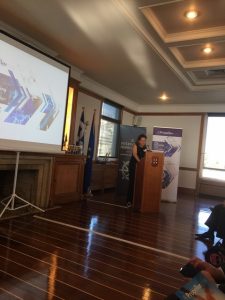 Secondly, Moore Stephens, possibly the best global accountancy and consultancy network entity and very much experienced in shipping matters have through the meticulousness of Richard Greiner and his team delivered a unique and simple slides presentation which was discussed at the launch that followed with interesting and positive comments. With our colleague Iris Liaskoni, we managed to talk and take the views of nearly 50 delegates and were impressed from what our on the spot survey revealed on More Stephens’ spherical approach to the issue as well as for the comments on the other speakers slides and speech presentations.  Safety and security from hackers was lengthly discussed. 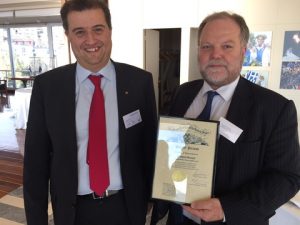 Will revert with a more detailed coverage including the panel’s presentations.

The launch was also great, well prepared by the Yacht Club of Greece chef George Moschovakis who was publicly congratulated by George Xyradakis and warmly applauded by all delegates. Did I hear you say svigos… A very pleased and content director of YCG, Commodore (Rt. HN) Anastassios Kavalis, also attended the conference. 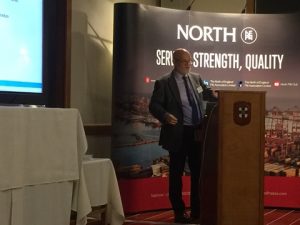 The Second event of the day was staged by the North of England P&I Association. North’s Greek Team headed by Tony Allen produced a more than a specialist and much needed event on the GDPR. Titled: “Are you ready for GDPR?” the event attracted, despite other events taking place nearby at the same time, nearly 100 delegates. The introduction and moderation by North’s very eloquent Gordon Robertson – deputy director /claims Greece. The panel with excellent slides: Ian Maclean from Hill Dickinson’s London office on “Understanding GDPR and the six month road map”; Stelios Vogiatzis from MAZARS on “GDPR: From challenge to opportunity”; Elias Tsaoussis from PPT legal on “Enforceability of GDPR-what has really changed and what ae the risks of noncompliance”; and finally one of North’s top guns: Adrian Durkin presented a “Case study, what North has done to comply”. 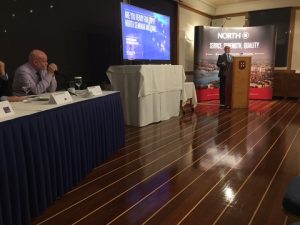 Andrian Durkin from the hosts delivering his paper

That was a very well prepared finale for a great issue which bothers many in the industry.  Interesting questions followed and more were aired during the buffet and drinks reception that followed. We hope the shipping industry will manage to ensure the safety of communications and ensure hackers stay as much as possible away…  General Data Protection Regulation (GDPR) and many of its issues will bother us for the foreseeable future unless we manage to learn (education, education, education). 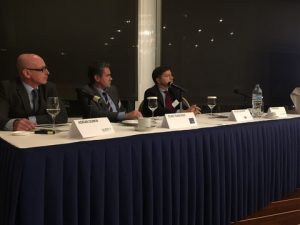 On both events today we were pleased to see that 55 percent of participants were young people; a good sign for all and in particular for the companies who supported their presence there!

That’s all for today, have a nice evening and once again – as always, we warn you to be on guard from Pirates and Terrorists looming in the background wherever you are on Planet Ocean!!!

Thank you for your report and overview of the situation.
Useful, credible and accurate as always.