The Celebration of Epiphany at Chios port 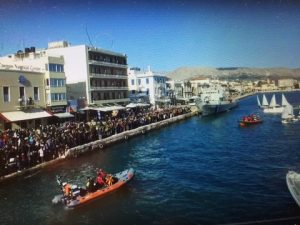 From the Holy Mass at Chios Port

The Epiphany also Theophany* – Theophania Θεοφάνεια in Greek or the Three Kings’ Day, is a Christian feast day that celebrates the revelation of God incarnate as Jesus Christ. In Western Christianity, the feast commemorates principally (but not solely) the visit of the Magi (Μάγοι) to the Christ child, and thus Jesus’ physical manifestation to the Gentiles.

All over the Hellenic World and in particular in the coastal regions and the islands the event ranks as the number one event of the year. Today, what a significance, the weather was more than friendly than any previous year; sunny and warm!

We bring you herebelow a link to watch today’s event and celebrations in the Port of Chios, Chios Island, Eastern Aegean, Greece, another exceptional work by Konstantine Milt. Anagnostou:

*In Greece, Cyprus and the Greek diaspora all over Planet Ocean, the feast is called the Theophany, or colloquially called the Phōta (Greek: Φώτα, “Lights”) and customs revolve around the Great Blessing of the Waters (Αγιασμός των Υδάτων) which marks the end of the traditional ban on sailing, as the tumultuous winter seas are cleansed of the mischief-prone Κalikántzaroi (Καλικάντζαροι), the goblins that try to torment God-fearing Christians through the festive season. At this ceremony, a cross is thrown into the water, and the men clamour to retrieve it for good luck. The Phota  (Φώτα) form the middle of another festive triduum, together with Epiphany Eve, January 6 (and eve of January 5), when children sing the Epiphany carols, and the great feast of St. John the Baptist on January 7 (and eve of January 6), when the numerous Johns and Joans celebrate their name-day.

Moreover, the Feast of Epiphany includes many events which are perpetuating the ancient Greek customs. In the perception of the Greek people, Epiphany is “Great celebration Theotromi”. For some even regions of Macedonia (West) are the biggest festival of the year and each new garment “protoforoun the lights to illuminate.” But when dogmatic The Baptism of Christ symbolizes the rebirth of man having so great importance, which is why until the fourth century Christians celebrated New Year in Baptism of Christ on January 6.-

In England, the celebration of the Night before Epiphany, Epiphany Eve, is known as Twelfth Night (The first night of Christmas is December 25–26, and Twelfth Night is January 5–6), and was a traditional time for mumming and the wassail. The yule log was left burning until this day, and the charcoal left was kept until the next Christmas to kindle next year’s yule log, as well as to protect the house from fire and lightning

Viewers can log in the internet and view the hundreds, could be thousands of events taking place in Greece, Cyprus and other places around the Globe where Greek Diaspora resides! They can also see over  50 (fifty) different places /nations customs. The best info comes from WIKIPEDIA.

An Epiphany to remember