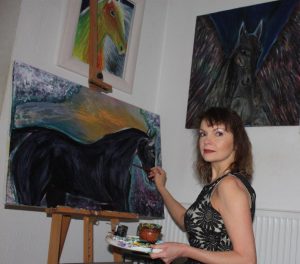 Pegasus, winged and divine; and the unicorn with its purity of heart: these untamed, equine creatures of fantasy have long been colourfully depicted by image-makers. The London painter Beata Korabiowska is reinvigorating the tradition, with her penetrating vision intimating the spirited attributes of these majestic beauties.

Beata’s versions of the legendary beasts – and other exotic permutations of the species – will be in her gallery of scintillating artwork on show at a business fair at the Hilton London Syon Park, west London, on February 8, 2018. 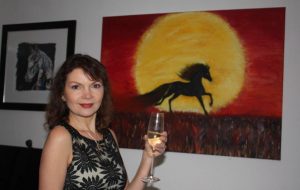 The Polish-born artist, author and poet, whose company is Beata Korabiowska Expressions and whose brand is She Horse, lives what might be called an equine-centred existence. She is devoted to expressing the wealth of human emotions through multiple perspectives predicated on the sentience of horses, sometimes incorporating the female form – her own.

Beata has clear perceptions of the significance of the winged stallion and of the unicorn, both of which featured in ancient Greek intellectual discourse.

Pegasus was supposedly born as a winged horse because his father Poseidon, god of the oceans, earthquakes and horses, was in the shape of the last-named when seducing Medusa, whose hair was then transformed into serpents by a jealous Athena. 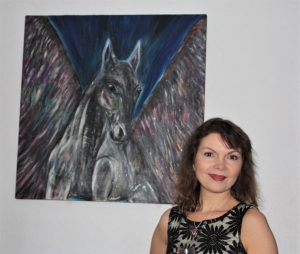 Pegasus: guardian to the artist.

Pegasus initiated his adventures by allowing the hero Bellerophon to ride him to defeat the fire-breathing monster Chimera, and symbolised the journey to heaven.

For Beata, Pegasus conjures up “beautiful magic, the stories, the fairy tales.” His presence means to love, to trust, being looked after. And fly away to the stars…don’t worry!” At the same time Pegasus is about respect: because something looks so delicate, make no mistake that a powerful kick from a horse can kill you easily, emphasises the artist.

Often depicted by others as pure white, Pegasus is given a more dynamic colouration by Beata, accentuating his supremacy in flight. It is scarcely surprising that Beata views Pegasus as inspirational: in Greek mythology, Pegasus was raised by the Muses at Mount Helicon overlooking the Gulf of Corinth. The Muses were the goddesses of literature, science, and the arts, in a supposition which finds echoes today fostering creativity. In the 19th century, Pegasus was associated with poetry – an aspect that further delights Beata. 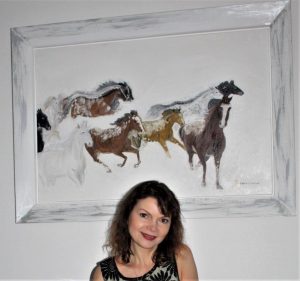 As to the unicorn, while not a part of Greek mythology, writers including Pliny the Elder and Aristotle mention the phenomenon in accounts of natural history, as they believed the creatures lived in faraway India – earlier these had been depicted in ancient insignia of the Indus Valley.

The unicorn came to be a symbol of purity, grace, innocence, and female energy. (Leonardo da Vinci wrote in one of his notebooks: “The unicorn, through its intemperance and not knowing how to control itself, for the love it bears to fair maidens forgets its ferocity and wildness; and laying aside all fear it will go up to a seated damsel and go to sleep in her lap, and thus the hunters take it.”)

Beata reminds people that this gentleness is but one side of their character. She says: “Unicorns have this horn that gives them the power, because they are fearless. Though they look pretty, they are saying: don’t mess with me. The horn is their weapon if they need to use it. It is a very powerful tool that can kill. The unicorn is like a rose that while pretty, still has thorns.” 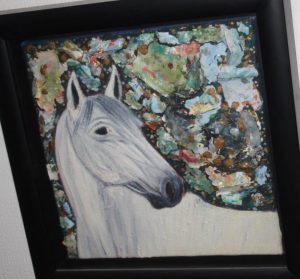 This reserve ammunition is characteristic of the entire equine family, for instance with Arabian horses which are petite: “the power and strength the horse has should not be underestimated. While they are elegant and graceful they are ready to ‘give you a kick if you mistreat me’.”

Beata started her artistic career under disapproval.  She got into trouble for sketching horses in her book during a school maths lesson.  Others in her circle were more appreciative and inspirational. In her adult treatment of the form, she senses the cold blood, warm blood in turn of her subject matter, and speaks of the wisdom gained through riding and exploring, “taking that as part of your enrichment.”

Loyalty is a hallmark of the horse. “The seasons come and go, and she is waiting.”

One of her most dramatic pictures is called Integration. Manes streaming, horses flee from what could be a pack of wolves. One of them in the lead of the flight from danger changes course. Because it all happens so quickly the individuals can get lost. They are used to having a leader and they get confused. This makes integration, paying attention, a matter of life and death. 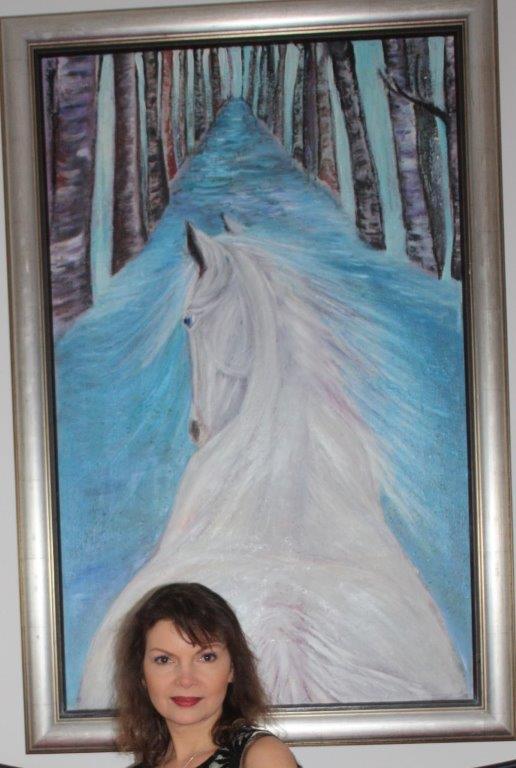 When she decides to portray a horse, she sets out to make it strong, “but at the same time I am able to change the emotion into one of peace.”

In some cases, she uses as a medium linseed oil, which gives a more fluid result, and in others eases in nail varnish with her fingers to give natural glitter and a 3D effect.  Sea Horse is an example of her imaginative use of materials. She is unafraid to experiment “because these are my creations, and this is how I want this painting to look.”

Resolutely upbeat in life, she is ever determined to forge ahead, “despite…” she says, leaving her listener to fill in the rest of the phrase. She is drawn to the study of meridians, the bodily energy channels said by ancient civilisations to transport life force that can tackle stress and other ailments.

The event at Hilton London Syon Park is part of Hounslow Festival of Business 2018, described as “the premium showcase for businesses across west London”.

Hilton London Syon Park is noted for its splendid pastoral setting on the edge of the 200 acre Syon House estate, a country home for the Dukes of Northumberland for 400 years, and thus the last surviving ducal estate in Greater London. Syon House boasts Robert Adam interiors and an extensive art collection assembled by the Percy family. The hotel is off the A315; 15 minutes’ walk away is Syon Lane station with a direct line to Waterloo.

Hounslow Festival of Business 2018 is on February 8 at the Hilton London Syon Park, from 10am to 4pm. Beata Korabiowska Expressions website is www.beataexpressions.co.uk

This is a fine artist who does lovely work. Hopefully we will see more of her and her work elsewhere.