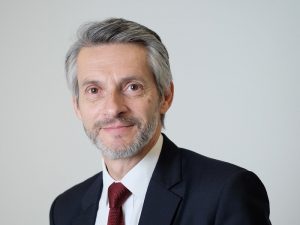 Grant Hunter Head of Contracts and Clauses at BIMCO

BIMCO has taken a big step forward and launched an innovative new solution for editing contracts. The solution is called SmartCon, and it makes contractual work easier and more secure. The product was launched at an event in Singapore today (Thursday 18 January 2018).

“SmartCon is a brand-new approach to contract editing, we believe that it will significantly ease the work life of our current users and will attract new users to BIMCO’s contract universe,” says Grant Hunter, Head of Contracts and Clauses at BIMCO.

The key innovation in SmartCon is that the features are built into a Word document, which will integrate and merge seamlessly with the normal workflow of shipping professionals and legal staff. The contracts can be shared until it is fixed, without security risks, as everything is protected and authenticated by Microsoft’s Cloud security infrastructure. 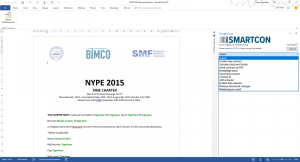 “Our contracts are widely used around the world, which provide greater certainty of the intended commercial outcome – helping the users manage their contractual risk,” says Grant Hunter.

SmartCon replaces IDEA, which handles close to 40,000 contracts a year, and was introduced in 2000.

BIMCO is the largest shipping organisation in the world. It is best known for drafting standard contracts and clauses for the maritime and offshore industry. Providing the contracts in an editor is a natural extension of that focus.

The SmartCon contract editing software has all of IDEA’s software features, but is now based on an encrypted Word-document, which provides additional security, significantly enhanced editing functions and dramatically reduces complexity. In addition, it has context sensitive explanatory notes, direct access to eLearning modules and members can write directly to BIMCO’s Support & Advice function.

“We see it as a full ecosystem for shipping professionals working with contracts,” says Grant Hunter.

An authentic contract can be opened using the software, and then edited and changed as required, however the editing does not compromise the integrity of the document. The changes can be seen by both parties and the core features, which make it a binding legal document, cannot be removed.

Thirty-five of BIMCO’s most popular contracts are available in SmartCon today, with more to be added. The available eLearning modules will be limited at launch.

Security in the cloud

BIMCO has used a suite of Microsoft’s Cloud technologies to offer a ‘solution as a service’ product (see appendix), which eliminates existing internet bandwidth issues and increases the number of potential users.

The development of SmartCon was made possible by several recent advances in the Microsoft universe, including the advent of Office Groups.

SmartCon customers can use multifactor identification, for example through Microsoft’s app, where opening a document requires an additional code to be sent to the user’s phone. In SmartCon, BIMCO does not store user information – everything is in Microsoft’s cloud and protected by Microsoft’s technology.

“BIMCO has wrapped our technologies into a creative and novel package to offer a valuable service to its subscribers, and it potentially shows the way for other industries that frequently use standard contracts,” says Lasse Svane Ryby, Business Group Lead, Cloud and Enterprise at Microsoft Denmark.

SmartCon will be further developed with new features as the technology becomes available. ​